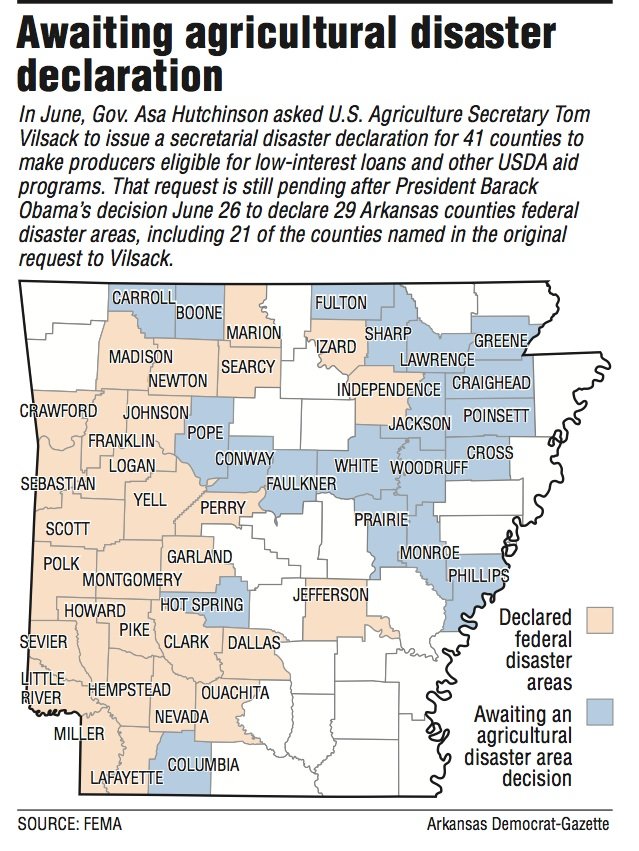 Nearly half the counties named in letters from Gov. Asa Hutchinson seeking help for farmers with flooded fields and lost crops failed to make the cut when federal officials issued a presidential disaster declaration June 26.

On Friday, Ward said he was unaware that several of the counties identified in the two letters had yet to be declared eligible for agricultural disaster aid. But in checking with U.S. Department of Agriculture officials, Ward said he learned that the aid request is still pending.

"The presidential declaration opens up the [Farm Service Agency] loans for agricultural producers, but it doesn't make the secretarial designation request go away," Ward said. "So the secretarial request is still being requested through USDA Secretary Vilsack."

Both kinds of declarations make producers eligible for low-interest loans. The USDA has other programs available if a disaster strikes farmers.

Asked about the difference between the declaration that was issued and the one still pending, Ward said it appeared that officials who prepared the lists wanted to move as fast as they could to make aid available.

"The explanation was really just everyone was in just such a hurry to try and help people that the lists were a little bit different," Ward said. "The presidential list had some counties that the secretarial one didn't and vice-versa.

A spokesman for the governor's office referred questions to Linda Newkirk, executive director of the USDA's Farm Service Agency office in Arkansas.

Newkirk serves as chairman of the Arkansas Food and Agricultural Council, which recommended that Hutchinson seek the secretarial disaster declaration from Vilsack. The council is made up of representatives of various USDA agencies in Arkansas.

Tony Franco, chief of the agency's farm programs division in Little Rock, said either disaster designation makes low-interest loans available to eligible farmers. However, federal law allows the USDA to provide help to counties contiguous to those designated as disaster areas. That means that growers in another 27 Arkansas counties, including most of 20 counties not included in the presidential disaster declaration, could be eligible for loans.

Heavy spring rains flooded tens of thousands of acres across the state in April and May, flooding planted fields and keeping other fields too wet for farmers to plant. Additional rain in June kept fields moist as water backed up into tributaries. Heavy rains in southern Arkansas over the July Fourth weekend flooded many other fields.

Hank Chaney, chairman of the Faulkner County Cooperative Extension Service office, said Friday that he was unaware that his county hadn't been included in the federal disaster declaration.

Chaney, who helped organize a June 8 meeting in Morrilton attended by more than 40 farmers who work in the Arkansas River Valley, said that with lost crops and delayed planting, many producers are counting on access to federal assistance to tide them over.

Another county cooperative extension staff chairman, Phil Sims of Pope County, also was unaware that the secretarial designation hadn't been made for his county. Sims said he recalled participating in the damage assessment needed for the initial June 8 request made by Hutchinson.

Typically, beneficiaries must live in a designated county to be eligible for most federal help authorized through a presidential disaster declaration, Krista Guthrie, a spokesman for the Arkansas Department of Emergency Management, said Friday.

Guthrie said her department handled only the presidential declaration process, adding that the USDA secretarial designation is done separately.

The presidential declaration offers individuals and businesses help that includes grants for rental, home repairs and unemployment, as well as low-interest loans for property damage not covered by insurance and business loans to off set cash flow problems or working capital. A presidential declaration also allows for loans of up to $500,000 for farmers, ranchers and aquaculture operations to cover production and property losses.

Ward expects Vilsack will soon issue the secretarial designation to give producers in the remaining counties access to additional help.

"Everyone is still expecting it to be granted and for the secretary to sign it," he said. "Any day now, hopefully, we'll have an answer."