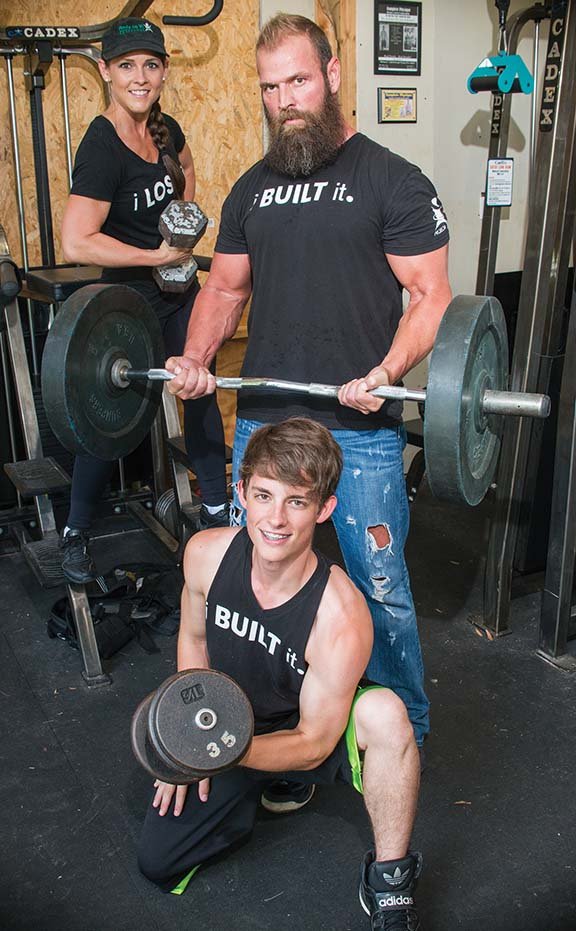 Rebecca Todd met Michael Todd, standing, while he was serving as her personal trainer in 2011. Spending a lot of time together, the pair then realized they had a lot in common, which led to them getting married. The marriage also resulted in Rebecca’s son, Ryan Morin, bottom, joining the couple’s fitness endeavors. Now, all three are world champions after each won their respective division of the Ultimate Armwrestling League championships earlier this year.

Family time can mean a lot of things. Some families prepare a meal together and play board games after dinner. Others take a trip to the zoo or have a family TV show that they watch. The Todd family might curl up and watch TV at their Hot Springs home with their two pit bulls once in a while, but a couple of unique hobbies unite them every day — arm-wrestling and physical fitness. Michael and Rebecca Todd, as well as their son, Ryan Morin, brought home world championship titles in this year’s Ultimate Armwrestling League championships.

“Monster” Michael Todd forged a relationship with Rebecca, now his wife, while he was her personal trainer in 2011. Rebecca, a nurse at the time, was the most out-of-shape she had ever been when they met. Her son, Ryan, had never shown interest in physical fitness until he was around Michael. After seeing how much weight his mother had lost, Ryan decided he wanted to build muscle — his friends had begun to make comments about his mother being “more buff” than him.

“I was at my heaviest at the time I was looking to get in shape,” Rebecca said. “I started out [training with Michael]. About five weeks into the personal training, he had started this thing called the 90-day challenge. I didn’t know much about it. I’m not sure that he knew anything about it. He just told me I needed to do it; it would work well with my program. Through working that challenge together — working out together — we found that we had a lot in common, and we fell in love. We were married last year, July 4.”

The 90-day challenge the two completed was the Body by Vi challenge, which is one of the ways ViSalus, the company for which all three now work, promotes its products. ViSalus sells specialized kits of meal-replacement shakes to accomplish various body goals.

So this newly formed family embarked on a personal-fitness journey together. Rebecca and Ryan were trying to change their body composition, and Michael was using the challenge to bond with his wife and stepson. Michael was already established as an arm-wrestling champion, but his family decided to compete in their respective classes as well.

Ryan, 14 at the time, was struck by the physical transformation his mother was experiencing. But the changes weren’t apparent at first. Instead, the watchful eyes of his friends recognized the changes and pointed them out to him. Ryan said his friends made it known that his mom had more muscle than he did. That’s all the motivation he needed.

Michael said he was skeptical of the challenge in the beginning, but after his experience, he believes the program has improved his fitness level. He said he hasn’t been pinned since becoming involved with ViSalus and that he has won eight of his 17 world titles while promoting the company.

Once Ryan began arm-wrestling, he started to hold practices at his house after school. He gathered approximately 15 of his peers from Glen Rose High School, where he graduated this year. Some of his practice mates began competing as well.

Michael and Rebecca also promote Project 10, and an offshoot program called Project 10 Kids. For every 10 pounds someone loses or gains — depending on their fitness goals — with Michael or Rebecca’s help, ViSalus donates a 90-day supply of its meal-replacement shakes to the Arkansas Hunger Relief Alliance, which distributes the donations to children in the community.

Michael and Rebecca recently completed a 90-day challenge that consisted of attaining a fitness goal and completing an active component. The active component for the couple was their participation in the United States Armwrestling Federation’s National Armwrestling Championships in Las Vegas. Michael and Rebecca are also eligible for selection as Body by Vi USA Central region champions in the couple active fitness category. The champions are selected in part by fan voting cycles that take place on Sundays until a winner is declared at challenge.com/champions/vote/2964029. A judging panel makes up the other half of the voting equation.