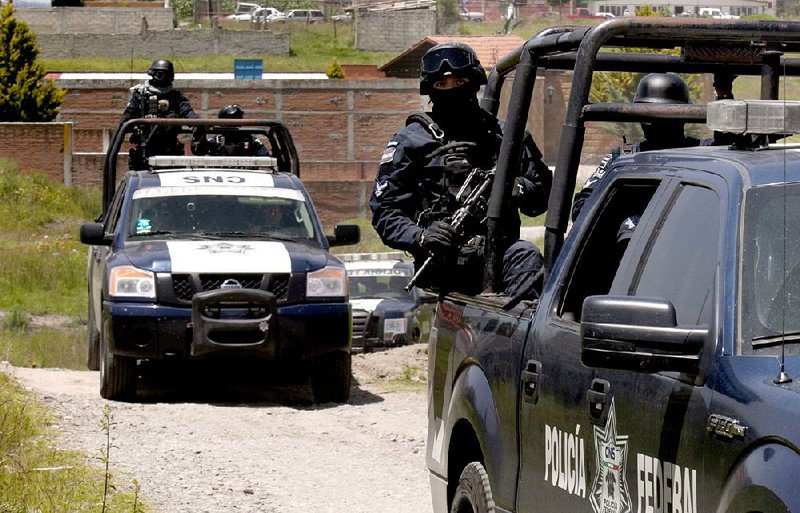 Federal police stand guard Monday by a half-built house near the maximum security prison in Almoloya, Mexico. A manhunt that included highway checkpoints, stepped-up border security and closure of an international airport failed to turn up any trace of Mexican drug kingpin Joaquin “El Chapo” Guzman.

The internal DEA documents reveal that drug agents first got information on escape plans in March 2014, about a month after Guzman was captured in the Mexican seaside resort city of Mazatlan. Various Guzman family members and drug-world associates were considering "potential operations to free Guzman," the documents show.

But a U.S. official briefed on the investigation confirmed to The Associated Press that the Mexican authorities were alerted about the plots. The official spoke on condition of anonymity because he was not authorized to disclose details.

Since the 1990s, Guzman's violent and powerful cartel has been known for digging sophisticated smuggling tunnels under the U.S. border with Mexico. Guzman was first arrested in 1993 but escaped from one of Mexico's top-security prisons, in Jalisco, in January 2001, allegedly by hiding in a laundry basket. He evaded capture in early February 2014 through an elaborate network of tunnels that connected multiple safe houses in Culiacan, in his home state of Sinaloa, and was arrested again two weeks later.

Jim Dinkins, the former head of Immigration and Customs Enforcement's Homeland Security Investigations unit, said that Guzman's history of tunneling makes Saturday's escape "really ingenious." The sophisticated tunnel described by Mexican authorities would usually take about a year and half to two years to complete, Dinkins said, suggesting it was started almost immediately after Guzman's arrest in 2014.

The DEA documents do not include details of how the previous escape plots would be carried out. In them, Guzman is identified as Guzman-Loera.

DEA agents did not have information about the plan that was carried out Saturday night, when Guzman escaped through an underground tunnel in his prison cell's shower area, allegedly built without the detection of authorities.

Guzman slipped down a shaft from his prison cell's shower area late Saturday and disappeared into a sophisticated mile-long tunnel with ventilation, lighting and a motorcycle apparently used to move dirt.

A widespread manhunt that included highway checkpoints, stepped up border security and closure of an international airport failed to turn up any trace of Guzman by Monday, more than 24 hours after he got away.

The White House said Monday that U.S. Attorney General Loretta Lynch spoke with Mexico's attorney general the day after the escape was discovered. White House spokesman Josh Earnest said the U.S. government has offered its full support to Mexico. He pointed out that Guzman has also been charged with serious crimes in the U.S.

The documents revealed that in March 2014 agents in Los Angeles reported a possible escape operation funded by Rafael Caro-Quintero, who helped orchestrate the 1985 kidnapping and murder of DEA agent Enrique "Kiki" Camarena. That plot involved threatening or bribing prison officials. The same investigation revealed four months later that Guzman's son had sent a team of lawyers and military counterintelligence personnel to design a break-out plan.

In December of that year, agents in the DEA's Houston Field Division reported that a Mexican army general stated "that a deal was in place to release both Guzman-Loera and imprisoned Los Zetas Cartel leader Miguel Angel 'Z-40' Trevino-Morales."

Information for this article was contributed by Mark Stevenson of The Associated Press.