2 barriers down for Greece's bailout 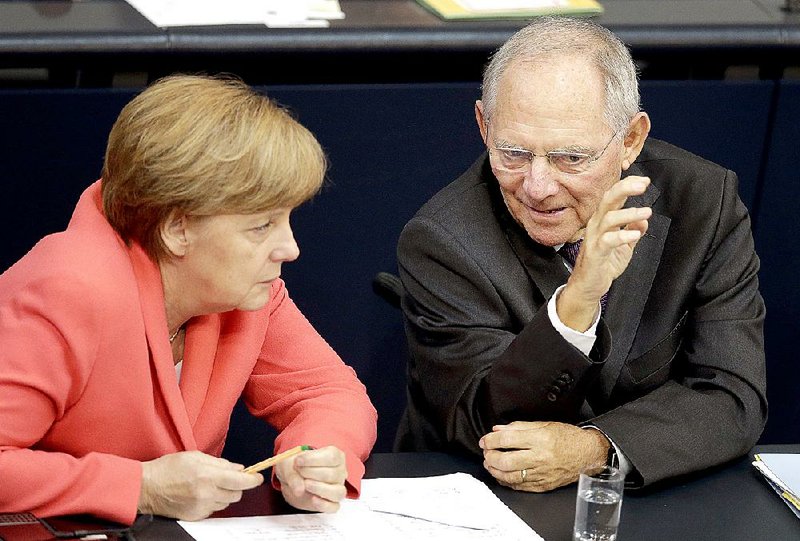 ATHENS, Greece -- Greece's proposed bailout cleared further key hurdles Friday after German lawmakers overwhelmingly gave their backing to another financial rescue and the European Union said it would release a short-term loan to ensure Athens avoids a debt default in the meantime.

The developments, along with the Greek Parliament's approval early Thursday of creditor-demanded austerity measures, contributed to a positive initial assessment from Europe's bailout fund. In a statement, the European Stability Mechanism said it approved a "decision to grant, in principle, stability support to Greece in the form of a loan program."

Prime Minister Alexis Tsipras, meanwhile, reshuffled his Cabinet after opposition to the austerity measures this week by party members. He replaced two ministers who voted against the measures and ousted several other ministers and deputy ministers.

The broad outlines of the Greek bailout were agreed upon Monday by the 19 leaders of the eurozone, the group of countries that use the euro currency. But the European Stability Mechanism's decision formally kick-starts the process by which Greece begins negotiating the details.

The discussions, which are expected to last four weeks, will include economic targets and changes deemed necessary in return for an expected 85 billion euros over three years. At the current exchange rate, 1 euro equals about $1.08.

"This agreement offers a chance to put the Greek economy back on track," said Jeroen Dijsselbloem, the eurozone's top official, who also is chairman of the European Stability Mechanism board. "It's not going to be easy. We are certain to encounter problems in the years to come. But I believe we will be able to resolve them."

In recent weeks the Greek economy, which is about a quarter smaller than it was in 2008 after a long recession, has suffered a number of shocks with the country's euro future on the line. The new bailout would be Greece's third in five years, and it was negotiated with the goal of keeping the country in the eurozone.

The hope now is that the banks, which have been shut for the past three weeks, will reopen soon -- possibly as early as Monday, officials have said -- and that the 60-euro limit for daily withdrawals at ATMs will be raised.

The first big development Friday was the news that German lawmakers, following their Austrian counterparts, voted 439-119 in favor of opening detailed discussions on the bailout package. Chancellor Angela Merkel had warned them Greece would face chaos without a deal.

That was later followed by confirmation that the 28-country EU will release a loan of 7.16 billion euros in short-term cash by Monday, when Greece has a 4.2 billion-euro debt repayment due to the European Central Bank.

The funds, which will come from a long-dormant EU program called the European Financial Stabilization Mechanism, also will help Greece clear arrears with the International Monetary Fund and with the Bank of Greece.

The loan will be for three months and will be disbursed over two installments. It was announced a day after the European Central Bank raised emergency liquidity assistance to Greek banks.

"What we're witnessing is European solidarity in action," said Valdis Dombrovskis, the EU commission's vice president for the euro.

"Politicians across 27 countries have invested their own political capital to speed through national decisions to shoulder Greece at this difficult time for the country," he added.

But International Monetary Fund Managing Director Christine Lagarde injected a warning, saying she disagrees with the EU over debt repayment terms for Greece. She reminded European leaders that they still may need to give more help to Greece.

The agreement to negotiate a bailout won't be enough to keep Greece in the eurozone unless its creditors also lower the country's debt burden to boost its growth prospects, Lagarde said in a radio interview Friday.

Lagarde was asked on France's Europe1 station whether the accord is viable without debt restructuring.

"The answer is quite categorically not," she said.

Extending repayment periods or lowering interest rates may have to be the mechanism used, Lagarde said, since hard-liners like Germany, Finland and the Netherlands are refusing to consider reducing their claims on Greece.

Germany is likely to continue playing a key role in Greece's future as it is the largest single bailout contributor.

It has taken a hard line, insisting on stringent spending cuts, tax increases and wide-ranging economic changes in return.

"The principle ... of responsibility and solidarity that has guided us since the beginning of the European debt crisis marks the entire result from Monday," Merkel told the special session of Parliament.

The alternative to an agreement, she added, "would not have been an orderly exit from the euro ... but predictable chaos."

Merkel will have to return to Parliament to seek approval for the final deal when the negotiations are concluded.

"I know that many have doubts and concerns about whether this road will be successful, about whether Greece will have the strength to take it in the long term, and no one can brush aside these concerns," she said.

"But I am firmly convinced of one thing: We would be grossly negligent, even irresponsible, if we did not at least try."

Bailing out Greece hasn't been popular in Merkel's conservative bloc, and 60 of its lawmakers failed to back her Friday, with another five abstaining.

In Athens, Tsipras made changes to his government after nearly a quarter of the lawmakers from his leftist Syriza party voted against the austerity proposals.

The austerity measures, which include consumer tax increases and pension cuts, passed with a large majority thanks to the support of three pro-European opposition parties. But the opposition within his party left his government wounded ahead of another parliamentary vote Wednesday on further measures.

After the vote Thursday, Tsipras told his associates that he would be forced to lead a minority government until a final deal on the bailout is reached.

He said the split on the austerity vote was "an open wound in our party at a critical time."

He continued: "Personally, I cannot allow anyone, after what I've been through in the past six months, to think they have a stronger conscience dilemma than I do, towards our common principles, values, views and ideological references."

Among the Cabinet changes announced Friday, Tsipras replaced Energy Minister Panagiotis Lafazanis and Alternate Finance Minister Nadia Valavani, and ousted Alternate Social Security Minister Dimitris Stratoulis, all of whom had voted against him on the austerity bill. Valavani had announced her resignation immediately before the vote.

The bill angered many within Syriza and its junior governing coalition partner, Independent Greeks, for insisting on the very austerity the government was elected to repeal after five years of belt-tightening demanded in return for two international bailouts. Greeks also voted to reject milder creditor austerity proposals in a referendum July 5.

Tsipras has acknowledged the package he signed went against his election promises but insists he had no other choice, as the alternative would have seen Greece forced out of the euro -- a development that most experts say would have caused widespread short-term damage to the Greek economy.

Greece has relied on bailout cash for five years after it was locked out of international bond markets on concerns over its ability to repay its debts.

Though the austerity implemented by successive governments in return for 240 billion euros' worth of rescue loans reduced the annual budget deficit, Greece's debt burden has swelled to around 180 percent of annual gross domestic product because of the economic contraction.