Miss USA contestants tripped up by Q&A, not heels 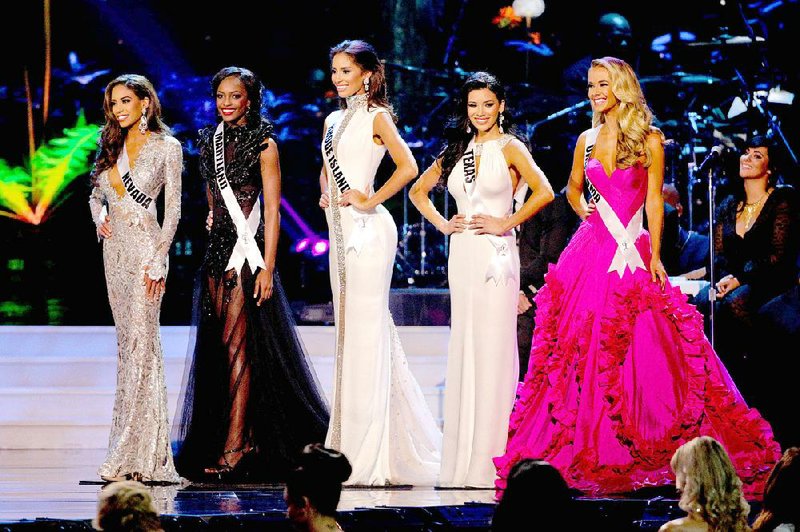 But last Sunday we wondered if the USA didn't stand for something else: Unusually Stupid Answers.

Perhaps you didn't see the pageant -- after all, it was relegated to Reelz, a small cable channel, after NBC cut ties with pageant owner and presidential candidate Donald Trump after he made controversial comments about Mexican immigrants.

Heck, even Trump didn't see the pageant; at least he didn't attend the event in Baton Rouge, tweeting the night before: "I will not be able to attend the Miss USA pageant tomorrow night because I am campaigning in Phoenix. Wishing all well!" A spokesman told CNN he didn't have any official campaign events that Sunday, but Trump was traveling back to New York, and that apparently Trumped the pageant.

Judge Tara Conner, Miss USA 2006 -- best known for her past publicized underage drinking and admitted drug abuse -- asked a question of Miss Rhode Island USA Anea Garcia: "Recently, comedian Jerry Seinfeld spoke out against political correctness in our culture. Do you think political correctness is hurting or helping this country and why?"

Rhode Island began, "That's a very good question. I think it's a balance of both. Definitely, we need ..." and following a long pause said, "I'm sorry, please repeat the question." She had already forgotten that "very good question." Hmm, did Garcia get into Conner's stash?

Then Conner -- now 81/2 admirable years sober -- posed it again. Rhode Island made a second attempt, managing to stammer out, "I think that it's a balance of both."

But it went downhill from there: "We need the people to remind us, especially politicians, to remind us what to do right and when to do wrong ..." before the timer chimed, putting her -- the other ding-a-ling -- out of her misery.

Miss Nevada USA Brittany McGowan also stumbled with her question: "What would you do to improve race relations in the U.S.? Please be specific."

Realizing that her rehearsed "Strive for world peace" speech might not cut it, McGowan had to go off script: "What I would do to improve race relations in the U.S. is get more races grouped together and be able to be with each other in a ... in a non ... let's see ...," she began, awkwardly laughing."I think what we need to do is bring ... ahh ...."

At least she closed the 30-second speech on a somewhat coherent, if cagey, note. "We need to be more accepting of each other and we need to bring people together. That's what I think we need to do."

This year the pageant incorporated social media by selecting a Facebook-generated question that all five finalists -- ears muted with headphones as the others spoke -- would have to answer: "In the year 2020, a woman will appear on the $10 bill. Which American woman would you like to see on the first printing of the bill and why?"

Civil rights activist Rosa Parks and Sisters of Mercy founder Catherine McAuley each got a nod (earning Nevada and Rhode Island, respectively, a bit of redemption; then again, McAuley was Irish, not American). Miss Texas USA Ylianna Guerra answered by not answering ("We have both a [female] Republican and Democratic candidate running for president and I think we should just wait and see").

The other two picked the same perplexing choice.

Miss Oklahoma USA Olivia Jordan: "Well, I wish that Oprah was an eligible candidate because I would love to see Oprah on a bill."

Miss Maryland USA Mame Adjei: "Honestly, I would like to see Oprah, I think she's a great role model. She's a person that has has transcended so many adversities. She's an example of someone that's been so steadfast in following her dreams, never letting go and always holding herself accountable to reaching her goals. That is someone I hold in high esteem and that I look up to, and I want to be just like that woman because of what she's gone through and what she's surpassed. No matter what you go through, you can be whatever you want, and that to me is inspiring."

There's just two (hundred or so) reasons why that might not work: According to the U.S. Department of the Treasury, "The law prohibits portraits of living persons from appearing on Government Securities."

And besides, Oprah has no idea what a $10 bill even looks like. Ms. Winfrey, that's what you use as toilet paper.

Still, Oklahoma -- who gave a second, more serious suggestion of Harriet Tubman on the $10 bill -- emerged with the Miss USA crown, sash and prize package. The Boston University-educated fitness instructor/trainer from Tulsa, who will represent the U.S. at the Miss Universe pageant, can add this to her resume after appearances in films like Hot Tub Time Machine 2.

Maryland came in as fourth runner-up, not because of her Oprah answer. (Even Trump himself floated the media queen's name for his 2016 ticket: "I think Oprah would be great. I'd love to have Oprah," he was quoted as saying. "I think we'd win easily, actually.")

Maryland surely did herself in with another answer: "I think that it is an awesome thing to open our doors to all countries, all nations and to mend our relations with everyone. We should not be holding on to old grudges. We should be moving forward and accepting each other and loving one another and moving forward so that we can create better relations, better society, better govern -- govern our countries better that way."

That's not the way to get in good with Trump, for Reelz.

Send a "peace" of email:

Spin Cycle is a weekly smirk at pop culture.