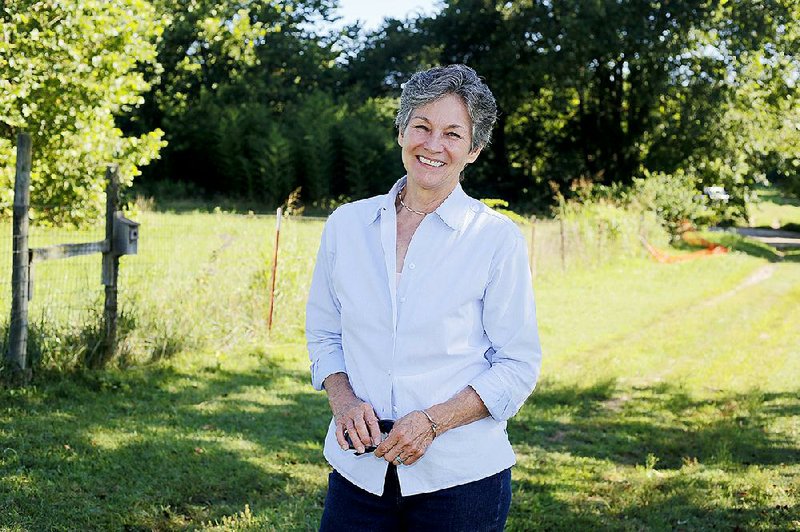 Vickie Kelley, founder of the Natural State Burial Association, stands on the property of Don Austin off Hamestring Creek Road in Fayetteville. The 20 acres will become a natural-burial cemetery.

FAYETTEVILLE -- Life was the topic of discussion inside Vickie Kelley's truck as she pushed a bare foot adorned with magenta toenails on the brake, halting dangerously close to the vehicle in front of her at a stop sign in Fayetteville. 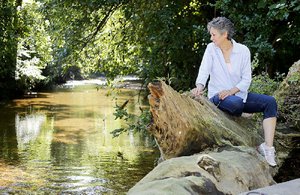 Photo by David Gottschalk
Vickie Kelley, founder of the Natural State Burial Association, sits on a tree trunk washed against a low-water bridge on property in Fayetteville that will become a natural-burial cemetery. 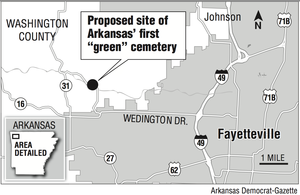 This graphic shows the proposed location for the cemetery.

The truck's windows were rolled down to let in the breeze. A steady drizzle of rain crept in as Kelley's 62 years of memories poured out.

“It’s about choice, going back to nature.”

Alive, Kelley has chosen to be a lot of things: wife, mother, Arkansas transplant, artist, feminist and activist.

Dead, the Mississippi native wants her body placed inside a biodegradable shroud or casket and taken to a "green," or natural, cemetery that doesn't require embalming.

"It's about choice, going back to nature," said Kelley, an Elkins resident.

As the tires spun down a county road, kicking up dust and small rocks, Kelley stopped and pointed: "Wouldn't that make a nice cemetery entrance?"

Tree branches arched over a narrow road, which leads to what may become Arkansas' first natural cemetery in modern times.

There are no statistics on how many natural burials have taken place in the United States, and the number of natural cemeteries is unknown because some have rooted themselves on family farms and the like.

So far, the Green Burial Council, a nonprofit organization that certifies environmentally sustainable mortuary providers, has certified 46 cemeteries nationwide, while the Funeral Consumers Alliance lists 71 other green or hybrid cemeteries.

None of the 100 or so perpetual-care cemeteries -- at which the cemetery is responsible for maintaining the graves or plots -- and the thousands of family and donation-based ones in Arkansas are considered to be natural cemeteries. However, Gracelawn Memorial Park in Van Buren has "green" sections in its conventional cemetery.

A green cemetery request has never been made to the Arkansas Department of Health, an official said.

Under Kelley's vision, bodies buried on the 20-acre property in Fayetteville wouldn't be embalmed, a procedure in which bodily fluids are drained and replaced with chemicals, which typically include a mixture of formaldehyde, methanol and other solvents to temporarily slow decomposition. The remains would instead be placed directly inside a biodegradable shroud or casket without a burial vault or liner.

Although Arkansas law doesn't require a burial vault or liner, most cemeteries do, said Amy Goode, executive secretary with the state Board of Embalmers and Funeral Directors.

Goode added that although the board doesn't receive many inquiries about natural burial, its members are working on a definition of the practice that will be published in the future.

In a typical burial, a burial vault or liner is placed in the ground before burial, and the casket is lowered into it. This prevents the ground from caving in as the casket deteriorates; it doesn't, however, prevent the body from decomposing.

Neither do caskets, said Josh Slocum, executive director of the Funeral Consumer Alliance, a consumer advocacy organization that monitors the funeral industry.

Caskets may keep out air, water and other outside elements for a while, Slocum said, but that's an expensive investment to store a body that will decompose regardless.

In addition to environmental concerns, the cost of a modern funeral is also a factor in the re-emergence of natural burials, Kelley said.

For instance, one Little Rock funeral home charges about $5,000 for an adult's full-service funeral, not including the purchase of a burial plot and grave marker.

A chunk of that goes toward a basic services fee -- common to all funeral homes and regardless of the specific arrangement -- that covers funeral planning, securing necessary permits and copies of the death certificate, preparing the notice, housing the remains and coordinating with a cemetery.

According to the National Funeral Directors Association, the median cost of an adult's funeral with a metal casket in 2012 was $7,045. This price doesn't include cemetery, monument or marker costs, or crematory fees. With a vault, the median cost is $8,343.

A natural cemetery cuts costs through the exclusion of embalming and caskets and because only flat, native-stone grave markers are allowed.

Burial costs for the Natural Burial Association's proposed cemetery have not been determined since it's not an established cemetery yet, Kelley said.

She said right now the organization is helping to educate the public about funeral costs and practices. If the property becomes an established cemetery, it will provide an alternative burial option.

"We're kind of bracing ourselves to get some pushback," said Kelley, who is now the organization's treasurer.

When it comes to caring for the dead, most people tend to think it's best -- and required by law -- to let professionals handle the arrangements.

However, in Arkansas, as in most states, it's legal for family members to care for and bury their own dead.

The Arkansas Cemetery Board regulates only perpetual-care cemeteries, which means all other cemeteries -- including family-owned and those deemed natural -- fall outside of that board's jurisdiction, said Karyn Tierney, deputy commissioner with the Arkansas Securities Department.

This means that Arkansans can conduct a home funeral for a family member and transport the body to a cemetery, provided that they're in compliance with all permits and other health regulations.

Before a cemetery of any kind can be established, however, the Arkansas Department of Health must determine whether there is a potential threat of groundwater pollution, Slocum said.

Decomposing corpses don't contaminate groundwater if the cemetery property is situated away from an aquifer, Slocum and Lisa Carlson wrote in their book, Final Rights: Reclaiming the American Way of Death.

"Humans are not different in death from other animals," they write. "Deer, raccoons and livestock die in the open all the time. None of them are embalmed or placed in caskets or concrete vaults, yet we don't lobby our city councils for mandatory taxidermy for wild animals or livestock."

Embalming human remains is a relatively new practice in America, Slocum said. It grew out of a need to preserve the bodies of Civil War soldiers for burial back home. The railroads added to the urgency by refusing to carry decaying bodies because of the smell.

Natural burial has been practiced for thousands of years. Jewish and Islamic law prohibit embalming and require a biodegradable shroud or casket.

No state requires routine embalming of all bodies, said Slocum, adding that refrigeration or dry ice can take its place in many instances. However, a body that will be shipped by common carrier or outside of Arkansas must be embalmed.

Most funeral directors won't arrange a public viewing of a body without embalming and cosmetic restoration, though, he said.

"A dead body is less of a threat to public health than a live one that is still coughing and breathing," Slocum said.

Kelley said her ideal burial spot is alongside the brook that separates the prospective burial grounds from flood-plain land that may be used for recreational and ritual purposes.

But she isn't optimistic that the health department will approve of burials near there because of the potential for flooding.

If that's the case, Kelley may be buried elsewhere on the property, but she doesn't expect to die anytime soon.

One of the property owner's horses greeted Kelley as she met the owner at a gate, one of a handful of meetings since their introduction this spring.

Wisconsin native Don Austin, clad in holey denim jeans and a straw hat, has agreed to donate the property to the Natural State Burial Association so he can remain among the company of his horses, past and present.

"I do have several horses buried here, and so I don't want the land messed with," said Austin, holding a large rainbow-print umbrella in one hand and a dog leash in the other.

The 66-year-old paused and gazed out at the empty pastureland before adding: "It just seemed like such a nice way to go."