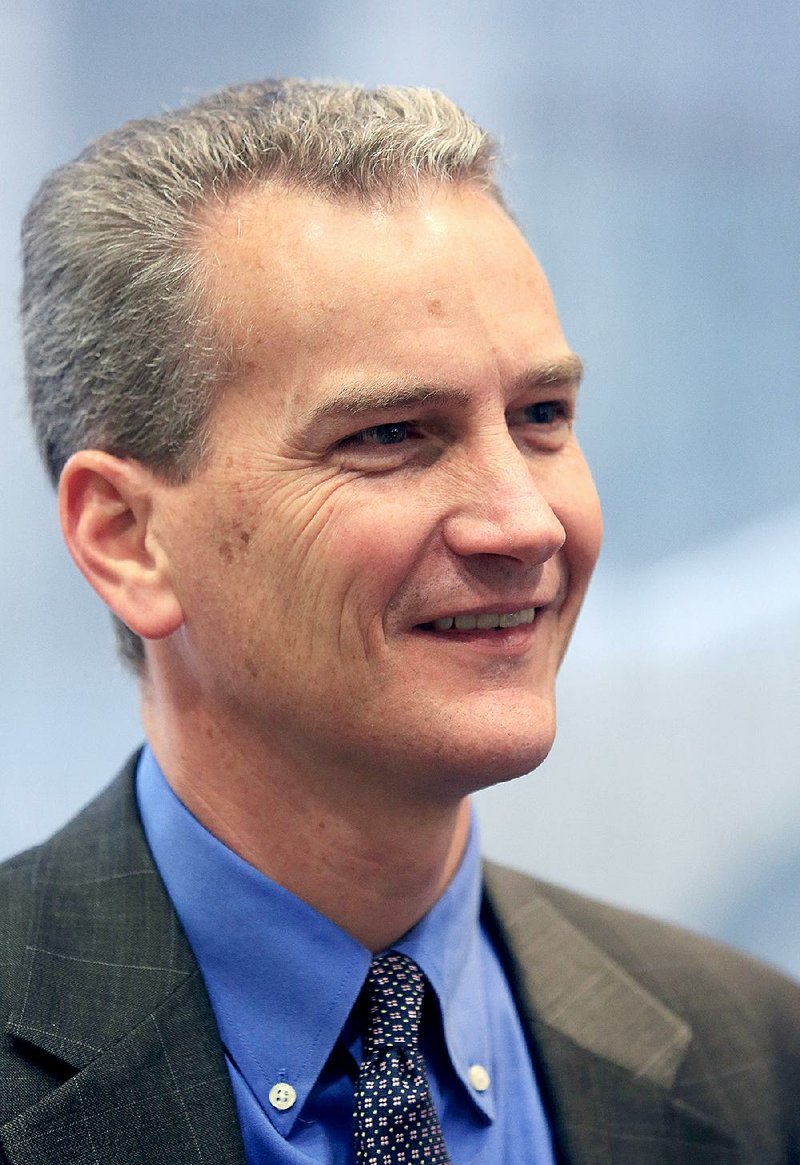 Brett Powell is shown in this file photo.

Colleges and universities statewide are rebuilding or reinvigorating online offerings in preparation for the fall term.

The revisiting of online programs is helping the higher-education institutions to compete in an already crowded field for nontraditional students -- students who don't come directly from high school or who started college but then stopped before graduating.

The Arkansas Department of Higher Education has allowed more than 120 distance education providers -- both in-state and out-of-state institutions that have online offerings -- to operate in the state, officials have said.

"There has been a renewed emphasis on improving the college attainment rate, whether certificates or degrees, of adult Arkansans, and online education is an important component of that effort," said Brett Powell, director of the state's Department of Higher Education.

Many higher education leaders are hopeful the renewed emphasis on online learning will expand course and degree program offerings to students and, subsequently, raise the state's graduation rates, which have consistently ranked in the bottom tier in the nation.

"Most online programs are built around flexible schedules that allow students to complete courses requirements at times that are most convenient for them," Powell said. "This is particularly important for adults with families who must plan around work schedules and family responsibilities."

Some 350,000 Arkansas adults have taken some college courses but have not earned a degree, according to a recent report by the Lumina Foundation. The private foundation, based in Indianapolis, seeks to increase the number of Americans with higher education credentials.

That's the target of the new online-only university, eVersity, managed by the University of Arkansas System. The university, set to open to students in October, is a stand-alone school that will offer one six-week, online course at a time to adults seeking to finish out a degree.

Other universities are shoring up their online offerings, too.

The University of Central Arkansas in Conway is now offering two undergraduate degrees specifically designed for students who have some college education but had stopped: a bachelor of science in professional studies and a general business major.

The 11,698-student university has moved those offerings, along with a bachelor's of science in nursing, 15 master's degrees and one doctoral degree under the UCA Online umbrella. It has offered graduate-level courses and degree programs for years but is now tapping into the undergraduate degree program market, said Christina Madsen, UCA's associate vice president for communications, public relations and marketing.

UCA's student population is still mostly made up of those coming from high schools, said Steve Runge, the university's executive vice president and provost. Students who take and earn online degrees are a different demographic.

"We haven't really tapped into that demographic," Runge said.

Runge pointed to former Gov. Mike Beebe's call to double the number of degree holders in the state by 2025.

The statewide average of students graduating in six years is 40 percent out of the 15,193 students who entered in the fall 2009 semester, the Higher Education Department said. Arkansas' graduate rate is the fifth-lowest in the nation, according to the National Center for Higher Education Management Systems.

Graduation rates are telling for policymakers gauging the state's economic health, officials have said. More graduates can help attract industry to the state.

UCA has its own goal to reach by 2023: moving its current 43 percent six-year graduation rate to 60 percent. The school recorded its highest fall-to-spring retention rate this past academic year, maintaining about 90 percent of its freshmen students, Runge said.

"We're very, very optimistic that we're going to make significant gains in retention," he said, adding that it would lead to higher graduation rates and meeting Beebe's call. "We think we can help."

Michael Judge, UCA's director of online learning, said the university will not sacrifice quality with the online courses.

"The learning outcomes are the same," he said. "There's no difference between the online outcomes and the face-to-face outcomes. It's how you go about it and how you deliver those activities, those assignments, those resources."

The courses are taught by UCA faculty -- mostly full-time professors -- who are responsible for student engagement and success, Judge said. The university has also hired a program coordinator, who will be assigned to online-only students throughout their degree, he said. The program coordinator will help those students with all other university-related problems, including admissions and financial aid.

Arkansas State has had partnerships with two-year colleges across the state to provide distance education for students. That allowed students who took courses at a community college to stay in the same city to complete a bachelor's degree.

Of the current online offerings, ASU's bachelor of general studies degree is targeted for those who have some college credits but have not earned a bachelor's degree. Another undergraduate degree program offered fully online allows students to work with an adviser to create a degree plan for unique career plans, Sivakumaran said.

Online programs at ASU are taught by Jonesboro-based faculty and have additional staff dedicated to online operations for nonacademic, university-related problems.

Officials at the 13,144-student campus recently redesigned its online portal to include tools allowing potential students to decide on areas of study, according to a news release.

The Russellville university has offered online courses since the early 2000s. In 2011, though, then-President Robert Brown tasked administrators and faculty to raise enrollment by 1,000 new students in an online-only format, said Hanna Norton, dean of the university's new College of eTech, which was created July 1.

The 12,002-student university created eTech, online courses separate from classes already offered online. The main difference was how the eTech courses were developed: using faculty, an instructional designer and a multimedia coordinator.

Most universities are using faculty to develop the course curriculum, while the instructional designers help with the delivery of the courses online.

Arkansas Tech officials created the College of eTech -- which currently houses 83 courses and one degree program, the bachelor of professional studies -- to centralize online programs while continuing quality, she said.

Students who come in with some college credits can enroll in an accelerated degree program within the professional studies degree, which has seven different concentrations. The accelerated program allows a student to finish the degree within 18 months.

"We've worked hard to reduce barriers for students," said Norton, who is also an assistant vice president for academic affairs. "My goal is to reduce those barriers even more."

About a quarter of the online offerings this fall are eTech courses, Norton said, adding that she is working to change 242 more online courses for the eTech model.

Norton said she didn't think every class should be offered online.

"What we need to be considering is how can we best meet the needs of our current and our future audiences," she said. "How do we think toward the future?"