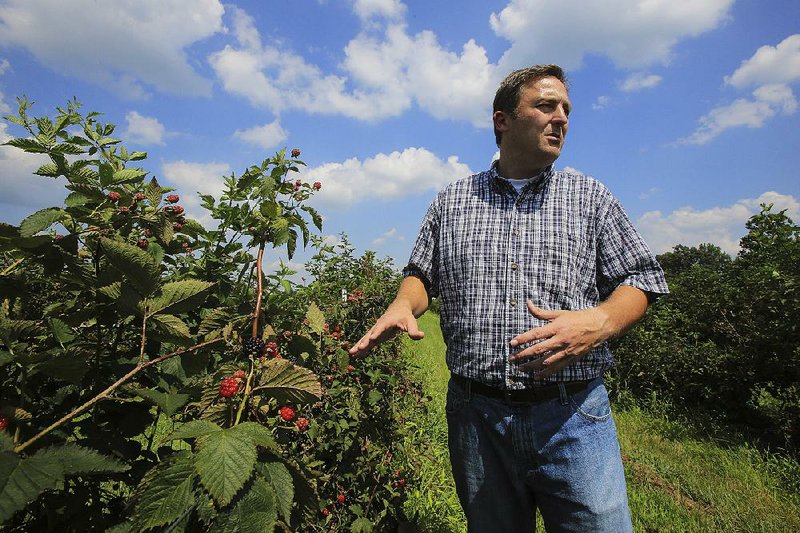 House Speaker Jeremy Gillam says the practical education he gets from growing blackberries on his family farm in Judsonia can be every bit as valuable as what he learned in college.

There are innumerable ways to ruin a farm. 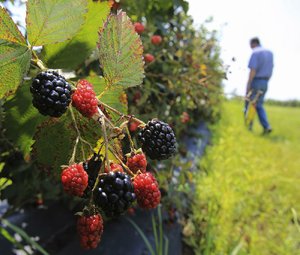 Photo by Staton Breidenthal
House Speaker Jeremy Gillam says about half of his blackberry crop will die on the vine this year because of problems in the nation’s farmworker visa program that are hampering his ability to hire migrant workers to harvest his crop. 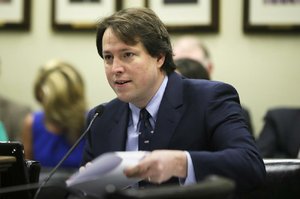 Photo by DANNY JOHNSTON / AP
State Rep. Clarke Tucker, D-Little Rock, says his work as a corporate lawyer has given him broad knowledge that has served him well in the Legislature.

Crop prices might fall. Grain buyers could go bankrupt. It could rain too much and flood, or not enough and dry up.

The government can't control the rain, but it can hold sway over water storage, environmental rules, crop sale regulations -- and more.

And he's not alone. There are now 18 farmers and ranchers in the Arkansas Legislature -- making agriculture the most common profession among lawmakers.

"The end result should be good public policy as it relates to what goes on at the farm," said Stanley Hill, vice president of public policy for the Arkansas Farm Bureau. "[Farmers] tend to be people with good common sense, levelheaded, thinking through processes, [and] familiar with real-life issues. On the farm, you'll have the whole gamut."

As the Capitol's number of farmers has climbed from nine to 18 in the past decade, the number of lawyers -- traditionally the most common legislator profession -- has dropped from 23 to 14.

The number of farmers increased, as the General Assembly became more conservative and Republicans took control.

Although agriculture is the largest industry in Arkansas and it's important to have lawmakers who represent those interests, Eddie Walker, president of the Arkansas Bar Association, said lawyers are also needed in House and Senate.

"Civility when negotiating is part of what we do," he said of lawyers. "We can look at an issue and anticipate what the consequences of changing the law would be."

It was well over 90 degrees on a recent Thursday at Gillam Farms in White County.

Gillam's work is primarily outside. He grows blackberries -- each named for American Indian tribes that once occupied the state -- on hundreds of acres of fields, many referred to by the names of their previous owners.

"Dad really taught us that -- to keep those names alive in the community, let people know the heritage of the area and the folks that made it great," he said.

For Gillam, farming is about hard work, quick thinking and heritage. He says the practical education that he gets on his farm can be just as valuable as the college education he received.

This year, his farm is teaching him about immigration.

Gillam said about half of his blackberry crop will die on the vine because the H-2A farmworker visa program is broken. He faces delays this year in hiring workers from the blackberry-picking region of Mexico.

Most summers, about 120 workers live and work on Gillam Farms. This year, Gillam has been able to find only 36 workers.

"They're professionals," he said. "They're just so used to doing it. It's what they do. They're phenomenal at what they produce. For us, it's what makes all the difference in the world in terms of staying competitive."

Republican presidential contender Donald Trump has said that "when Mexico sends its people" to the United States, "they're not sending the best." He described many illegal aliens as "rapists" and "murderers."

But Gillam, who notes that his workers are legally in the country through a visa program, heaped praise on the people working in his field.

"They're good people. They're hardworking. They're great family men and women. They've got a lot of pride in their culture," he said. "I don't think any one population or demographic has a monopoly on all the good people or bad people."

The federal visa program is foremost on Gillam's mind, but he's also interested in the state water plan because he irrigates his crops, the University of Arkansas Division of Agriculture because it breeds his blackberries and transportation projects because he has to get his crops to market.

The Legislature provided input to the Arkansas Natural Resources Commission, which crafted the water plan. Gillam said he had urged the commission to understand that farmers require a lot of water to irrigate their crops.

Before this year's legislative session, Gillam had said that increasing state funding for the University of Arkansas' Division of Agriculture would be one of his top priorities. Earlier this month, the division received an extra $3 million in state funding, with Gillam's support.

Those are matters that farmers are able to use their years, sometimes decades, of experience on the farm to help resolve.

"They know what's worked, what hasn't worked," Gillam said. "They've lived through bright ideas that have occurred down the line from the federal government, state government."

Rep. Clarke Tucker, D-Little Rock, looks out from his window in the Stephens Building in downtown Little Rock.

His air-conditioned office overlooks the Arkansas River. If he leans over in just the right way, he can see the house where he grew up.

He said his family lived in the area even before Arkansas was a state.

"Almost every case I have, I learn about a different business or industry," he said. "A broad knowledge ... has served me very well in the Legislature."

Other lawyers also say their work has familiarized them with issues they wouldn't have otherwise dealt with.

"I can say there was never an issue that I had not dealt with in some manner from a practical standpoint," said Herschel Cleveland, a former Democratic Arkansas House speaker from Paris. "I was a general-practice lawyer in a small town, and you run into anything -- from child support to economic development."

That results in a breadth of experience that people in many other occupations don't have, he said.

And the nature of lawyers' work makes them sensitive to the needs of people from all walks of life, said Rep. John Walker, D-Little Rock, who practices civil-rights law.

"I have a perspective that seems to be somewhat representative of the plight of the underclass," he said.

"That allows me some insight."

Walker said his work has led him to be especially interested in prison reform, criminal judgments, spending and government accountability.

Tucker said his legal work often means he encounters people at the most vulnerable times of their lives.

"When I was in college, I just got attracted to it, I think, because a lawyer can really make a difference in someone's life," he said. "You know, when someone calls a lawyer, most of the time what they need help with is the most important issue in that person's life."

Tucker said that, so far, he hasn't encountered a law he has wanted to change because of a legal case he's handled.

Neither farming nor practicing law is a part-time job, and allowances have been made in the Legislature to allow people from both occupations to serve as lawmakers.

For years, the General Assembly met in odd-numbered years for a regular session that began in January and lasted three or four months.

The schedule works well for farmers, Gillam said, because they generally plant crops in April and May, and harvest in September and October.

"They set it up that way years ago because we are in an agrarian society, but times have changed, and I guess the expectations of the General Assembly from our constituencies have changed," he said.

And earlier this year, lawmakers voted to move Arkansas' primary elections in 2016 to the same day that elections are held in several other Southern states. Because that primary vote will take place on March 1, lawmakers voted to shift the start of the 2016 fiscal legislative session to April.

"We're moving out of that time frame where you can hope they only need you in the winter months," Gillam said of being a legislator. "That's just not going to be as feasible anymore. People have problems year round, and they need you there."

While the sun, wind and rain won't change to accommodate the General Assembly, judges are frequently a little more willing to work with lawyers who serve in the Legislature.

"The Legislature makes it a little easier, because state courts cannot penalize us during the time that the Legislature is in session," he said.

But Eddie Walker said that kind of understanding is not always the case with a lawyer's clients. Email and cellphones mean clients expect more communication and faster turnarounds from their lawyers, whether or not they're state representatives.

"That's probably one of the reasons why there aren't as many lawyers now," he said.

Term limits may also have made running for the Legislature less appealing to attorneys, he said.

"As a lawyer, you're going to leave your practice to some extent in order to serve, and you kind of need to know you've got the ability to be there long enough to have some meaningful effect on policy," he said. "A lot of times, you can't effectively change policy in one or two terms."

Though their numbers have increased, farmers say the workload in the General Assembly makes it difficult to both farm and legislate. Technology helps them keep an eye on things back home, but it can't replace them being in the field.

"I had that vision, you know, like you see in TV shows, when you're in the situation room with the screens up and everything," Gillam said. "It doesn't work out that way. Agriculture and farming, it's just hands-on."

Outside of farming and practicing law, "retirement" is legislators' most often listed occupation, according to an analysis of legislator biographies.