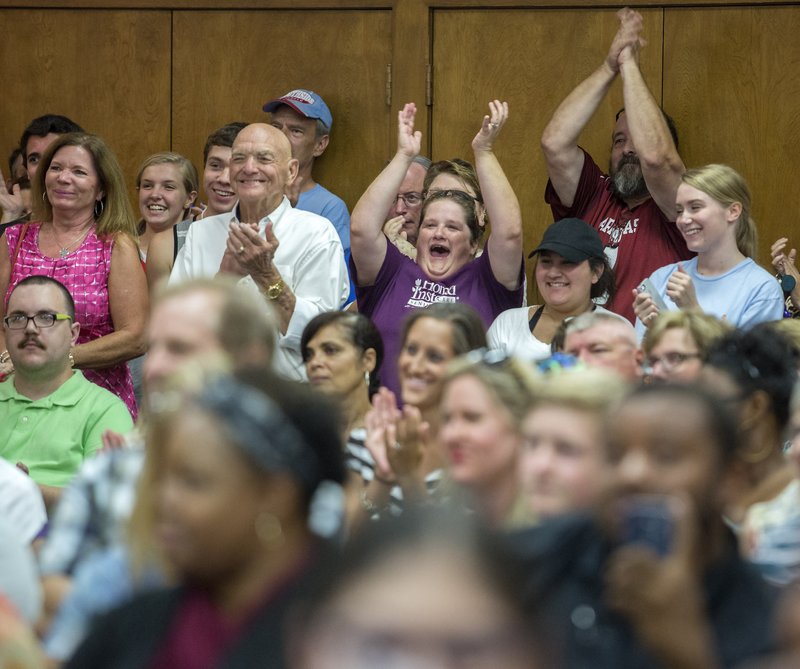 Some in attendance at Monday’s Fort Smith School Board meeting react after public input from Southside High School junior Christian Parker in support of keeping the school’s Rebel mascot and "Dixie" fight song.

FORT SMITH -- The Fort Smith School Board on Monday erased a 52-year tradition when it voted unanimously to do away with the Southside High School mascot and fight song as perceived symbols of racism. 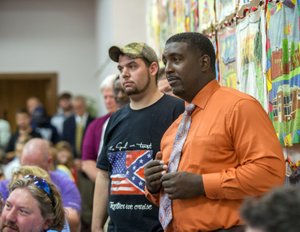 Photo by Jason Ivester
Cory Guadagno (left) and Felix Curry, both of Fort Smith, wait for their turn to provide public input on the subject of removing the mascot and fight song from Southside High School during a Fort Smith School Board meeting Monday.

The seven-member board didn't discuss the issue before voting Monday but heard 90 minutes of comments from the public.

The board's vote was to eliminate the school's fight song, "Dixie," in the 2015-2016 school year and to phase out the Rebel as the school's 52-year-old mascot before the 2016-2017 school year, according to Board President Deanie Mehl.

A standing-room-only crowd of about 200 broke out in applause when the seven board members raised their hands to signal their votes Monday. Most of those who addressed the board during the comment period, including several Southside graduates, spoke in favor of changing the mascot and fight song.

Eddie Walker, president of the Arkansas Bar Association, said three of his children graduated from Southside but that the Rebel and "Dixie" had a lot of negative symbolism for black people.

"It has a lot of negative symbolism for me," said Walker, who is black.

He said the decision to adopt Southside's mascot and fight song was made during the tumultuous period of integration and should never have been made.

A 2009 Southside graduate, Dalton Person, recalled feeling embarrassed running onto the field at Little Rock Central High School, a focal point for school integration in the 1950s, as a football player and hearing the fight song that began with "I wish I was in the land of cotton."

Kelsey Thompson said she supported changing the mascot and fight song. She said she felt embarrassed to hear people from other communities criticize Fort Smith for Southside's Confederate symbols.

"There's no community without unity and this is breaking our community," she said.

Southside junior-to-be Christian Parker said he wanted to keep the mascot and fight song. He said the generation represented on the board sees race differently than his generation.

He said the board should spend the thousands of dollars it will cost to re-brand Southside High School's mascot and fight song on things like books, band equipment and killing the roaches and mice he said infested the school.

Southside Principal Wayne Haver, who opposed the mascot change, estimated last week that it would cost up to $500,000 to change the mascot imagery. School Superintendent Benny Gooden told board members Monday he thought it would cost about $200,000.

He said there were sufficient funds to pay for the changes in one or two district activity funds.

Lea Lane, who said she moved to Fort Smith four years ago, suggested that Southside adopt the Marshals as a new mascot. Fort Smith was chosen in 2007 as the home of the U.S. Marshals Service national museum and is raising the money for its construction.

The board voted as a committee of the whole last month to recommend changing the mascot and fight song, and Monday's vote made the recommendation official.

A portion of the minutes of the June 23 committee meeting stated, "Giving great consideration to the continuing impact of perceived symbols of racism on the community, state and nation, the Fort Smith Public School Board committee members discussed changing the Southside High School mascot and discontinuing the "Dixie" fight song. Symbols associated with Southside High School have been a topic of discussion with the FSPS Board of Education since a resolution to study the use of these symbols passed in 1989."

The committee vote came less than a week after the shootings at Emanuel African Methodist Episcopal Church in Charleston, S.C., in which nine black people were killed during a Bible study session. A white man, Dylann Roof, has been charged in their deaths.

The attacks resulted in a nationwide outcry to do away with Confederate symbols after photographs surfaced of Roof brandishing a Confederate flag.

Fort Smith attorney and 1981 Southside graduate Joey McCutchen sued the School Board in Sebastian County Circuit Court last week charging that the committee members violated the Arkansas Freedom of Information Act because the public and media received no notice of the June 23 committee of the whole meeting.

His lawsuit, which names as defendants the six who voted at that meeting, the School Board and the school district, says the only notice the district sent out was for the called board meeting for that day to discuss in closed session the annual evaluation of Gooden.

Chris Cloud called on the board Monday to put off the vote and allow the school's principal, teachers, staff, students and residents to have input on whether to change the mascot and fight song.

Wyman "Rick" Wade, a member of the School Board, told the Arkansas Democrat-Gazette following the meeting last month that the board's vote was long overdue. He said the mascot and fight song issue has been discussed for more than two decades.

Mehl said last week the school's mascot and fight song have been brought up to her as an issue for the entire 10 years she has been on the board. She said the mascot was a symbol of segregation, oppression and prejudice.

But during a rally at the school's stadium Friday that was organized by McCutchen, many of the 150 who showed up said they never viewed the mascot and fight song as racist but as symbols of school spirit, tradition, history and pride. Many who spoke during the hour-long rally talked about the good memories and experiences they had at Southside High School.