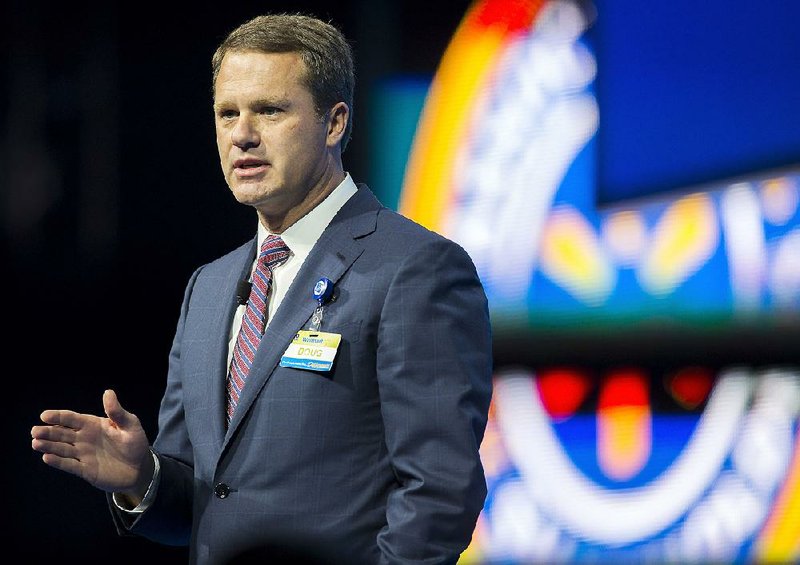 Northwest Arkansas recruiting firm Cameron Smith & Associates is preparing its employees for "a surge of phone calls, emails and resumes" related to layoffs at the Wal-Mart Stores Inc. home office in Bentonville.

Wal-Mart management, including CEO Doug McMillon, has publicly discussed being too bureaucratic at the headquarters level, and the company added $1 billion for employee wages and training initiatives to its budget this year with more raises coming in February. Cameron Smith & Associates employees, in an internal memo dated Monday, were given a plan of action in the event there are layoffs at Wal-Mart's Bentonville hub.

"Please remember, these people are our neighbors and friends. You have a skill that will be very much in need when this goes down. You are experts in the job market and you know what it takes to get hired. This is a time for us to step up and do what we can to help," according to the memo obtained by the Arkansas Democrat-Gazette.

Wal-Mart spokesman Deisha Barnett said the company is evaluating "our management structure as every high-performing company would. Speculating any further would be premature."

As many as 1,000 employees could be laid off at the home office, according to Cameron Smith of Cameron Smith & Associates, which specializes in working with Wal-Mart vendors and suppliers. Smith said he sent the memo to his employees on the basis of conversations with people "inside Wal-Mart" and as a means of ensuring his employees are better prepared for assisting laid-off workers than they were in 2009 when as many as 800 Wal-Mart headquarters employees were let go.

Wal-Mart employs more than 20,000 at its Bentonville headquarters.

"The last time Walmart had a large layoff (800 plus), we were unprepared and overwhelmed with phone calls, emails, resumes" and walk-ins, Smith said in an email. "It also affected our business as it flooded the market with candidates. That said, we rallied as a team and put on job search workshops, free coaching and counseled hundreds. I have never been more proud of my team."

Cutting through red tape and trimming bureaucracy has been among the goals of McMillon, who took over as CEO in February 2014. Wal-Mart employs more than 2 million worldwide and has more than 1.4 million employees in the U.S.

McMillon mentioned the size of the company's headquarters as a possible detriment to quicker action at the store level and told retail analysts during a June question-and-answer session that employees should remember "there are no cash registers in the office." During a store visit last year, McMillon said he encountered an electronics department manager who spent five hours on the phone with the home office to get assistance with a problem.

"We want people to make decisions and move with speed and not have the organization run in a way that causes it to slow down," McMillon said.

He again referred to the "dangers of a big company" during a June 11 retail conference in Springdale.

"As we've grown and time has gone on, we've created pockets of our business, situations where people don't want to share bad news. Lots of PowerPoints get built, lots of pre-meetings are held to socialize things so people aren't surprised during a meeting," McMillon said. "That is bureaucracy. That slows us down."

Periodically increasing office staff and then paring down the workforce is not unusual for a company the size of Wal-Mart. University of Arkansas economist Kathy Deck said these types of decisions are cyclical, and although the number may be large, its effect on the region's economy is likely to be marginal.

Northwest Arkansas, which is also home to nearly 1,500 offices that support suppliers to Wal-Mart, is among the fastest-growing regions in the U.S. Preliminary unemployment for the region in May was 4.3 percent with a labor force of 249,504, up nearly 5 percent from a year ago.

"There is a natural tendency for organizations to grow, and grow in a way that isn't as strategic as they'd like," Deck said.

"I do think any organization this size is going to have realignment and do it relatively frequently. For folks who do lose their jobs, it's obviously life-altering. We've been hearing kind of rumblings about this for a while, and I think that when you have a company like Wal-Mart and look at the overall Northwest Arkansas economy, short of something catastrophic -- like 25 percent of employees or something -- our economy is in a position to handle the normal churn, even if it's sometimes a big number."

Cuts have typically come in January, the end of the retailer's fiscal year.

About 300 workers were laid off in February 2010 at the home office.

The 800 layoffs in 2009, about 5.7 percent of headquarters jobs at the time, came in merchandising, real estate, marketing, support for U.S. stores and some corporate functions.

A center for laid-off workers to learn about severance and job placement was set up across from the Wal-Mart home office in 2009. Smith expects a similar service to be offered by Wal-Mart, telling his employees that outplacement company Challenger, Gray & Christmas "will have people on the ground the day the pink slips are handed out to help with the transition."

Even with Wal-Mart offering severance help, Smith said his office experienced an overwhelming number of calls, emails and visits.

He doesn't want them caught off guard the next time Wal-Mart makes major workforce cuts.

"We are much more prepared this time," Smith said.