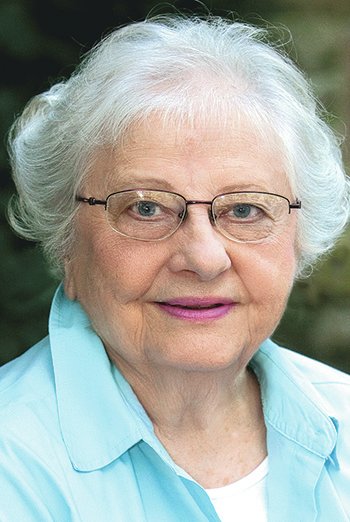 An 83-year-old Eureka Springs City Council member said she was "overwhelmed" at the attention she was getting Thursday after appearing in a segment the previous night on The Daily Show with Jon Stewart.

Joyce Zeller said she had no idea she would be featured so prominently in the five-minute segment on the Comedy Central television show. Several people were interviewed, but only two were used on the show.

"I'm getting emails from all over the United States," said Zeller, a retired perfumer and aromatherapist who is now a novelist. "It's amazing how much positive comment there is."

In the television segment and at the council table, Zeller supported a Eureka Springs ordinance that provides anti-bias protection to gay and transgender people. It's the broadest ordinance of its kind in Arkansas.

Speaking against the ordinance was Randall Christy, pastor of Union Valley Baptist Church in Ada, Okla., and president of The Great Passion Play near Eureka Springs.

Jordan Klepper, a Daily Show comedian and "correspondent," went to Eureka Springs on June 24 to do the interviews. They were conducted separately, with Christy being interviewed first so Zeller would have a chance to respond to his comments.

Zeller said she decided to be as "deadpan" serious as she could -- like "you're the funny person, and I'm your mother."

"This law deliberately discriminates against the church," Christy told Klepper.

Eureka Springs is open to everyone, she said.

"If you're a 7-foot-tall man and you want to parade in town wearing a purple dress, that's fine," Zeller continued.

When Zeller told Klepper of the efforts of conservative religious people to fight the anti-bias law, he said, "Maybe that's because they have to contend with the nightmarish hellscape sin palace thunderdome of gay that is Eureka Springs."

At that point, the video shows Klepper walking down Spring Street and coming out of a shop with a large, rainbow-colored lollipop.

"You know the old adage of hanging out your shingle," Christy said.

The camera pans back to show the interview is being conducted in the shadow of the 67-foot-tall Christ of the Ozarks statue at The Great Passion Play.

"Yeah, I always feel like it's just looming over you," said Klepper.

Christy said Thursday that he thought the segment was "very funny actually."

"They edited in pauses to make it look like I had no answers -- a little dirty pool -- but still we were rolling with laughter at my house," Christy said. "This is not my first rodeo, and I fully expected the ridicule -- no problem. I have a sense of humor, too, and welcomed the opportunity to expose millions to Eureka Springs and the Great Passion Play/Christ of the Ozarks."

Christy said Zeller had misrepresented the facts. He said the only parts of a church that are exempt from the anti-bias law are the sanctuary and chapel. That "leaves vulnerable" other church facilities and "would require us to open them to use by other faiths and religions," he said.

Christy said he is calling on the City Council in Eureka Springs and every other town that has passed a similar law to amend its ordinances to include exemptions for "churches, religious organizations and wedding-related service providers."

Eureka Springs Mayor Robert "Butch" Berry said he was happy with the way the city was portrayed on the show.

"I think Eureka came out looking pretty much like we are open-minded and open to everybody," Berry said. "Nothing has changed toward our welcoming attitude toward everyone."

The mayor said the segment was worth hundreds of thousands of dollars in positive advertising. Mike Maloney, executive director of the Eureka Springs City Advertising and Promotion Commission, agreed.

A state law went into effect July 22 that appears to conflict with Eureka Springs' anti-bias ordinance, which has been on the books since Feb. 10. Berry said the city will continue to enforce its ordinance if there are any violations reported. On May 12, Eureka Springs voters overwhelming endorsed the city's anti-bias law.