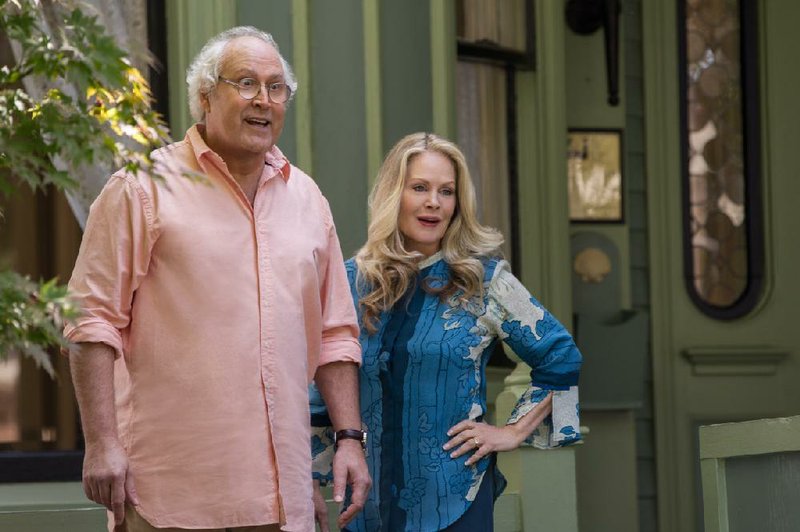 Chevy Chase and Beverly D’Angelo — stars of 1983’s "National Lampoon’s Vacation" — reprise their roles as Clark and Ellen Griswold in the 2015 sequel "Vacation."

Should you actually have the time and money to afford a ticket to Vacation, I would recommend leaving immediately after the opening credits. The lion's share of the laughs occur then.

As the names roll by, a long montage of bizarre family vacation photos unfolds, reminding viewers that some memories aren't Kodak moments. Once Lindsey Buckingham's music stops playing in the background it's time to go home. If you're lucky, this "greatest hits from Awkward Family Photos" might have made its way to YouTube for further enjoyment.

Rating: R, for crude and sexual content and language throughout, and brief graphic nudity

It's tempting to pity those stuck with the rest of the film.

Vacation follows the next generation of the Griswold clan from 1983's National Lampoon's Vacation, but it's easy to wonder how a clan this dim has continued to spawn.

Family vacations are often more frustrating and humiliating than rejuvenating, so everyone has been a Griswold. The family as conceived by original screenwriter John Hughes and director Harold Ramis (neither of whom is available or even alive anymore) may have had more enthusiasm than smarts, but they were easy to identify with. Their misfortunes, while outrageous, were grounded just enough in reality to make the hapless group likable.

Not so Rusty Griswold (Ed Helms) and his brood.

He's a friendly but spineless pilot for an Illinois carrier that can't even get respect at Midway. His wife, Debbie (Christina Applegate), is bored with him, and their sadistic younger son Kevin (Steele Stebbins) torments his sensitive older brother James (Skyler Gisondo).

If you think the clueless Russ and his dysfunctional family are irritating in the Chicago neighborhood, wait till Rusty gets the idea to take himself and the other Griswolds halfway across the country to experience Walley World (neither film felt like pursuing the rights to the Mouse House) in California.

The script and directing are credited to Jonathan M. Goldstein and John Francis Daley, the team who wrote Horrible Bosses, but it seems as if the mean-spirited Kevin is at the helm. Whoever actually supervised this abomination lives under the impression that watching unlikable people wallowing through cesspools (in Hot Springs, no less) is comedy gold.

There are also a series of gags involving pedophilia, pubic hair and other things that might have been funny in the hands of the Farrelly Brothers in their prime.

Despite Helms and Applegate's proven track records with comedy, the jokes consistently fall flat. The greatest wit that Goldstein and Daley can master is misspelling "Asperger's." (You don't need me to repeat the way they spelled it.)

On the way to the theme park, the Griswolds deal with a rented European jalopy with a stereotypical Asian voice for the GPS, a disastrous rafting trip at the Grand Canyon, unfair depictions of Arkansans, Rusty's sister Audrey (Leslie Mann, waiting for her husband Judd Apatow to put her skills to better use) and her Paleolithic but wealthy husband Stone (Chris Hemsworth).

Hemsworth almost gets a chuckle poking fun at the alpha male persona he has developed playing Thor. He's willing to embarrass himself a little, but neither Goldstein nor Daley has found anything worthwhile for him to do other than sport what appears to be a gargantuan manhood.

Original Griswold parents Chevy Chase and Beverly D'Angelo make token appearances toward the end, but Goldstein and Daley are too lazy to give them anything worthwhile to do.