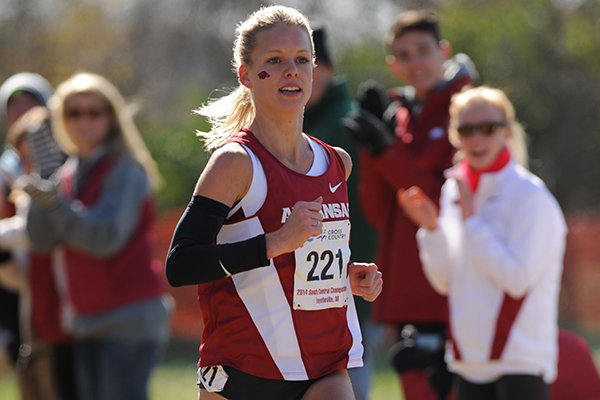 FAYETTEVILLE -- Arkansas has qualified so many track and field athletes for the Outdoor Championships in Eugene, Ore., the NCAA will be sending a charter to Northwest Arkansas to pick up the Razorbacks' contingent next Sunday.

It's cheaper and easier for the NCAA to put athletes, coaches and trainers on a chartered flight with representatives from other schools than try to buy enough commercial plane tickets.

Lance Harter, Arkansas' women's coach, said the West prelims couldn't have gone much better in a format where the top 12 in each event advance to nationals.

"We surpassed any expectations we had as a staff prior to the meet," Harter said. "We were thinking, 'Can we get all these people through?' Then we got even more.

"We really came through it unscathed. We're continuing to march right on cue."

Razorbacks junior Alex Gochenour and freshman Taliyah Brooks, competing at nationals in the heptathlon, advanced in the 100-meter hurdles at Austin.

"They ran the hurdles basically as a training effort for the heptathlon and they both qualified," Harter said. "That was a nice bonus."

Arkansas' men's team will go into the NCAA Championships with the top mark in four events with senior Kemoy Campbell in the 5,000 meters; senior Stanley Kebenei in the 3,000-meter steeplechase; sophomore Omar McLeod n the 110-meter hurdles; and the 400-meter relay team of McLeod, juniors Jarrion Lawson and Marqueze Washington and freshman Kenzo Cotton.

In addition to winning the 110 hurdles Saturday night, McLeod ran legs on the 400-meter and 1,600-meter relay teams that advanced.

Lawson ran on both relays and also advanced in the long jump and the 100 meters, which is a new event for him this outdoor season.

"Jarrion is progressing at a quick pace in the technical aspects of the 100," Buckman said. "He's just had a huge breakthrough in the sprints."

Campbell dropped out of the 10,000 meters Thursday night after running 20 of 26 laps, then came back to advance in the 5,000 Saturday night.

"Kemoy had every intention of qualifying in the 10,000, but he has a history of Achilles tendon issues and he was in a pack and got kind of banged around, and he felt like he was going to injure himself if he kept going, so he backed off," Bucknam said. "He was able to qualify in the 5,000, but he limped off the track."

Kebenei had planned to run the 5,000 meters, but was scratched because of a sore calf.

"Kemoy and Stanley are nursing some injuries, but they're great competitors," Bucknam said. "Now they need to rest and recover and mend a little bit."

The big downer for Arkansas at the West prelims was Andrew Irwin -- a two-time NCAA champion and five-time All-American from Mount Ida -- failing to advance in the pole vault.

"I feel bad for Andrew," Bucknam said. "It's not the way you want to see him go out.

"Andrew's been such a great guy for us over the last four years. I'd put him back in there any day of the week if I could. He's been a great competitor and champion for us."