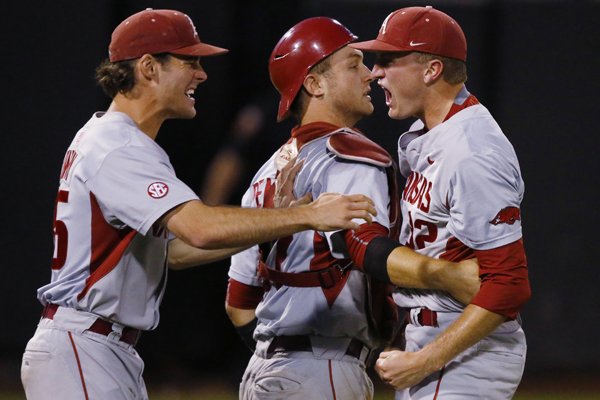 STILLWATER, Okla. -- Arkansas added another page to its clutch postseason story on Sunday night, knocking off St. John's 4-3 with a run in the ninth inning to win the Stillwater Regional at Allie P. Reynolds Stadium on the Oklahoma State campus.

Joe Serrano's high chopper to shortstop brought home Brett McAfee with the go-ahead run after the Razorbacks squandered a 3-0 lead behind a strong start from senior Jackson Lowery.

Arkansas (38-22), playing in front of a pro-Razorbacks crowd, advanced to the super regional round, its first since 2012. The Hogs have a strong chance to host the super regional series against No. 8 national seed Missouri State, which advanced with a 3-2 victory over Iowa.

Missouri State has earned the host's role, but its home ballpark, Hammons Field, is also home to the Class AA Springfield, and the Cardinals have home games scheduled for next week.

The Razorbacks won their 10th regional championship and qualified for their sixth NCAA Super Regional since the format began in 1999.

"Just real proud of the team for hanging in there, trying to recycle pitchers and finding a way to win this game so we didn't have to go to [today]," Arkansas Coach Dave Van Horn said of sweeping through the regional in three games.

St. John's (41-16) eliminated Oklahoma State 2-1 earlier in the day to advance to the regional final but bowed out after playing its third one-run game.

Arkansas closer Zach Jackson struck out the side in the bottom of the ninth inning to earn his second save of the regional and his eighth of the season.

Jackson, from Berryhill, Okla., pumped his fists, screamed and slammed his glove to the ground after striking out Jarred Mederos to end the game.

"They had the hammer at the end," Blankmeyer said of Jackson, who he'll be coaching with the USA Collegiate National team this summer. "That kid can throw the baseball very well. He's got a power arm."

Tyler Spoon's sixth-inning home run over the 40-foot wall in left field was among the Razorbacks' 11 hits, while Arkansas pitching limited the Red Storm to five hits.

Serrano, named the tournament MVP, went 2 for 4 with 2 RBI and added a overhead running catch near the wall on a shot by Anthony Brocato on a hit-and-run play in the fifth inning. Serrano is the only Arkansas player who appeared in the Razorbacks' last super regional and College World Series team in 2012.

"We're not satisfied with just this here," Serrano said. "Yeah, it was a really good win for our program and our team tonight, but our goals are set much higher than winning a regional."

James Teague (6-4) won in relief for the second consecutive night, recording five outs in the seventh and eighth innings, getting a double play to end the eighth inning.

Lowery, pitching on one day's rest after throwing 26 pitches to pick up the victory Friday, did not allow a base runner through three innings and dueled with St. John's left-hander Alex Katz over four scoreless innings before the Razorbacks went ahead.

McAfee opened the fifth with a single to center and moved to second when Michael Bernal singled to left to extend his hitting streak to 13 games. Clark Eagan, up to bunt, fell behind with two strikes but stayed with the bunt and got both runners over for Tucker Pennell, whose fly ball to deep center brought home McAfee. Serrano followed with a shot to the hole at shortstop and the Razorbacks led 2-0.

Arkansas extended its lead to 3-0 moments after reliever Shawn Heide entered the game in the sixth as Spoon hit a 2-1 pitch over the left-field wall and into the Oklahoma State softball complex.

"He threw a 2-0 change-up, a good pitch, and then a fastball and I just saw it real well," Spoon said of the home run, the only one for the Razorbacks at the regional.

Eagan nearly had a second Arkansas home run in the seventh inning, but Brocato jumped with his glove over the wall to make the catch.

Lowery got out of trouble in the fourth after he walked Michael Donadio and clean-up hitter Zach Lauricella followed with a ringing double down the left-field line. Matt Harris grounded out to second baseman Rick Nomura to end the threat.

Lowery received a rousing ovation from Arkansas fans in attendance after being replaced by Josh Alberius following a lead-off walk to Alex Caruso in the sixth. Arkansas contributed to St. John's two-run sixth after a stolen base. Bernal fielded a routine ground ball at shortstop from Robert Wayman but threw it into the Hogs' dugout, allowing Caruso to score. Donadio's RBI single cut St. John's deficit to 3-2.

The Red Storm forged a tie in the seventh as Jarred Mederos led off with a single, stole second and came home on Robbie Knightes' one-out single to left field.

Print Headline: Rising up in Stillwater/Hogs in line to host super regional after suriving Red Storm