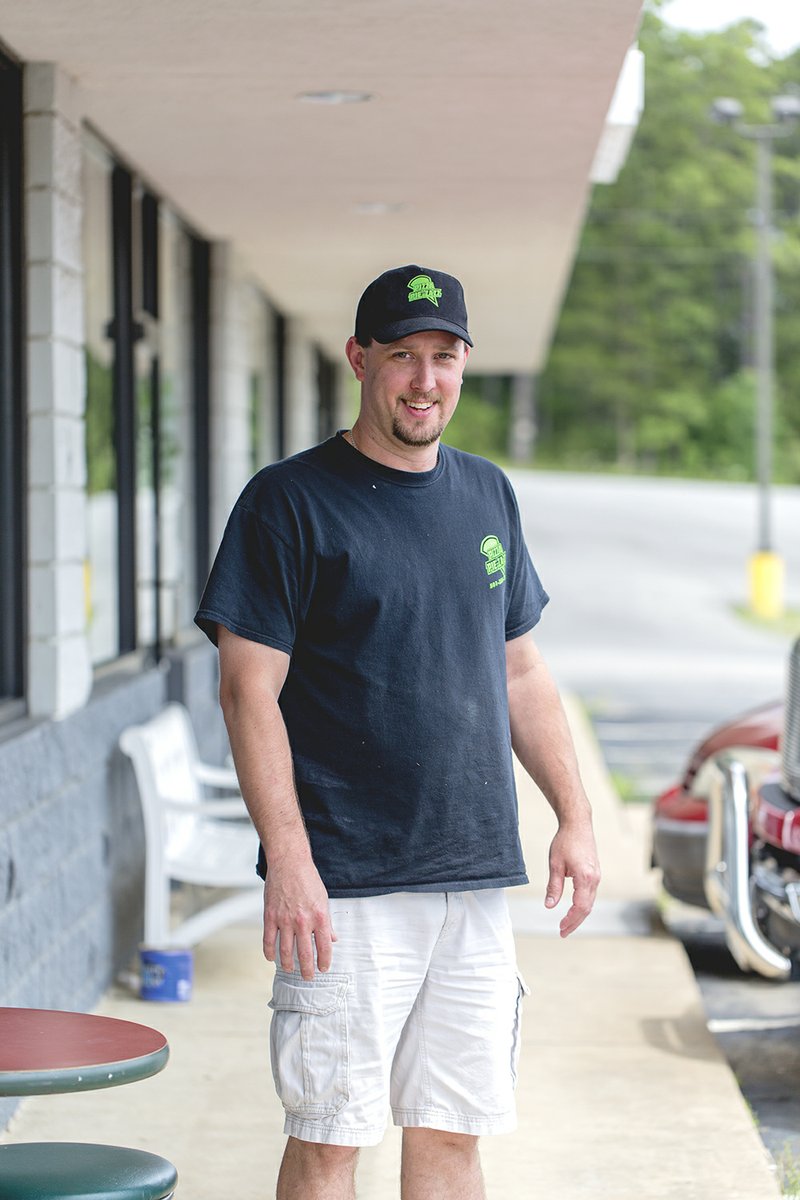 Pangburn Mayor Todd Slayton said he has always had more than one job and that he was raised that way on his family’s Black Angus farm. His career in politics started with a complaint he made about the city’s trash service that led him to a seat on the Pangburn City Council.

HEBER SPRINGS — Todd Slayton said his mother, Shalah Slayton, likes to point out that he wears a lot of hats, both figuratively and literally. The Pangburn mayor owns Pizza Pie-Zazz in Heber Springs, is a part-time police officer in Pangburn and addresses citizens’ needs on a daily basis — even if that means stepping away from making a pizza to call a resident who he knows is going through a rough time.

“On the dash of my truck is a police hat and a Razorback hat, and then I have this one [that says Pizza Pie-Zazz] when I’m here,” he said during a break at the pizza parlor. “If I go home tonight — I get home about 10:30 or 11 — and I decided to get in the police car, I’ve got my shirt and hat and get in my police car and put my hat on the dash. In the morning, I’ll got to [the Pangburn] City Hall and put my Razorback hat on, and then from City Hall, I’ll come here and put this hat on.”

Slayton said he never thinks twice about how busy he is on a day-to-day basis. His parents raised him to work hard, and he has kept that attitude throughout his adult life.

Slayton grew up in Ida, a community north of Heber Springs, and graduated from Concord High School in 1995. He moved to Pangburn about 11 years ago after meeting his wife, Angie.

“I’ve always had more than one job,” he said. “My parents just raised us to work. We had a Black Angus farm, they were teachers, and then in the summer, we would run three funnel-cake trailers. … It’s in my blood to stay busy.”

While he did not set out to get into politics at first, it wasn’t long after Slayton moved to Pangburn that he was contacting City Hall with a concern.

“It actually started out with a complaint about the trash,” he said. “I called all my aldermen, griping about the trash, and they told me there was a vacancy on the council and that I should try to get it. I got it, and the first thing I wanted to do was find a cheaper trash service.”

Slayton said he got involved pretty quickly on the council and started thinking about putting in a bid for a state-representative seat. He was on the council for six years when the mayor’s seat became vacant, and he decided to stay in city politics for a little longer.

“I thought maybe I could help out a few things,” he said.

In his first few months as mayor, Slayton worked with the recorder-clerk, Shirley Ramsey, to get $30,000 in grants for an addition to the fire station. The city also purchased newer firetrucks than what the City of Pangburn Volunteer Fire Department previously had.

“What I did first was, I started a top-10 list,” he said. “I had all the council members rank 10 things that the city needed to improve on. The first three were the Fire Department, the Police Department and drugs. I feel like we’ve really started attacking those.”

The fourth issue on the list was the city park, and Slayton said this year, the city has built new bathrooms for the park and has plans to start a new walking path.

When it comes to the Pangburn Police Department, Slayton has taken a personal role in making sure there are enough officers on patrol.

In December, the Pangburn police chief left to pursue another job. Before Slayton had a chance to replace him, the sergeant left, leaving the two-officer police department unmanned.

“I was pretty much down to zero city officers,” he said. “White County and Arkansas State Police stepped in to help patrol us through the holidays. They did a really great job, and we’re appreciative of their efforts.”

That temporary fix wouldn’t be sufficient, and Slayton said he did not want to waste time. At the beginning of the year, he reached out to Tim Sanford, who was the police chief in Bald Knob. This happened to coincide with the Bald Knob mayor and city council deciding to end their relationship with Sanford and find a new police chief, and Sanford decided to take Slayton up on his offer.

“It’s been a really great find,” Slayton said. “We both had to pray a lot to find someone else. We’re only a two-officer town. They split the time, and they’re on call 24/7. While we were looking, the part-time auxiliary class became open at Kensett, so I decided to check into it so I could help out Chief Sanford and whoever we hired.”

Slayton took the five-week class to become an officer, paying for it out of his own pocket. Toward the end of that five weeks, the city was able to hire a sergeant.

“I basically just fill in or help them,” Slayton said of his role in the Police Department. “I do patrol. I do patrol the streets quite regularly. Since the hiring of these two, I think our crime has gone down by about 75 percent. There could be some unreported stuff, but it’s a lot better.”

During the day, Slayton works at Pizza Pie-Zazz, which he and his wife purchased 14 months ago. The previous owner wanted to go back to school, and the Slaytons decided it would be a great investment. Both Todd and Angie have restaurant experience, and they jumped right in to make the restaurant their own by moving to a different location and changing a few things.

“It took me 49 days, 12 hours a day and seven days a week to get this space ready,” he said about the restaurant. “We built these walls. We jack-hammered the floor for the bathroom. I’m proud of it. We were voted Reader’s Choice Award Best Pizza in Cleburne County [for the local paper] in our first year open.”

Pizza Pie-Zazz is a family effort, Slayton said. While there are employees who are not blood-related, there are a lot of family members who help make things run smoothly.

“My mom helps us. Our daughter works here. Our son wears his Pizza Pie-Zazz shirt and runs around. Our niece is helping out,” he said. “Sandy Skelton — we go to church with her — decorated everything. Ken Walgrehn was our electrician, and we go to church with him, too. Everybody helped us. We’ve been truly blessed in every aspect.”

With the pizza parlor, mayoral duties and police patrol, Slayton doesn’t have much free time. He doesn’t seem to mind, though, and he said if he can grab a few minutes to go fishing every once in a while, he’s happy.