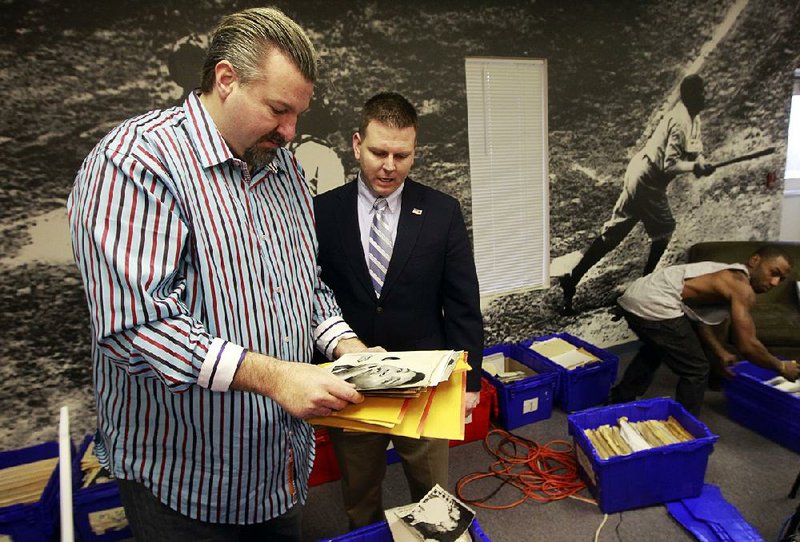 In this file photo, John Rogers, left, examines some of the over $2 million dollars of assets returned to his company Rogers Photo Archive, by Secret Service Task Force Officer Brandon Bennett, center, after 2 former employees stole the historic photos and sold them online.

The lawsuit, filed in Pulaski County Circuit Court by affiliates of the New York media company, asks for the return of archival materials that were supposed to have been digitized by owners John and Angelica Rogers.

Seven newspapers, including the El Paso Times, entered into agreements with Rogers Photo Archives to have photographs and negatives scanned into digital archives created by the North Little Rock company, according to the lawsuit.

The El Paso Times delivered archival material to Rogers Photo Archives on Jan. 17, 2014, and says the company has "failed and refused" to create the digital library, deliver digitized images and "develop, market and maintain" a website for the archived materials, the lawsuit states. The newspaper terminated its agreement with the archival company on May 15 in a letter and requested a return of the materials, court documents state.

The other newspapers are also seeking to recover their archival materials after terminating agreements with the business, the lawsuit states.

Thirteen of the newspapers involved did not have agreements with Rogers Photo Archives, but the lawsuit says the company "took possession of those newspapers' archives."

At least 13 lawsuits have been filed against John Rogers since the FBI searched his home last year, the Arkansas Democrat-Gazette previously reported. Those claims in lawsuits total more than $70 million for the archivist. The lawsuits range from claims that John Rogers failed to pay for archival material purchases to defaulting on loans.