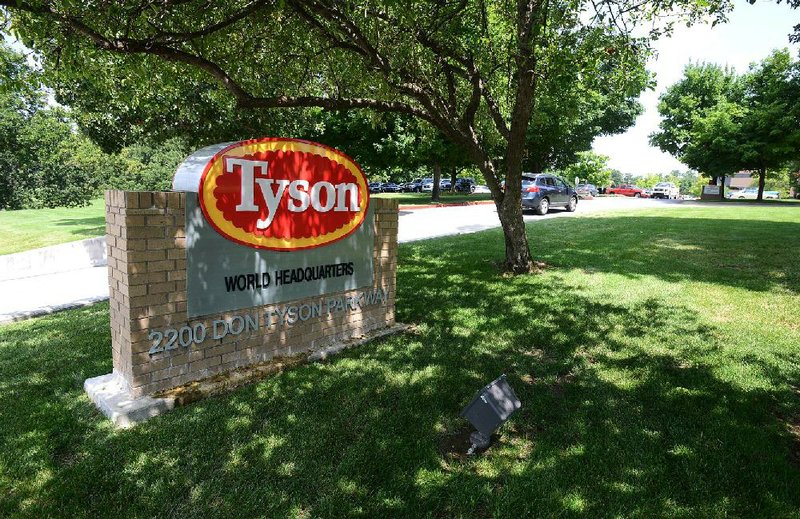 Tyson Foods Inc. has agreed to sell its Heinold Hog Markets division, clearing the way for its $7.8 billion acquisition of Hillshire Brands Co.

WASHINGTON — The Supreme Court agreed Monday to weigh new limits on the ability of workers to band together to dispute pay and workplace issues.

The justices said they will review a $5.8 million class-action judgment against Tyson Foods Inc. over the pay for more than 3,000 workers at its Storm Lake, Iowa, pork processing plant.

The case could allow the high court to elaborate on its 2011 decision blocking a massive sex-discrimination case against Wal-Mart Stores Inc. that would have included up to 1.6 million female workers.

Springdale-based Tyson said it should not have been forced to defend a class-action lawsuit that claims it failed to pay thousands of "knife-wielding" employees and others for time spent putting on and taking off protective work clothes and equipment.

A federal appeals court in St. Louis ruled 2-1 for the employees, who worked on the slaughter or "kill" floor and on the processing or "fabrication" floor.

Tyson argues that lower courts should not have allowed statistics to determine damages for the entire class based on average times observed in a sample of workers from the class. The company calls that a "trial-by-formula" that the high court rejected in the Wal-Mart case.

The company also says the lower courts improperly allowed the class to include hundreds of members who were not injured and would receive no damages in an individual lawsuit.

Lawyers for the plaintiffs say courts have used "representative proof" to allow class actions to go forward for nearly 70 years.

Tyson has faced similar litigation around the country. In 2010, it settled a decade-long dispute with the U.S. Department of Labor by agreeing to pay workers at some poultry plants for time they spent putting on and taking off protective clothing.

The case, Tyson Foods v. Bouaphakeo, 14-1146, will be argued when the court's new term begins in the fall.