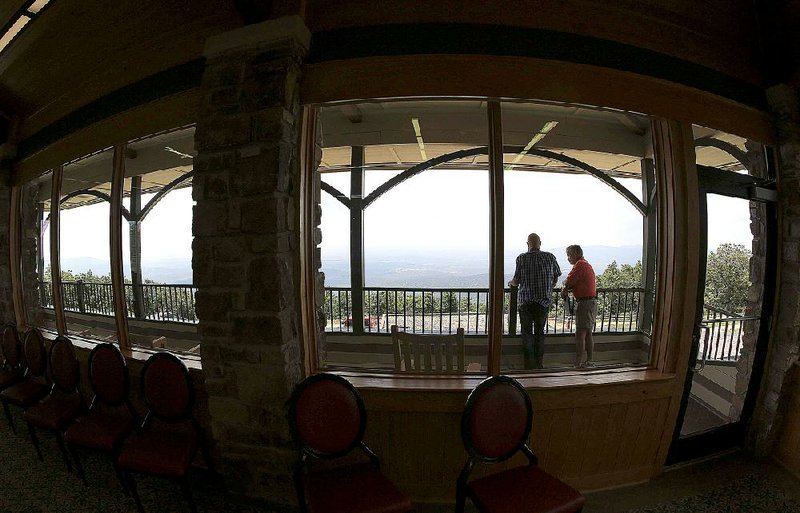 Members of the state Parks, Recreation and Travel Commission, Jim Shamburger (left) and Bill Barnes, check out the view from new, wider windows Thursday at the Queen Wilhelmina State Park Lodge near Mena. 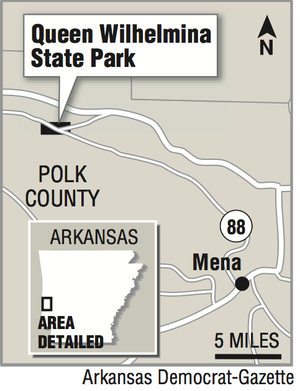 Expanding the lodge from 25,881 square feet to 37,029 square feet will not only give visitors swanky new accommodations to enjoy the view and trails atop the 2,861-foot-tall Rich Mountain, but it will also help shore up parks revenue. In 2011, the last year the lodge was open to the public, it took in about $1.2 million.

The renovations -- which include yanking out dated 1970s carpet, decor and equipment, and installing a new fire response system, gas-burning fireplaces, spa tubs in some rooms and wider windows to frame the views of the surrounding Ouachita Mountains -- are expected to draw even more annual revenue, State Parks Director Greg Butts said.

Not only that, the gas station and antique shop at the bottom of the hill benefit from any uptick in visitors, Butts added.

"There's a far greater impact than the money that comes into the registers here," Butts said. "Look at all the amenities in Mena that will benefit when someone has to stop for gas, shop for shoes. And the further away they are, the more money they spend in the state along the way. If you live in the state and never come here, you're still benefiting from this great investment."

That ancillary impact was stunted by the lodge's delayed opening. The project was awarded to general contractor Wade Abernathy Inc., who had previously constructed the Cossatot River visitor's center at Wickes. By late spring 2013, the contractor was notified of several construction deficiencies and was given 30 days to remedy them. The contract was terminated in late August 2013.

Then, the bond surety Travelers Casualty and Surety Co. of America took over the contract and enlisted Nabholz Construction to complete it and repair the deficiencies.

"It had to be undone and fixed, so it took quite a bit more time," Butts said. "WAI had done a good job previously and was the lowest-qualified bidder."

Butts added that he could not comment further because of ongoing litigation.

Tourism has a more than $6 billion annual impact on the state each year, according to the 2014 state Annual Travel and Tourism Report.

"This is your lodge, your state park," said Joan Ellison, spokesman for Arkansas State Parks. "This belongs to the taxpayers, and we want them to enjoy it."

To Butts, the benefit is threefold: the preservation and conservation of the state's natural resources, recreation and education, and the pursuit of happiness.

"We're in the happiness business. We're in the memories business," Butts said. "You spend one-third of your life working, one-third sleeping and the rest should be spent on the quality of life. That includes getting away from the rat race and taking time to smell the orchids and wildflowers."

Originally built by Kansas City, Pittsburg and Gulf Railroad in 1898 for $100,000, today's "Castle in the Clouds" is the third resurrection of the historic site.

After the original building fell into ruin when its bankrupt owners abandoned it, the state purchased the property and established it as a state park in 1957 and built a new lodge in 1963 -- which burned to the ground in 1973. The current building was constructed in 1975.

"It hasn't seen a lot of updates since then," said Jake Limberg, an interior designer and park planner for the State Parks Department.

Running her hand along the teak bench at the end of a bed in one of the guest rooms, State Parks Commissioner Cindy Smith pointed to the carpet -- a chocolate base with beige damask designs.

"This is gorgeous," she said.

The dark-wood headboards with embossed waves in each room were specially designed by Brian Ashley of Little Rock, while the teak-and-blue chairs were custom-designed for the lodge by furniture manufacturer Shelby Williams.

Limberg pointed to a lamp on a dark-wood writing desk. The stacked sterling-and-teak circles of the base complement the decorative theme of the room.

"This was specially made by Thumbprints in Little Rock. I try to source in Arkansas as much as I can," Limberg said.

The upstairs meeting facility is bigger now, and a balcony was built to overlook the south view from the mountain. An elevator and more stairwells have been added.

Limberg said he "went a little wild" with the new hearth room, which features red-and-tan carpet; dark-red walls; wrap-around, floor-to-ceiling windows; a wood-burning fireplace; oversized chairs and couches; and round, wooden tables for board games or gatherings.

Other improvements include a new heating-and-air-conditioning system, energy-saving lighting, a solar hot-water heater and a new laundry room.

The building's exterior has new shingles and stonework, as well as a wrap-around porch -- complete with scattered wooden rocking chairs -- on the building's south side.

"I am absolutely thrilled with how this turned out," Limberg said. "This is the apex of my career to do something this large. It's beautiful."