S.C. murder counts at 9, one for each at church 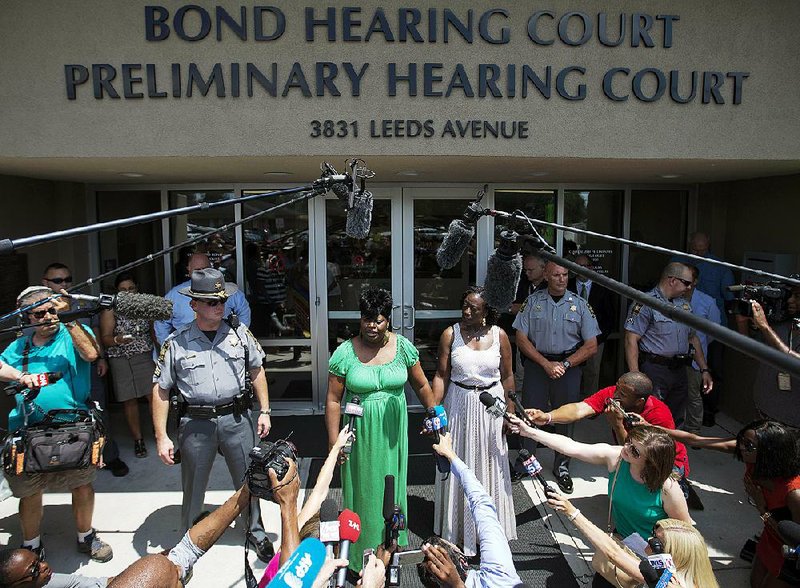 Nadine Collier (left), whose mother, Ethel Lance, was one of the nine people killed in Wednesday’s shooting at Emanuel African Methodist Episcopal Church, speaks to reporters Friday about her mother after the bail hearing for the suspect in North Charleston, S.C.

CHARLESTON, S.C. -- The man arrested in the racially motivated shooting at a storied black church was charged Friday with nine counts of murder, and officials said he told law enforcement officers that he had done something big in Charleston. 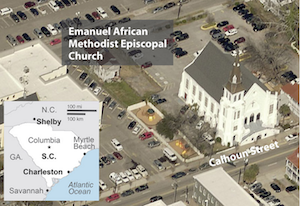 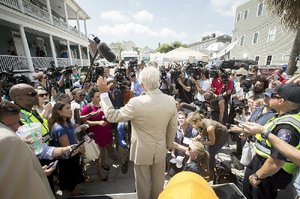 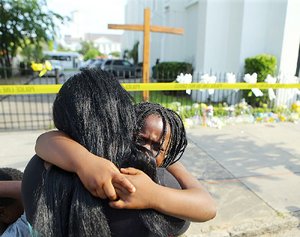 Photo by CURTIS COMPTON / AP
Kearston Farr hugs her 5-year-old daughter Taliyah on Friday while visiting a memorial in front of the Emanuel AME Church in Charleston, S.C. 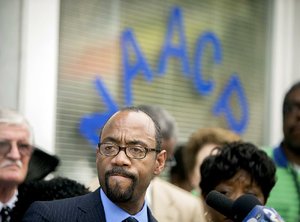 Photo by STEPHEN B. MORTON / AP
NAACP President and CEO the Rev. Cornell William Brooks speaks to reporters during a news conference Friday about the recent shooting. 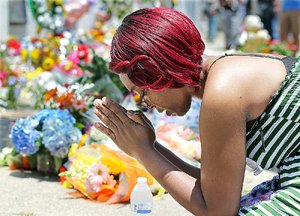 Photo by CURTIS COMPTON / AP
Tisa Martin of Charleston, S.C., kneels to pray at the sidewalk memorial in front of the Emanuel African Methodist Episcopal Church on Friday.

The Charleston Police Department announced charges of murder and possession of a firearm during the commission of a violent crime.

The suspect, Dylann Storm Roof, who is white, was ordered held at least until bail is set on the murder charges. He appeared by video from the Charleston County jail, looking somber in a striped jumpsuit and speaking only briefly in response to a judge's questions.

Law enforcement officials briefed on the matter, who were not authorized to speak publicly about it, said Roof told law enforcement officers that he had committed some important act in Charleston, but nothing more specific. The officials also said the .45-caliber pistol he was believed to have used in the shooting was found in his car.

Relatives of those killed during the church's Bible study session addressed Roof during his initial court hearing, describing their pain and anger, but also speaking of love. From the jail, he could hear them talking but couldn't see them; the camera showed him only the judge.

"I forgive you; my family forgives you," said Anthony Thompson, whose relative Myra Thompson was killed. "We would like you to take this opportunity to repent. ... Do that, and you'll be better off than you are right now."

The families are determined not to respond in kind, said Alana Simmons, who lost her grandfather, the Rev. Daniel Simmons Sr.

"Although my grandfather and the other victims died at the hands of hate, this is proof -- everyone's plea for your soul is proof they lived in love and their legacies will live in love, so hate won't win," she said. "And I just want to thank the court for making sure that hate doesn't win."

Felecia Sanders survived the Wednesday night attack by pretending to be dead but lost her son Tywanza.

"We welcomed you Wednesday night in our Bible study with open arms. You have killed some of the most beautifulest people that I know. Every fiber in my body hurts ... and I'll never be the same," Sanders said.

"Tywanza was my hero," Sanders added, but then even she showed some kindness to the man accused of killing her son: "As we said in Bible study, we enjoyed you, but may God have mercy on you."

"Charleston is a very strong community. We have big hearts. We're a very loving community," said Chief Magistrate James Gosnell, who urged people to find it in their hearts to help not only the nine victims but also "victims on the young man's side of the family" as well.

Roof's public defender released a statement from his family offering prayers and sympathy for the victims and expressing "shock, grief and disbelief as to what happened that night."

Witnesses said the gunman walked into the church and joined a Bible study session, sitting next to the pastor, the Rev. Clementa Pinckney, a state senator. First, witnesses said, he listened; then he argued. Eventually he began ranting against black people, and after nearly an hour there, he stood, drew a gun and fired.

A police affidavit released Friday accused Roof of shooting all nine multiple times, and making a "racially inflammatory statement" as he stood over an unnamed survivor.

The police caught up to Roof, 21, some 200 miles away in Shelby, N.C., on Thursday morning and returned him to Charleston under heavy guard and in a a bullet-resistant vest.

Roof had been arrested twice this year, and friends said he had a recent history of sharing anti-black views. But law enforcement officials said he was not on their radar as someone who posed a serious threat of violence.

Friday evening at the Emanuel church, on Calhoun Street, scores of bouquets lay on the sidewalk, along with wreaths and a simple wooden cross. Gold, silver and white balloons were tied to the church's ironwork; nearby, nine white ribbons, each bearing the name of a victim, were tied to a fence.

Thousands of Charleston residents filled TD Arena at the College of Charleston for an evening prayer vigil suffused with expressions of Christian faith, the history of slavery and civil rights in the city and the state, and a collective resolve to find some meaning in Roof's actions. The crowd was a multicultural mix of residents that included families with small children and old people who needed canes.

"We all have one thing in common: Our hearts are broken," said longtime Charleston Mayor Joseph Riley Jr. at the vigil.

Riley told people in the crowd -- each holding a single rose given to them as they entered the arena -- that if Roof thought he would divide the country, "He failed miserably."

Meanwhile, a growing number of officials, including Gov. Nikki Haley and Sen. Lindsey Graham, R-S.C., called the killings at Emanuel African Methodist Episcopal Church on Wednesday night a hate crime, with the governor and others calling for the death penalty.

"It's certainly a hate crime," Graham told WCBD, the local NBC television station, on Friday. "These people would not be dead today if they weren't black."

"This is an absolute hate crime," she said. "We absolutely will want him to have the death penalty. This is the worst hate that I've seen and that the country has seen in a long time."

Greg Mullen, the chief of police in Charleston, also has called the shooting a hate crime, and Attorney General Loretta Lynch said the Justice Department was investigating that possibility. Justice Department spokesman Emily Pierce said the slayings were "undoubtedly designed to strike fear and terror into this community."

Democratic and Republican leaders alike used the shooting to emphasize their political platforms, looking at the apparent racial motivations of the shooter and talking of gun control and the religious elements of the crime.

Speaking to a group of religious conservatives gathered in Washington, GOP presidential candidate Jeb Bush noted that the shooting took place "in a house of peace and brotherhood."

Ben Carson, the only black candidate in the GOP field for president, came close to labeling the shooting as racially motivated.

"If we don't pay close attention to the hatred and the division that's going on in our nation, this is just a harbinger of what we can expect," he said.

Campaigning Thursday in Nevada for the Democratic presidential nomination, Hillary Rodham Clinton cited racial prejudice as part of the problem but stressed gun control as the primary solution to such violence.

"Let's just cut to the chase," she said in an interview. "It's guns and we have to have a better balance. ... So there's a lot of fear and I think if you stand up to that fear and you say, 'Look, I'm speaking to law-abiding, reasonable people who don't want guns in the hands of unbalanced people, felons, terrorists, we've got to do more.'"

Sen. Bernie Sanders, the Vermont independent who is seeking the Democratic nomination, canceled a Sunday campaign event in South Carolina and sent an email to supporters asking them to donate to the Emanuel AME Church, where the shooting took place.

"The Charleston church killings are a tragic reminder of the ugly stain of racism that still taints our nation," the senator said in a statement. "While we have made significant progress in advancing civil rights in this country, we are far from eradicating racism."

Former Gov. Martin O'Malley of Maryland, another Democratic candidate for president, went further. In an email to supporters, he tried to tap into the anger some Democrats feel about the failed effort to pass new gun regulations in the wake of the Newtown, Conn., elementary school massacre in 2012 and the influence the National Rifle Association has on Congress.

"I'm pissed," O'Malley wrote. "I'm pissed that we're actually asking ourselves the horrific question of, 'What will it take?' How many senseless acts of violence in our streets or tragedies in our communities will it take to get our nation to stop caving to special interests like the NRA when people are dying?"

NRA spokesman Andrew Arulanandam said the organization would not make a statement about the South Carolina shooting "until all the facts are known." He declined to talk about the politics of the gun debate but has previously said that political leaders have learned that "it's bad politics to be on the wrong side of the gun issue."

Around the world, the attack renewed perceptions that Americans have too many guns and have yet to overcome racial tensions.

Especially in Australia and northeast Asia, where firearms are strictly controlled and gun violence almost unheard of, many were baffled by the determination among many Americans to own guns despite repeated mass shootings.

"We don't understand America's need for guns," said Philip Alpers, director of the University of Sydney's GunPolicy.org project that compares gun laws across the world. "It is very puzzling for non-Americans."

A similar effect has been seen elsewhere.

Ahmad Syafi'i Maarif, a prominent Indonesian intellectual and former leader of Muhammadiyah, one of the country's largest Muslim organizations, said the church shooting shocked many.

"People all over the world believed that racism had gone from the U.S. when Barack Obama was elected to lead the superpower, twice," he said. "But the Charleston shooting has reminded us that in fact, the seeds of racism still remain and were embedded in the hearts of small communities there, and can explode at any time, like a terrorist act by an individual."

Many places around the world struggle with racism and prejudice against outsiders, but mass shootings in the U.S., where the Constitution's Second Amendment protects the right to keep and bear arms, often receive widespread global attention.

"Guns are in their constitution," said Joanna Leung, a 34-year-old Toronto resident. "I'm pretty sure no one else has anything similar. I never understand why they think gun violence is going to solve anything."

In China, the official Xinhua News Agency said the violence in South Carolina "mirrors the U.S. government's inaction on rampant gun violence as well as the growing racial hatred in the country."

Print Headline: S.C. murder counts at 9, one for each at church