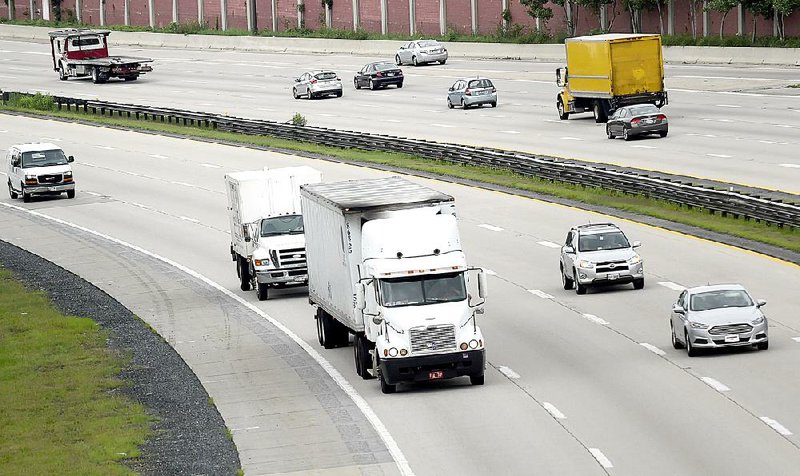 The second phase of standards intended to cut carbon pollution and improve fuel efficiency among medium and large trucks is expected to lower greenhouse gas emissions by 1 billion metric tons and trim fuel costs by $170 billion over the lives of vehicles produced, according to the Environmental Protection Agency and the National Highway Traffic Safety Administration.

The proposed vehicle and engine performance standards, which were announced Friday, apply to tractor-trailers, large pickups and vans, and all types of buses and work trucks. The federal agencies said the standards would achieve up to 24 percent lower carbon dioxide emissions and fuel consumption over a 12-year period and aid the economy, about which U.S. Transportation Secretary Anthony Foxx said in a statement that it was "good news all around."

But the projected improvement in fuel economy sounds "ambitious," and whether it will be enough to balance a rise in other costs incurred by trucking companies because of the new standards will have to be determined, according to an executive at one Arkansas trucking company Friday.

"We're always interested in ways to increase fuel economy," said Jim Cade, who is the vice president of maintenance for USA Truck in Van Buren. "For any fleet, any trucking company, fuel is our No. 1 expense. If we can improve fuel economy, great. But I guess I'm a little bit skeptical if we can do it without increasing our other costs. That's the big challenge."

The proposed standards are the latest round of President Barack Obama's plan to reduce the contributors to climate change. The federal government reported that medium- and heavy-duty vehicles currently account for about 20 percent of greenhouse-gas emissions and oil use in the U.S. transportation sector, but trucks and vans made up only 5 percent of the vehicles on the road.

The current standards for fuel efficiency and carbon pollution cover models built between 2014 and 2018. The federal government said those rules will result in emissions reductions by 270 million metric tons and save vehicle owners more than $50 billion in fuel costs.

The new standards cover vehicles and engines built between 2021 and 2027. The second phase also includes the first standards for trailers, which will be voluntary from 2018 to 2020 and mandatory in 2021. The federal agencies said trailer standards were included because they're an integral part of the vehicle that "significantly contributes to the emissions and fuel consumption of the tractor."

The proposed rules will be open to a public comment period for 60 days and finalized next year.

"It's hard not to be supportive of this these days," said Tom Kloza, who is a chief oil analyst for gasbuddy.com. "Personally, I think it's very, very sensible. It's certainly better for the business than some sort of increased tax or some other way of motivating behavior."

The American Trucking Association voiced its support for the new standards, with Bill Graves, the association's president and chief executive officer, saying in a statement fuel is an "enormous expense" for the industry and carbon emissions carry "enormous cost" for the planet.

But the association also expressed its concern that the new standards may result in the use of technology on vehicles before it can be fully tested. Glen Kedzie, the group's vice president and energy and environmental counsel, said truck and engine manufacturers will need "adequate time to develop solutions to meet these new standards."

USA Truck's Cade agreed after experiencing problems with the new technology required by the first standards. The company had 1,601 trucks as of Dec. 31, 2014, according to a filing with the U.S. Securities and Exchange Commission.

"We need the time to flush out the technologies, to make sure they not only achieve what they say they will but also have the reliability for our operations," Cade said. "Some of the emission changes in the past were pushed out pretty quickly and the technology was not proven and really led to excessive down time and excessive costs in maintenance and repair costs."

The Owner-Operators Independent Drivers Association questioned the proposed standards because of their impact on small trucking companies, saying in a statement truckers already have "every incentive to be efficient since fuel is the highest operating cost for an owner-operator."

The organization, which has over 150,000 members and is based in Missouri, said it was reviewing the proposal to see whether input from small trucking businesses was "truly taken to heart."

"Based on reviews of initial summaries, we do have concerns that the rule will push truckers to purchase technology that is not fully tested and may lead to costs such as increased maintenance and down time that will eclipse the potential savings estimated in the proposal," the organization said.

Three of the largest transportation operations in Arkansas -- J.B. Hunt, Wal-Mart and Tyson Foods Inc. -- declined to comment on the proposed standards Friday.

But Cade said the proposed rule to phase in more fuel-efficient vehicles would affect the price of new tractors, estimating USA Truck has paid an additional $20,000 to $30,000 for trucks that meet the current emissions standards.

He added it's "too early to tell," but wouldn't be surprised if the next phase of the proposed standards would result in another $20,000 increase per truck.

The federal government estimated in its release that the buyer of a new long-haul truck would recoup the investment in less than two years through fuel savings. Garth Hill, the vice president of maintenance at P.A.M. Transportation Services Inc. in Tontitown, said it's about more than just the initial purchase price, though.

Hill said the maintenance and repair costs can be significantly higher for the new equipment and that wait time at dealerships and repair facilities has been "astronomical." P.A.M. had 1,761 trucks as of Dec. 31, 2014, according to a filing with the SEC.

"We want to make sure that whatever we're investing in is sustainable," Hill said. "It may be that they're [the government] doing projections and saying it's a two-year payback, but we want to make sure it's not just a payback off the initial investment but also what's it going to cost to maintain [the trucks] ... so we truly see there's a payback within a three-year period because that's our typical cycle for equipment."

No one debates the need for continued improvement in fuel efficiency and the reduction of emissions. Cade estimated that USA Truck has taken measures to improve its fuel efficiency by 15 percent to 17 percent over the past two years. Hill said his company was one of 44 carriers to receive the SmartWay Excellence Award from the EPA, which recognizes excellence and achievements in protecting the environment and incorporating sustainability.

So Hill said being more fuel-efficient is the "right thing to do" for trucking companies.