At firm, intent is investor matches 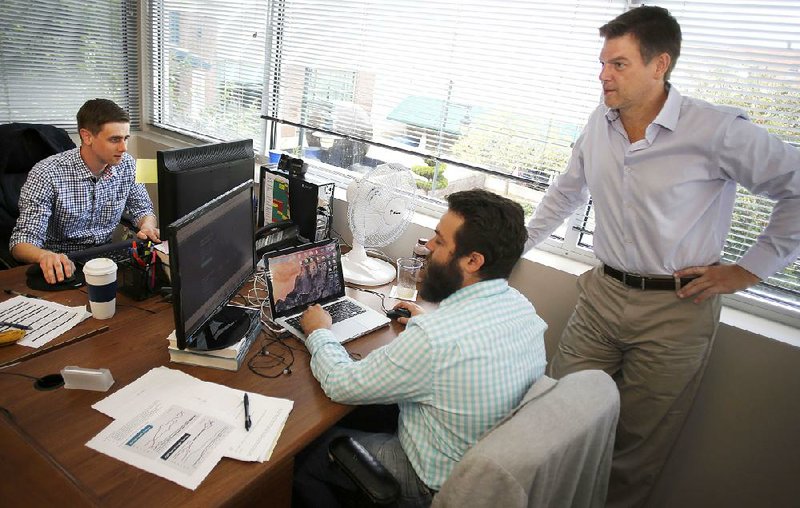 FAYETTEVILLE -- EquityNet's beginnings came from what CEO Judd Hollas described as a capital marketplace "epiphany" on a walk home from work in Fayetteville more than 10 years ago.

There were eager entrepreneurs. There were interested investors. So Hollas figured there had to be a method to create an efficient online marketplace that would give those entrepreneurs an easier way to gain access to a large group of investors.

"I got turned down a lot back in the early days by people telling me I was crazy, investors would never go online to do this," Hollas said about the company, which began operations in 2005. "They thought it would always be done the old-fashioned way."

Hollas, 42, and his company are reaping the rewards from the idea. The Fayetteville-based company has topped $330 million in funding raised by entrepreneurs since its inception, and the platform now lists over 16,000 companies on its website, including 220 based in Arkansas, and 21,000 investors.

While platforms like Kickstarter and Indiegogo are considered crowd-funding giants, EquityNet also is a big part of a booming industry showing no signs of letting up.

Research firm Massolution collected data from 1,250 active crowd-funding platforms and reported that they had raised $16.2 billion since 2014. That represented a 167 percent increase from the 2013 total of $6.1 billion. Those platforms raised $2.7 billion in funding in 2012, and Massolution projects another big jump to $34.4 billion in 2015.

The projection is no surprise to Warwick Sabin, the executive director of the Arkansas Regional Innovation Hub in North Little Rock. Sabin said the crowd-funding potential, especially for startups, is limitless even though it may never serve as a major long-term source of capital investment for any company.

"It's a great way for a startup to get off the ground and to get that initial infusion of capital that allows them to operate and get through the first few months of existence and prove their value proposition through customer acquisition and product development," Sabin said. "Where you have people who are interested and willing to invest and you have a platform that allows for this kind of engagement, it can only be beneficial for everyone involved."

EquityNet's focus is on the business side of crowd-funding and open to all types of companies seeking capital from interested investors. Much of the platform is free for entrepreneurs, but certain features require payment of subscription fees that range from $199 a month to $1,308 per year. EquityNet also is free for investors, but the company puts them through a screening process before granting full access.

The company reports that its web traffic, revenue and activity are growing at rates of 100 percent to 500 percent annually. Hollas, who began his career as a chemical engineer before getting swept up in the dot.com boom in the late 1990s, is proud of the progress after the company experienced early struggles.

Hollas said it took six months for EquityNet to receive its first investment. There were issues with the initial management team as well. Hollas even considered moving the company to Austin, Texas, at one point, but EquityNet remained in Fayetteville and is building a strong reputation. EquityNet has been granted five patents for its platform, which the company uses as a means for funding as well.

But EquityNet isn't simply helping itself.

Jesse Core, the principal owner and founder of Springdale-based Core Brewing and Distilling Co., said the platform was one of the avenues his young company used to tap into some potential investors that ordinarily wouldn't have been available.

Core -- who also has a background in software development -- declined to say how much he raised through EquityNet, but said the platform led to a connection with a valuable investor.

"As an entrepreneur, a software developer, a finance guy, I think crowd-funding is a no-brainer," Core said. "For companies looking to raise some capital to get started, it's a wonderful mechanism."

The crowd-funding industry received a significant boost to make that possible three years ago, when President Barack Obama signed the Jumpstart Our Business Startups Act into law. In September of 2013, the U.S. Securities and Exchange Commission implemented Title II of the JOBS Act, which lifted an 80-year ban that prohibited entrepreneurs and small businesses from advertising to attract potential investors.

"The main impediment to extending crowd-sourced funding beyond the initial Kickstarter model was to get this sort of regulatory approval," Sabin said. "Serious investors and companies that were looking to get more permanent traction probably weren't going to either engage or take advantage of the maximum potential that crowd-sourcing offers."

The SEC is still working on the implementation of Title III of the act, which Hollas described as the "big elephant" for the industry. Until the JOBS Act, companies could seek funding only from accredited investors who met specific wealth or income levels. Title III, when implemented, will allow equity crowd-funding from non-accredited investors as well.

Hollas is optimistic the SEC will finalize the new rule by the end of the year, which will only add to a company he hopes will become a household name.

"It will allow anybody, any 25-year-old, whatever, to invest up to 10 percent of their income per year in what they think is the next Facebook," Hollas said. "That means all of America can engage in crowd-funding just like everybody uses Fidelity, E-Trade or (TD) Ameritrade."