Things of the past 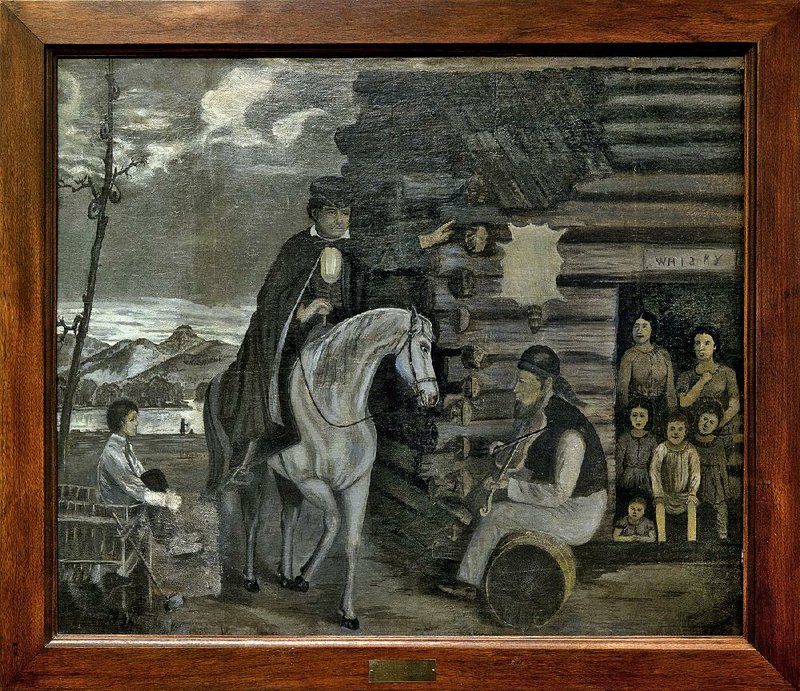 Edward Payson Washbourne’s original painting The Arkansas Traveler is one of the state’s most cherished artifacts. The image created by the painting — Arkansas and its hillbillies — has persisted.

Arkansas has a rich and complicated history. And the richly complicated people who made that history left behind artifacts that describe their lives. Some of those artifacts are lost forever. Others survive and are accessible to the public. 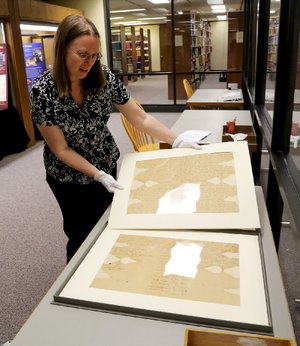 Photo by John Sykes Jr.
Julienne Crawford of the Arkansas History Commission displays the original copy of the 1824 Quapaw Treaty. 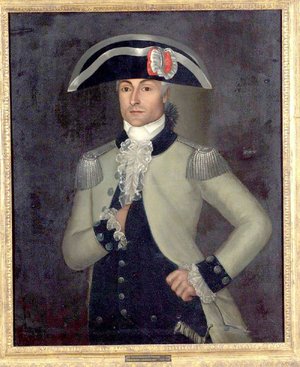 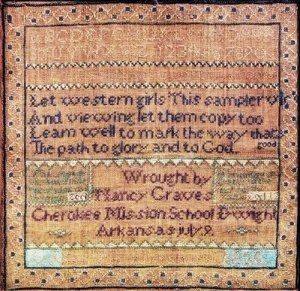 Photo by Special to the Democrat-Gazette/Historic Arkansas Museum
The Graves Sampler was made in 1828 by Nancy Graves, an 11-year-old Cherokee girl, at Dwight Mission, a Presbyterian school near Russellville. 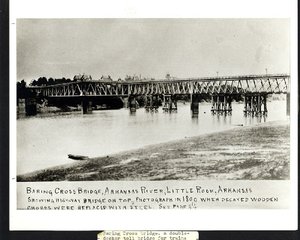 Photo by Special to the Democrat-Gazette/Arkansas History Commission
The Baring Cross Bridge, circa 1890, had its wooden upper structure replaced with steel. 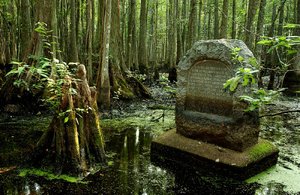 Photo by CHUCK HARALSON / Arkansas Department of Parks and Tourism
A stone marker at Louisiana Purchase State Park points out the spot where the survey of the Louisiana Territory began in 1815. 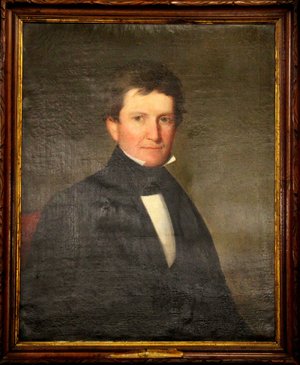 Photo by Special to the Democrat-Gazette/Historic Arkansas Museum
George Catlin, the famed painter of American Indians, painted this portrait of John Drennan, an Indian agent in Van Buren in the mid-1800s. Drennan also was an important Van Buren businessman.

Several Arkansans -- preservationists, historians, archaeologists -- were asked what they consider to be the best artifacts. They responded, graciously, and cumulatively created a list long enough to write a book.

Ten of those are described here.

WHAT: The original painting of The Arkansas Traveler by Edward Payson Washbourne

WHERE: Arkansas History Commission, behind the state Capitol, Little Rock

WHY: Washbourne's painting dates to 1856. It is based on the tale of Col. Sanford Faulkner, who was lost in rural Arkansas in 1840 and stopped at a squatter's cabin to ask for directions. Faulkner wound up playing the second part, or "turn," of the tune being played by the squatter on a fiddle.

Washbourne's painting was popularized by a lithograph in 1859, and included the sheet music.

The original painting at the History Commission is accompanied by Washbourne's self-portrait and a lithograph with the sheet music. He died in 1860 at 29.

Julienne Crawford, History Commission curator, is confident the painting is the original. It was donated to the commission in 1957 by descendants of Washbourne's sister, Abigail Washburn Langford, along with the self-portrait and two other paintings.

WHY: The treaty took away all land owned by the Quapaw Nation. The tribe lived in what became Arkansas and first encountered French explorers about 1673. Epidemics and depredations by other tribes reduced the Quapaw to no more than 750 by the time of the 1824 treaty.

Fifteen members of the Quapaw tribe signed the treaty. Each wrote an X after his name. Representing the United States, and signing the treaty, was Robert Crittenden, later a governor of Arkansas.

The tribe wound up in northeastern Oklahoma. It's back in Arkansas by virtue of its ownership of 160 acres near the Little Rock industrial port.

Crawford said the treaty is available for viewing only by approval of the director, Lisa Speer. Digital copies are available.

Credit for its existence goes to John L. Ferguson (1926-2006), the state's longest serving historian, said Richard Davies, executive director of the Department of Parks and Tourism.

"He came into my office and said, 'Look what I found,'" Davies said of a day in the late 1970s or early 1980s. "They were throwing stuff away in the basement of the state Capitol. He went through the boxes and salvaged it."

WHY: Two large mounds -- 49 feet high and 39 feet high -- plus several smaller mounds were built between 650 and 1050 by American Indians of the Plum Bayou culture. The site is now a state park, established in 1980. "That makes it outstanding in its own right," Elizabeth Horton, the archaeologist there, said.

"It speaks to the long, deep human history in Arkansas. It also speaks to Arkansas' willingness to protect and preserve the past."

"I oftentimes talk about what it says about how phenomenal the engineering skills of these people were, these native American Indians. These were incredible features of landscape engineering."

Toltec "is a glimpse of, a chance to see, large-scale human ingenuity, pre-modern, on the landscape. And to see just how sophisticated the people were who were before us."

WHAT: the Graves sampler

WHY: Nancy Graves, a Cherokee, made this sampler at age 11 in 1828 at a Presbyterian school, Dwight Mission, near what is now Russellville.

The school educated and Christianized Cherokees on their way west from Tennessee and Georgia.

"A sampler was a way for every well-brought-up lady of European descent to show her ability as a productive member of society," Bill Worthen, director of the museum, said. And so it was for Cherokees, he said, "in a place as rough and unsettled as anywhere in the organized territory of the United States."

The sampler is on display at the museum, and should be for a while, Worthen said.

Worthen said the museum acquired the sampler in 2013 at an auction at Sotheby's in New York, bidding against the Smithsonian Institution. The purchase was possible by a grant of more than $80,000.

WHY: Valliere, a Frenchman, was Spanish commandant of Arkansas Post, and previously served the French crown in Arkansas. In 1793, Spain awarded him a grant of more than 6 million acres, a mass of land, the museum said, equal in size to Belgium.

The artist, Jose Francisco Xavier de Salazar y Mendoza, was the pre-eminent portraitist of colonial Louisiana. The portrait was likely done in New Orleans about 1787.

Arkansas Post was the first, and most important, European settlement in Arkansas, dating to 1682 when the French officer Henri de Tonti acquired land and a trading concession at the confluence of the Arkansas and Mississippi rivers.

Valliere, Worthen said, "represented the European presence before this became the United States. It was a period when all things seemed possible."

Valliere hangs in the Historic Arkansas Museum, a gift in 1994 of Mr. and Mrs. A. Howard Stebbins III.

WHAT: the Baring Cross Bridge

WHERE: over the Arkansas River, downtown Little Rock

WHY: On its site was the first permanent bridge over the Arkansas River, Cary Bradburn, city historian of North Little Rock, said. Until the bridge's construction in 1873, the only way across was by ferry -- except, he said, when the river was low enough to walk. A deck was built on top of the bridge in 1877, so the bridge doubled as a highway bridge for the public.

"It was a link to the railroad system, which was an economic engine," Bryan McDade, curator of collections at the Mosaic Templars Cultural Center in Little Rock, said.

The bridge allowed for more efficient use of the railroad, McDade said -- no waiting for ferries. And it was operable even when the river was too high for ferries.

That bridge was swept away by the great flood of 1927. Rebuilt and reopened in 1929, the bridge was later modified with a lift span to accommodate river traffic.

About 25 Union Pacific trains pass over the bridge every day.

WHAT: Portrait of John Drennan by George Catlin

WHY: Drennan (1801-1855) was a businessman and Indian agent in Van Buren. Catlin was a painter whose specialty was portraits of American Indians.

Is the Drennan portrait noteworthy for Drennan or Catlin?

"When Catlin came out West to document the Indians, at one point he stayed with Drennan and painted a number of Indians at the Drennan house. Catlin was a very important figure. Without him our understanding of the Indian world would be greatly diminished."

As for Drennan, "he was a major player in early Arkansas, a very important businessman in Van Buren, agent to the Choctaws, and a regional superintendent for the Bureau of Indian Affairs."

Historic Arkansas Museum has the painting in storage, but has displayed it. It was acquired after the death of the last person of the last generation to live in the Drennan-Scott House in Van Buren, Worthen said.

The original one-room house was built between 1834 and 1836. The expanded house is a museum operated by the University of Arkansas at Fort Smith.

WHAT: a woven fiber bag filled with chenopodium (aka goosefoot) seeds

WHERE: University of Arkansas Museum, Fayetteville

WHY: The brown bag, made of dried grasses, was found in 1932 in a rock shelter at Eden's Bluff in Benton County, Mary Suter, curator of collections, said. It's about 10 inches tall and 6 inches around, with a cord tie at the top. When found, it was filled with "teeny-tiny brown-black seeds." She described the bag as "beautifully preserved."

State Archaeologist Ann M. Early said the bag is about 2,000 years old and represents the participation of ancient Arkansans in the domestication of plants and animals.

Early said there are a handful of places in the world where people independently domesticated plants and animals, which led to more complex societies. One of those places is the United States' southeast. The bag and its seeds show that Ozark residents were among those pioneers.

The bag was recently returned to the museum from Louisiana State University, where it spent 10 years with researchers there.

"It's available to other researchers," Suter said. "We're not likely to put it on exhibit because we don't have an exhibit venue."

WHY: "You can draw a line of American popular music from vaudeville to hip-hop and he is the common thread to all of those genres of music," said Stephen Koch, author of Louis Jordan: Son of Arkansas, Father of R&B. His syndicated radio program Arkansongs is broadcast on Arkansas affiliates of National Public Radio.

"He was an incredibly popular artist of the 1940s," Koch said. "He sold millions of records and had more than 50 Top 10 hits. Another reason we consider him an innovator was that he permeated the culture with phrases like 'Ain't nobody here but us chickens.' We still say that today."

The saxophone, Koch said, "is a fantastic talisman for everything that came out of American music."

Bill Gatewood, museum director, said the saxophone was acquired in 2002. It was bought from a collector of music memorabilia. It's currently on exhibit.

WHAT: A granite monument at Louisiana Purchase State Park

WHERE: on Arkansas 362 at the juncture of Lee, Monroe and Phillips counties

WHY: France sold 828,000 square miles of its Louisiana Territory to the United States in 1803. Twelve years later, President James Madison ordered a survey of the area, which stretched from the Gulf of Mexico to the Canadian border.

The survey's initial point was at this spot, and began in October 1815. Two surveyors, Prospect Robbins and Joseph Brown, spent months on the project using only a compass and a chain.

John Gill, a Little Rock lawyer and member of the state Parks, Recreation and Travel Commission, said the survey opened the West.

"It was the vehicle which made it possible for people to own land in a legal manner," he said. "Up to that point land was measured from a creek to the next barn."

The monument was placed in 1926 by the L'Anguille Chapter of the National Society of the Daughters of the American Revolution. The park was established in 1961.

An elevated boardwalk above the headwater swamp of the Little Cypress Creek watershed leads to the monument.

"It's an absolutely magical area," Gill said. "You're out there in the middle of nowhere, walking on water."

Print Headline: Things of the past