Vilonia man has roots in horticulture 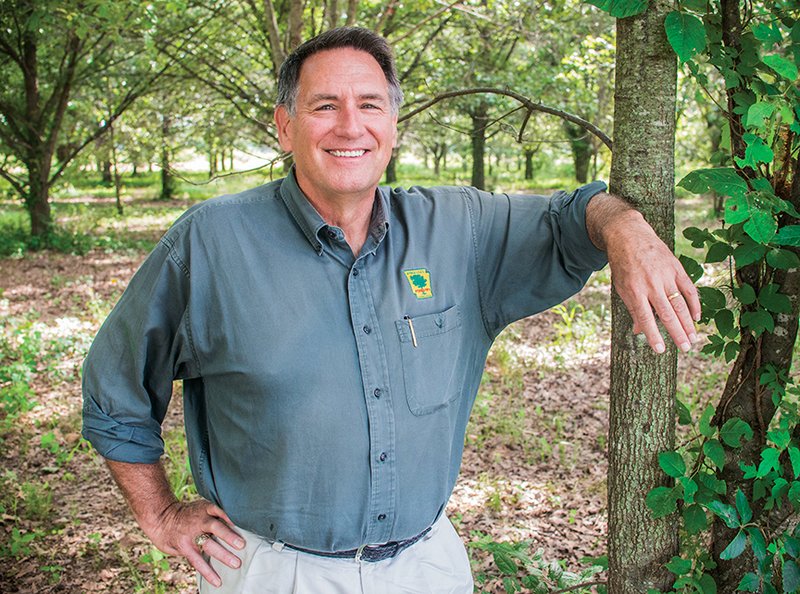 Dave Bowling of Vilonia stands among a grove of trees at the Arkansas Forestry Commission’s Baucum Nursery, which he oversees in North Little Rock. The nursery sells seedlings to private landowners. Bowling, reforestation manager for the commission, also oversees the tree-improvement program. Bowling said he loves his job because trees will help future generations.

Dave Bowling of Vilonia doesn’t think people should feel guilty about using paper products or cutting down a tree — he and his staff have it covered.

Bowling is the reforestation manager for the Arkansas Forestry Commission.

“Forests are truly sustainable,” he said. There is more forested acreage in Arkansas now than in decades, “easily,” Bowling said.

Bowling starts his day at the Arkansas Forestry Commission’s Baucum Nursery in North Little Rock, where seedlings are grown and sold to private landowners.

Bowling, 57, oversees the nursery, which he calls one of the “best-kept secrets” in the state, and the tree-improvement program.

He said that as part of the tree-improvement program, the highest genetic-quality seeds are produced for loblolly pines, short-leaf pines and a few hardwoods. The loblolly pine is “the money-maker in our part of the world,” he said.

“We grow about 10-15 million seedlings a year. We operate at absolutely no cost to the taxpayers,” he said. Bowling said if a private landowner wants seedlings for a wildlife habitat, to grow trees for a profit or just for aesthetics, “our guys can help write management plans to help you achieve what your objective is.” The foresters can check to see if a person is eligible for financial assistance, too.

In the tree-improvement program, “we’re improving growth rate, disease resistance in pine trees. Growth rate is the No. 1 criteria, but tree form … and tree quality are the other criteria we select for,” he said. “If you’re raising for timber, it’s important to have straight trees.

“A lot of people have a misconception about tree breeding. They think it’s something that wouldn’t naturally happen. All we’re doing is like prearranged marriages. We know the lineage of the male and female. We’re just arranging to have the best parents crossed.” As far as genetic improvements, “we haven’t even scratched the surface,” he said. He emphasized that the commission is not genetically modifying anything. “We’re just putting male pollen on the female flower.”

When someone says they’re killing trees when they print paper copies, Bowling said that’s a misnomer. It’s “taking food out of someone’s mouth” not to use paper products, he said. “You don’t have to go drill oil to make a product with paper or wood.”

Bowling’s passion for horticulture was nurtured by seeing his father, who retired as district director, work for the University of Arkansas Cooperative Extension Service.

Bowling said his family moved around with his dad’s job — to Ozark, Berryville, Jasper, Cherokee Village, then Batesville, where Bowling graduated from high school.

“It worked out. It was an easy transition for me,” Bowling said. “I probably developed some people skills; it’s forced upon you when you’re the new kid in town.”

He loved sports, especially running. “I was a pretty good miler,” Bowling said. He also loved the outdoors. Even though he was offered a basketball scholarship to Arkansas College (now Lyon College) in Batesville, he decided to go to the University of Arkansas at Fayetteville.

“I knew I wanted to go into science,” he said. He earned a degree in horticulture with an emphasis in genetics.

“I really liked the whole horticulture department. It was a pretty close-knit group,” he said. His interest in genetics came after he started to school. “The guy who developed the Arkansas Traveler tomato was one of my professors,” he said.

Bowling said he was a graduate assistant until funds ran out, and the dean of the College of Agriculture told him about a job at Weyerhaeuser in Hot Springs doing tree-improvement research. “It was the only job I ever interviewed for,” he said.

After two years, the Hot Springs division cut back on research, Bowling said, and he was transferred to Weyerhaeuser in Connecticut, where he worked for close to 10 years.

When that division sold, Bowling said, he was divorced and decided to come back to Arkansas. The company paid for his master’s degree at the University of Arkansas at Little Rock, and he worked part time at a telemarketing company, where he met his wife, Cindy.

“I talk with them every day, but I usually don’t make a trip down there unless they need me or we’ve got some project going on I’m involved with,” he said.

“My job is 99 percent administrative,” he said. Bowling starts his day at the nursery. “My management style is not to give direction as much as support. My personal objective is to give them the resources to do their jobs.” He then heads to his office at the Arkansas Forestry Commission on West Roosevelt Road in Little Rock.

His home and heart are in Vilonia, though.

Bowling, his wife and their two sons were living in Sherwood when he started working for the Forestry Commission, but he said they felt like the community was getting too big.

They started looking for a place to move to, and Vilonia caught their attention.

“Vilonia had some of the highest test scores in the state,” he said. While on vacation to Florida, they met some people on the beach who were from Vilonia. Bowling said he thought maybe it was a “sign from God” that they were supposed to move to Vilonia, which they did in October 2001.

“The reason we moved to Vilonia was for the small-town values and great school system. We thought, ‘We don’t want to be just takers. We want to give back,’” he said.

Bowling is vice president of the Vilonia Area Chamber of Commerce Board of Directors and a member of First Baptist Church.

He and his wife opened Pace Fitness and Nutrition in 2002 “as a ministry for the community with the objective of increasing quality of life.”

“I don’t think you can be in good spiritual or mental condition if you’re not in good physical condition. That’s just the way our bodies are made,” he said.

Bowling’s muscles came in handy recently when a new neighbor was stranded in her car after a creek flooded. A piece of firewood was caught under the car, he said, and he lifted the frame. “It’s a good thing I work out,” he said, laughing.

The Bowlings were renting space for the fitness center; then they built a facility on South Church Street in Vilonia. The building received more than $150,000 worth of damage, mostly to the roof, in the 2014 tornado. “It went right over us and left our building standing,” he said. Bowling said the fitness center never stopped operating, and the couple allowed Vilonia Therapy Services to work out of the building for a while after that business was destroyed in the tornado.

Chamber President Debbie Townsend praised Bowling and his wife for being “hard workers” in the community.

“Dave has been a very active participant in the chamber for a while, and he is very open and willing to help out whenever necessary. He has held chamber open houses at his place, at the fitness center. He’s always willing to do whatever he needs to do to help with the chamber and help with the community,” she said. Townsend said the couple allowed storm victims to use the showers at the fitness center, and it was the central drop-off location for lost pets after the 2014 tornado.

Bowling said he and his wife don’t pay themselves a salary — they put everything back into the business.

“I believe God’s blessed us because of our faithfulness to our mission God’s called us to do,” he said.

He said people ask how he can come to the fitness center and work every day when he finishes his other job.

“This is a stress relief to me,” he said. “There’s energy, … and that inspires me. My personal belief is the only way to be happy with the job you do is to be giving to someone else. If you have something in your profession you’re providing for other people, you’re happy.”

He feels that same way about his job as reforestation manager.

“I love it; I love it. We are actually in a position every day to make changes that are going to affect the world after we leave it,” he said. “What we do in forestry is one of the most significant things that can contribute to the survival of the planet. … There is nothing that I’m aware of that promotes more benefits to the human race than trees.”