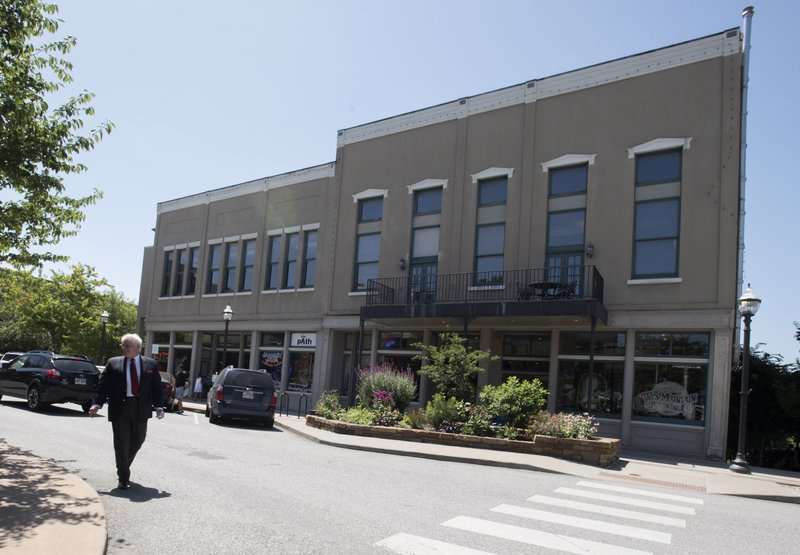 Steve Clark walks along Mountain Street on Thursday after a news conference announcing the Fayetteville Chamber of Commerce has purchased the Bradbury Building.

FAYETTEVILLE -- The entrepreneurial community gained a third space around the downtown square Thursday.

The movement began when Startup Junkie Consulting moved last year to offices on the second floor of the Pryor Center at 1 E. Center St.

The Fayetteville Chamber of Commerce announced Thursday it was buying the Bradberry Building at 21 W. Mountain St. on the south side of the square and dedicating one floor to entrepreneurs.

"We want to create an ecosystem of innovators," Steve Clark, the chamber's president and CEO, said during a news conference Thursday with the Bradberry as a backdrop.

The chamber is moving its offices to the second floor and plans on building a third floor for meeting space within the next two years, he said. Main floor tenants, including Tiny Tim's Pizza and West Mountain Brewing, plan on staying in place after the building's sale closes in October. Clark refused to provide a purchase price. The Washington County assessor's office estimates the building's market value at $1.15 million.

The lower level will become an Arkansas Regional Innovation Hub Launch Pad maker space in the first quarter of 2016.

The Hub is a nonprofit organization in North Little Rock, which started two years ago and fills a 20,000-square-foot center. It houses four programs to help entrepreneurs grow ideas and businesses, said Warwick Sabin, the Hub's executive director.

Word was spreading quickly a Fayetteville site was opening. Sabin received a text message shortly after Thursday's news conference from one of his North Little Rock employees stating someone had already called to ask when the Northwest Arkansas site was opening.

The Fayetteville hub will have equipment that can be used to design or create prototypes of ideas. Equipment will include high-tech products such as 3-D printers and manufacturing machines and daily tools such as sewing machines and welders.

Joel Gordon, director of the launch pad, said center leaders worked hard to keep membership rates low, ranging from $40 a month for students and senior citizens to $60 a month for an individual.

Both centers will be available to schools, individuals and businesses. The interaction with schools was initially going to be a small part of the program in North Little Rock, but has become a focal point, Gordon said. Students tour the center almost daily when school is in session and are participating in camps and other events this summer.

"If you are the next genius engineer, how are you going to be discovered," he said.

Sabin said that also applies to business leaders looking for talented workers, comparing the site to a training camp a sports team might use to scout and select players.

A maker space could help someone make a prototype he may have otherwise not been able to produce, Gordon said.

"Most new product ideas die before they even get to the manufacturing stage," he said. "It's about creating accessibility."

Sabin said he's not surprised his first hub outside of central Arkansas is in Northwest Arkansas, pointing to Startup Junkie, the University of Arkansas and Hayseed Ventures.

Renovations are under way at Hayseed Ventures and James said he's already working with five companies.

James and his employees fill the main floor, there is room for four startups to work on the second floor and the basement is being turned into a 5,000-square-foot coworking space.

"If we don't have 100 people working out of that building by year's end, we aren't doing it justice," he said.

James has nine workers on staff and plans to expand to 15 later this year.

He wants to raise $6 million to help startup companies grow and said he's about halfway there with all the money coming from Arkansans.

James said this is the fourth time he's created and raised money for a business and he learns something new each time. He was a co-founder of Acumen Brands and helped the firm secure $100 million.

"I'm trying to build a great company, but really trying to change Arkansas," he said.

"Great things happen when you get great people together," he said.

Sabin said being so close to the other organizations allows the hub to narrow its focus because it doesn't need to duplicate services such as coworking space.

"It's totally mutually beneficial and creates a situation where everyone wins," he said.