It's a grand old flag 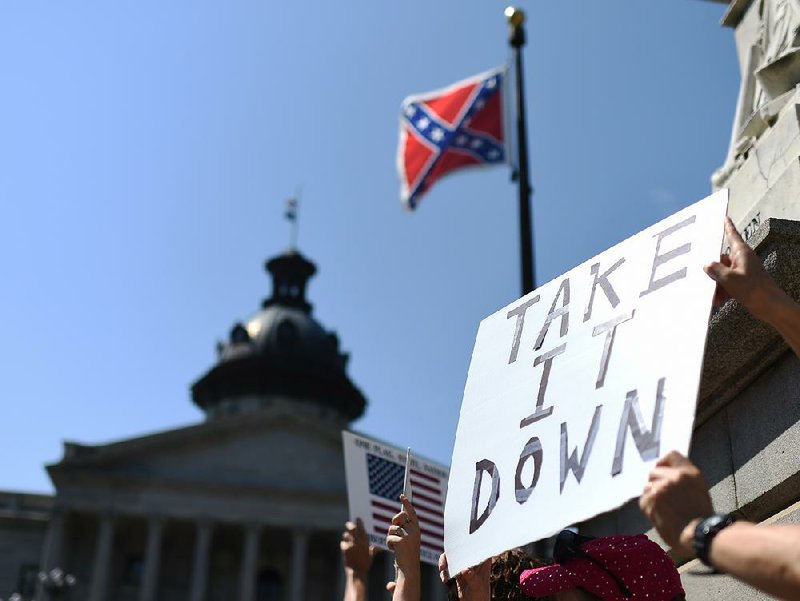 Protesters hold a sign during a rally to take down the Confederate flag at the South Carolina Statehouse, Tuesday, June 23, 2015, in Columbia, S.C.

The colorful banner that waves above South Carolina's state Capitol--who knows for how much longer?--represents the many virtues and values of this our South, only beginning with valor and pride. At times the old emblem is even used as a symbol of our music or cuisine or the hospitality that used to be a byword (Southern Hospitality) however much it's been commercialized. Just as Southern Gentleman is no longer one word but a vanishing breed.

But how could this banner, the proud Confederate battle flag, ever be something to be ashamed of? For it was carried into battle after battle to the accompaniment of shot and shell--and rebel yells--by the Army of Northern Virginia (R.E. Lee, Commanding General). Which may have been the last remnant of chivalry that Western civilization still had before those mushroom clouds over Hiroshima and Nagasaki proclaimed the arrival of our new, modern, scientific, and thoroughly barbarous way of making war.

This is the same colorful banner that many in South Carolina and elsewhere would like to haul down, for it represents all the follies and failings of this our South, and its grievous sins that all of us still bear around our necks like old man Marley's chains and weights. Consider the South's long history of racial oppressions, which go back to slavery times and continued under shameful successors like Black Codes and Jim Crow.

There's your proud old flag for you and what it really calls up--"the image of God on the auction block." Virtues and values? Like what? The way the law of the land was defied by Southern governors like Orval Faubus to George Wallace? A general contempt for the brotherhood of man?

So which is it--a flag to fly with pride or one to be taken down and hidden away with all deliberate speed? It's both, of course, for whatever this our South is, it ain't simple, or easy to understand. Neither are Southerners--despite our outwardly easy-going, aw-shucks ways. Maybe you have to live in these latitudes to understand, and not just live here but be part of it, wholly and without reservation, for these are Your People, black and white together. Southerners to the bone and marrow.

So what would your choice be at this juncture of our history--honor the past or accede to the ever pressing demands of the present? And having done so, what of our future? Shall we free the South of any and all encumbering emblems, leaving her a blank? Or devise some brave new flag neither hallowed nor disgraced by history, signifying nothing? For emblems freed of time are freed of meaning.

Treat it gently--it is holy--

For it droops above the dead.

Let us do the old flag honor even as we lay it to rest. The way General Grant's grand army of the Republic stood at attention as the starving, tattered remnants of Lee's Army of Northern Virginia marched off the field at Appomattox into history, their sidearms and sabers and invincible pride still in place, to begin the long, long journey home. And back into the Union.

There is bound to be a place for the old flag yet--like at Washington and Lee, where the old general devoted his final years to educating the next generation in better ways. And let the old flag still adorn the graves of the Confederate dead for God's sake.

Turn your eyes to the immoderate past,

Turn to the inscrutable infantry rising

Demons out of the earth--

they will not last.

Lost in that orient of the thick and fast

You will curse the setting sun.

So, please, a little reverence, even humility. Even as we furl the old banner. In the end, in the spirit of union, justice and confidence, not to say faith, hope and charity, all of us will surely do what we know to be the right thing. For old times there are not forgotten even as His truth goes marching on . . . .