29 counties given federal OK for help 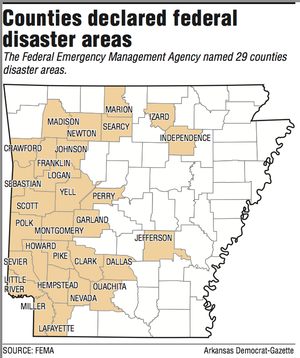 The declaration allows residents to seek grants and loans to pay for temporary housing, home repairs and losses to uninsured property, and for local governments to obtain reimbursement for debris removal and infrastructure repairs.

Rick Fahr, a spokesman for the Arkansas Department of Emergency Management, said teams from his office and with the Federal Emergency Management Agency completed preliminary assessments last week that estimated storms and flooding caused $6 million in damage.

He expects that estimate to increase as the Red River recedes and farmers in southwest Arkansas access their land for the first time in more than a month. Other counties could be added to an amended declaration later, he said.

"The wheels have been turning on this for a couple of weeks," Fahr said. "We still have more work to do."

"This will ease the pain," said Kevin Smith, county judge of Howard County. "Repairs come out of our budget. We have to pay that up front, so this will help a lot."

Howard County estimated it cost $817,176 to remove debris left from a May 10 tornado that struck Nashville. Michael Mooneyhan, 29, and his wife, Melissa Mooneyhan, 28, were killed by the twister that struck their mobile home on West Sypert Street in Nashville.

The county also had to repair at least 20 culverts damaged by flooding and six roads that were washed away during heavy rains, Smith said.

On Friday, the Red River at Index reached 26.3 feet and is expected to gradually recede to 21.2 feet by Wednesday. The river crested at the Index gauge at 31.4 feet June 4. Flood stage there is 25 feet.

The water was high enough Friday to cause state highway officials to close U.S. 71 north of the Red River in Little River County for the second time in two months because of high water. A 2.47-mile section in both directions between the Arkansas-Texas state line north to Arkansas 380 was closed to traffic.

High water on the Red River also forced the same section to be closed from May 29 to June 14.