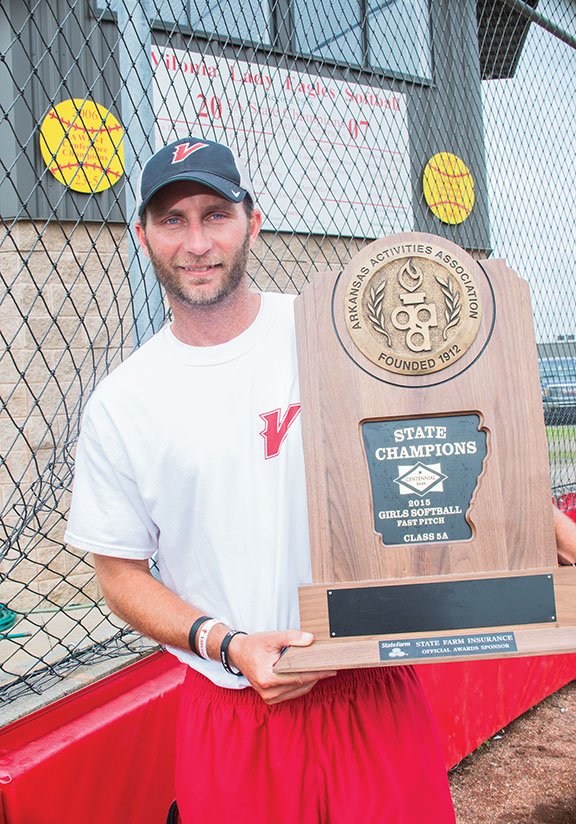 Vilonia’s Kevin Sullivan said that when he started his career, he “never in a million years” saw himself as a girls softball coach; now he’s twice been honored as Coach of the Year in the sport.

The 36-year-old Sullivan, whose Lady Eagles won the 5A-West Conference and Class 5A state softball championships this year, is the River Valley & Ozark Edition’s Diamond Sports Coach of the Year. He was also named the All-Arkansas Preps Softball Coach of the Year.

He said a Coach of the Year title was something he didn’t expect, and it wasn’t a goal.

The De Queen native’s original goal, as hard as it is to imagine, given his success in athletics, was to have a desk job.

“I actually have a business degree,” Sullivan said. “I had everything lined up when I got out of college to be a human-resources manager.”

Sullivan attended Central Baptist College in Conway, where he played basketball and baseball; then he transferred to and graduated from the University of Central Arkansas in Conway.

During an internship in his hometown the year before he graduated, his eyes were opened to what he could expect from sitting in an office all day.

“I really kind of realized that’s not something I wanted to do the rest of my life,” he said of human resources.

When he tried to get a job in that field after graduation, he found roadblocks.

“I was like, ‘The Lord has a plan for me, and obviously, this is not it,’” Sullivan said.

He ran into the Horatio baseball coach, Lance Spigner, who suggested that Sullivan go back to school and get his teaching/coaching degree the nontraditional route. Sullivan fulfilled his educational requirements at UCA to teach and coach, and on his 23rd birthday, he was hired to coach Horatio’s softball team. The coaching responsibilities had been handled until then by a parent volunteer.

“I was hired on a Monday and had a game the next Monday,” he said with a laugh. “Sure enough, I ended up spending nine years there. We ended up going to the state tournament somehow.”

It was a definite change from the career he had pictured. “I really saw myself as a basketball/football guy,” he said. “I never thought about coaching softball, or girls, for that matter. It’s something I’ve really enjoyed. Girls don’t try to outsmart you as much [as boys]; they’ll run through a wall for you if they know you care about them.” Sullivan said the key is to show interest in them beyond the softball field. “You don’t just care about what they can do for you. I try to make it to track meets and basketball games,” he said, because his players often participate in other sports.

After Sullivan’s stint in the Horatio School District, he went to Jacksonville for two years, where he was the middle school football, basketball and track coach — not softball. Soon, however, the high school administration called Sullivan when the softball coach had a heart attack. She recovered and helped him coach that season, but then she retired, and Sullivan took over.

Vilonia kept coming up in conversations, though. A friend of his, who was a Vilonia Junior High School assistant football coach, wanted to get Sullivan into the Faulkner County school district and let him know every time there was a job opening.

“By the third time, I was in Jacksonville, living by myself. I said, ‘This is the third time this gig has popped up.’” He took the job as hitting coach for the Vilonia Lady Eagles softball team under Calvin Robinette and assistant junior high football coach under his friend.

Sullivan has been in the Vilonia School District for three years, two as head coach. He served as assistant for one year, in 2012-13, and when Robinette left for a position in the Conway School District, Sullivan took over for 2013-14. The Lady Eagles won the conference championship and were state runners-up his first year at the helm. That was his second year as coach, and it couldn’t have gone better.

In May, the Lady Eagles (28-4) beat Paragould 5-2 to win the state championship.

Sullivan gives more credit to his players and pitching coach than to his own coaching abilities.

“I’ve got good kids. I’ve seen good teams in the past. I’ve heard coaches talk about their kids, ‘I have to put

up with this.’ My kids are just good kids; they’re very

classy young ladies. They make good grades, and [I have] very few if any discipline problems,” he said.

Moving to Vilonia gave him more perks than good softball players. He met his wife, Hannah, when she came to the middle school one day to visit her mother, who worked there.

“Now we’re expecting our first child in December. We bought a house here; we feel like we’re home,” he said.

Sullivan is at home on the softball diamond, too, a place he never imagined he’d be.