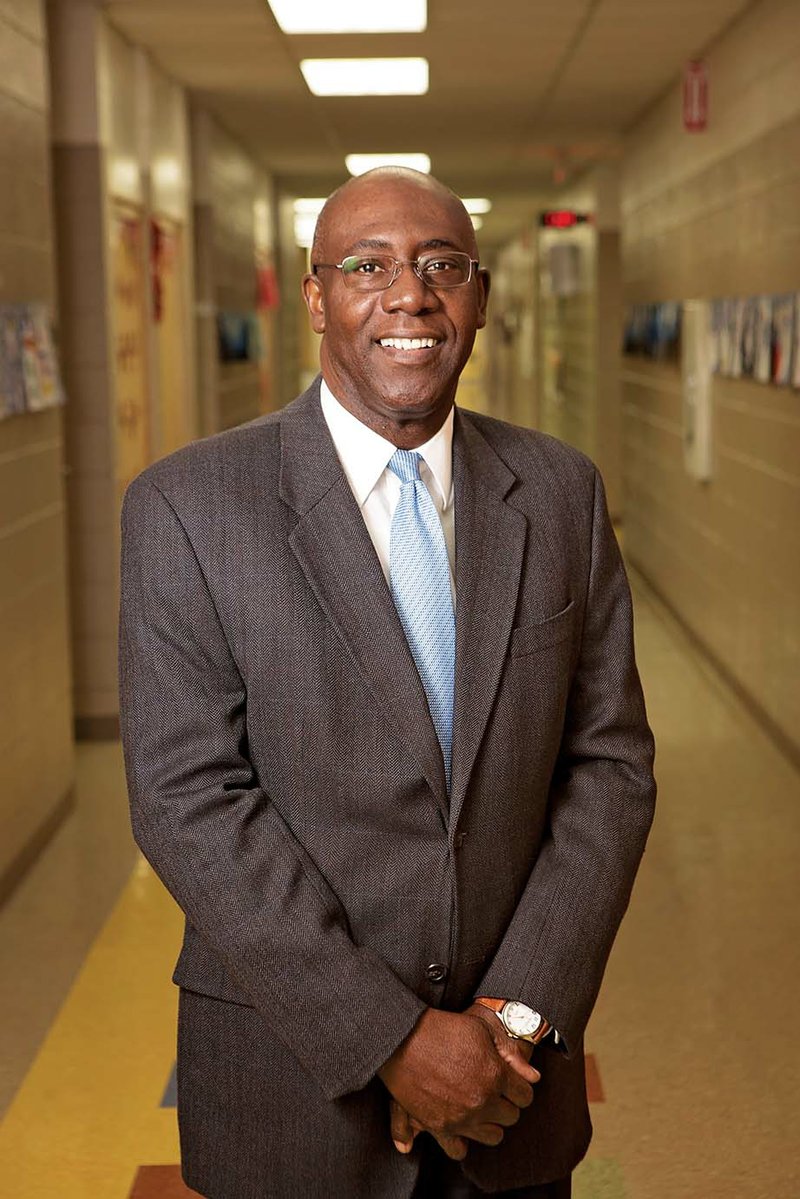 Sam Nelson, 61, became a kindergarten teacher and spent 10 years in the classroom before going into administration. He became principal in 1993 at Florence Mattison Elementary School in Conway, and he plans to retire in June. Nelson said he and his wife, Elois, plan to stay in Conway, but they want to travel the United States.

Sam Nelson is retiring as principal of Florence Mattison Elementary School in Conway, and judging by letters students have written to him, they will remember everything about him, from his good nature to his shiny shoes.

Nelson, 61, who grew up as the son of sharecroppers in the southeast Arkansas town of Dermott, has spent 38 1/2 years in education, 22 of those at Florence Mattison.

“Education will always be dear to my heart,” he said. “It’s certainly been important in my life, coming from what many would consider an impoverished background. It’s been a blessing to me and my family.”

Nelson said his parents worked hard to provide for him and his four siblings. His parents’ influence is why he said he developed a strong work ethic early on.

“I probably worked in any kind of field you want to name — bean, cotton, hay.”

The family was poor, no question, but the sense of community was strong.

“Cousins, aunts, uncles, even people who weren’t relatives stuck together and shared with each other,” he said. He and his two sisters and brother always had food to eat and clean clothes to wear, he said, albeit they were sometimes hand-me-downs.

“What we did have was love for one another,” he said.

As an administrator, Nelson wears a tie to school every day with a perfectly ironed shirt and dress slacks. It’s a matter of respect for the role, he said.

Nelson attended an all-black school until he was in 10th grade, when schools integrated, and he switched from Chicot County High to Dermott High School.

“It was fascinating in that we were together, but we were separate in many ways,” he said. “People hung out with people they were familiar with.” Co-homecoming queens — one black, one white — were elected, for example.

“One of the things I think promoted integration was sports,” he said. “I played basketball a couple of years before I determined I wasn’t NBA material.”

Nelson was the first in his immediate family to go to college, although he said two of his sisters later attended.

“Teachers have always influenced me,” he said. Nelson said he still thinks about Cleo Thomas, his eighth-grade teacher in the Collins Special School District in Baxter, who was the biggest influence in his career.

“I always thought I wanted to be a history teacher — for one reason, Cleo Thomas. I always thought about him a lot as far as work ethic and being honest,” Nelson said. “I thought the world of Mr. Thomas and still do.”

“I guess I was kind of homesick,” he said. He transferred to the University of Arkansas at Monticello, where he graduated with a degree in elementary education. He did his student teaching at Dermott Elementary School and became a kindergarten teacher there.

Although he first thought he wanted to teach fifth- and sixth-graders, he discovered that he liked the younger age group.

“They’re naturally curious, and for the most part, they’re well-behaved,” he said.

Nelson was the only male kindergarten teacher at the small school.

“It was really a unique experience — especially with the boys. I remember at recess playing football and basketball. The boys, I think they really enjoyed that,” he said, adding that it’s important for boys to have a male role model during that time in their lives.

Today, so many students are from divorced families that it’s still important, he said, to have male role models. Florence Mattison has two male kindergarten teachers.

“You really have to love what you’re doing if you’re a teacher,” he said. “I refer to our teachers as an instructional family.”

After Nelson had been in the classroom 10 years, he said, he got the “administrative bug.” He said he thought he could be more effective as an administrator and bring about positive changes.

He spent a couple of years as principal of the former Wabbaseka-Tucker Elementary School, five miles north of Altheimer in Jefferson County. Nelson said he brought “stability and predictability” to the curriculum and “organization and structure in promoting student achievement.” He’s quick to add that it was a collaboration with teachers, “not just me.”

When he was elementary principal, he and his wife, Elois, lived in Dermott, so he stayed in a travel trailer on the school campus and went home on the weekends.

In the smaller districts he’d been in, Nelson said, he had to wear many hats.

“It was really eye-opening to me just in terms of how things worked,” he said. “It was much better [in a larger school]. I could concentrate on being the building leader.”

Nelson’s leadership style is open, he said, and based on a belief that teachers are the experts in the classroom. He trusts them to do their best, but “it’s a two-way street,” he said. When a teacher asks to implement a teaching strategy, Nelson said, he asks if there is research to support it. “As long as they can convince me this has educational merit, I’m going to let them do it.”

Speaking of educational merit, yes, he supports the controversial Common Core. Although it may take a few years, “it’s going to benefit our kids greatly,” he said.

“U.S. education is not an island,” he said. To make sure students can compete globally, he said, “it has to be rigorous.”

Nelson said because most states have adopted the Common Core curriculum, students can travel to almost any school and have educational parity.

“I think we’re on the right path with this, and this is Sam Nelson’s opinion,” he said. “There are some good things; unfortunately, I think there is a lot of misinformation about Common Core.”

He also supports cursive writing being taught in schools, which will be required under a bill the Arkansas Legislature passed this year. Cursive writing has never been officially dropped from the curriculum at Florence Mattison, he said.

“The challenges in education are picking out what we need to learn most. In 6 1/2 hours a day, a lot has to be accomplished,” he said.

If it were up to Nelson, school would be held year-round, with several breaks, “two weeks here, two weeks there.” He said many children regress over the summer, and attending school year-round would make a “tremendous difference.”

Changes are inevitable in education, just as any profession, he said.

“The biggest change in education has been the advance in technology, without a doubt. The advent of the introduction of technology has been absolutely phenomenal,” Nelson said.

Computer skills are essential to compete in a global economy, he said.

“Children, particularly ones I see at Florence Mattison — they’re not afraid of it. When I was first introduced to technology, I was so afraid I was going to push a button and delete something.”

Nelson said he’s still impressed when he sees one of the Florence Mattison students with a Chromebook doing research on a subject.

“School, for some students, represents the best chance for them to succeed later on,” he said.

Nelson said he has tried to serve as a role model for students who might look at him as he did Cleo Thomas. Nelson wants them to see someone who treats them fairly, he said. Nelson also feels a responsibility as an African-American male, he said.

“Going back to the civil rights movement … to me, I owe a debt to those persons who marched and fought. … In part, this is my way to give back. If you have a dream, or you have a purpose, it is accomplishable.

“Being an African-American male, one of the things I find troubling now, the opportunity for education is there — whether you’re African-American or what nationality, you have to grasp that and hold onto it. I’m not sure that’s taught as much now. No matter what nationality the child is, you have to show them that you care for them — as a matter of fact, that you love them.”

School may be the one place where children feel safe and comfortable, Nelson said.

“You may be the only person a student finds solace in,” he said.

Conway Superintendent Greg Murry said Nelson has made a significant impact on the district.

“We are losing a legend in our district,” Murry said. “I will personally miss his wisdom and perspective. Mr. Nelson deserves significant praise for serving well the children of Florence Mattison for 22 years, a length of service that is unheard of in virtually all professions. Mr. Nelson has served with dignity and with heart and will leave a legacy of touching thousands of students throughout his noble career. I wish Sam and Elois the very best as they begin a new chapter in their lives.”

Elois, who has been a paraprofessional in the Conway School District for 22 years, is also retiring.

Nelson, whose contract goes through June, got up from his desk to get something.

“This is what I’m going to cherish and take with me,” he said, spreading out laminated handwritten letters from students. “It does something to me in terms of how that child felt, or how I positively impacted that child.”

His soft-spoken personality apparently made an impact. The students’ comments included, “Thanks for not yelling at me.” “Thanks for not yelling at us, and I aprisheat that,” another student wrote. “Thanks for the new bathroom and for caring. You keep us safe and spen money on us.” “Thank you for the things you had done for us like the Smart Board.” “I like your shoes; they are so shine and clen.” “When you come to school, you dress so professionally. I know you love each of us and we all love you!”

Nelson said that as much as he still enjoys coming to work every day, it’s time to do other things. He wants to explore the United States with his wife. Spend more time with his granddaughter. Work on his

El Camino. Go to the Talladega 500 race in Alabama.

Picturing Nelson at a Talladega race isn’t easy. He won’t be wearing a tie, though.

“I’ll be dressed a little more relaxed. Jeans and maybe a T-shirt, or something like that,” he said, smiling.