State payments to legislators up 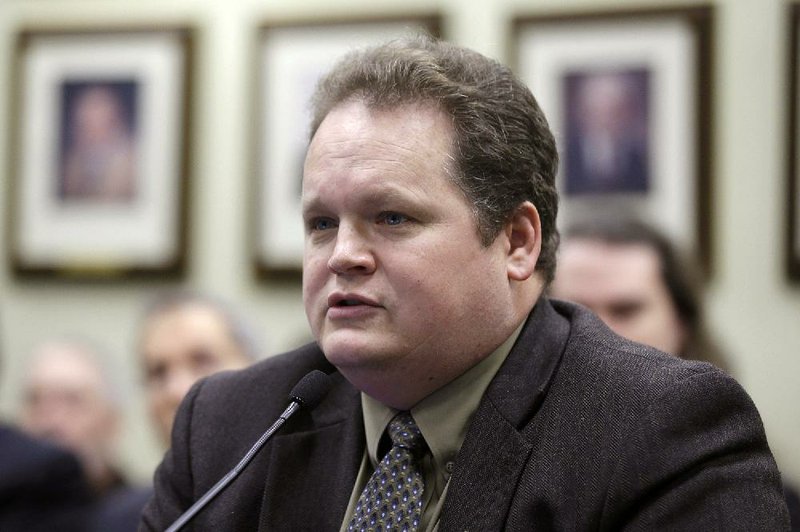 Rep. Nate Bell, R-Mena, presents his bill dealing with rights of public employees during a meeting of the House Committee on State Agencies and Governmental Affairs at the Arkansas state Capitol in Little Rock, Ark., Wednesday, Feb. 4, 2015. The bill advanced through the committee. (AP Photo/Danny Johnston) 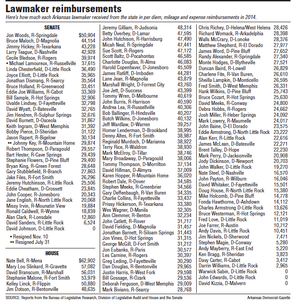 Those expenses totaled $4.02 million last year when the Legislature met in a 38-day fiscal session early in the year and a three-day special session in the summer -- up from $3.83 million in 2012 when the General Assembly convened in a 26-day fiscal session, according to the latest state records.

The payments in 2014 fell below the $4.87 million paid out in 2010 when lawmakers convened for their first-ever fiscal session, which lasted 25 days.

The expenses dropped sharply in 2012 from 2010 largely because of a reduction in office-related expenses paid to lawmakers after the April 2012 settlement of a lawsuit that challenged the Legislature's system of reimbursing lawmakers for expenses.

Per diem (a daily allowance for lodging, meals and incidentals), mileage and other payments are in addition to legislators' $15,869 annual salaries. (The House speaker and Senate president pro tempore each get $17,771.) A citizens commission -- authorized under Amendment 94 to the Arkansas Constitution -- has proposed substantial increases in annual pay for state lawmakers, while recommending that lawmakers end certain expense payments.

"Obviously I live quite a ways from the Capitol, and I am here most of the time," Bell said.

"Everybody literally unanimously in every one of the town hall meetings said, 'We understand that, and we want you in Little Rock,'" said Bell, who was appointed in January by House Speaker Jeremy Gillam, R-Judsonia, to be chairman of the House State Agencies and Governmental Affairs Committee.

"I believe that it is my job to represent the people, and I do that most effectively when their business is being conducted here by being here," he said.

Bell, who is a cattle and poultry grower, a bail bondsman and a construction consultant, said his "personal income over the time that I have been in the Legislature has averaged $40,000 a year lower than it was prior to my Legislature service.

"That's why I am actually leaving the Legislature at the end of this term is because specifically I can't handle it financially," he said. "There is certainly no one getting rich on legislative service unless they are doing something underhanded, and I am certainly not doing that."

About $10,160 of Bell's expenses were incurred in 2013 but submitted in 2014, a factor that drove up his totals. He also attended a Council of State Governments conference in Alaska in August; an American Legislative Exchange Council meeting in Kansas City in May; and a meeting in Washington, D.C., in December at a cost of about $5,400 to the state.

Bell said he attended those conferences partly because of his interest in energy and environmental issues, and partly to help him prepare to be state chairman for the American Legislative Exchange Council.

Usually, lawmakers who draw the most attend more meetings, live farther from Little Rock and go to more out-of-state conferences.

Branscum and Linck said they attended more legislative meetings last year than in previous years to help them prepare to be co-chairman of the Arkansas Legislative Council and chairman of the House Public Health Welfare and Labor Committee, respectively.

Woods said his legislative expenses show that he spent a lot of time in Little Rock last year preparing complex bills -- including ones on personal identity rights, a child abuse registry, drug courts and ethics -- in preparation for this year's regular session. He said he was able to do that, partly because he wasn't up for re-election last year.

Woods said the payments that he receives from the state for expenses are "more of a break-even" situation and that any money he receives above his expenses goes to pay for things such as his car expenses or new tires.

"It's not a get-ahead environment. You make enough to make it work," he said.

Last year, he attended the Council of State Governments conference in Alaska in August and the National Conference of State Legislatures at San Diego in June at a total cost of about $4,300.

Woods said he's a full-time state legislator. He said he draws royalties through iTunes based on the work of his band, A Good Fight, and works part time at his business-consulting company.

"It's hard to hold down a private-sector job and be in the Legislature unless you are independently wealthy, or older and retired," said Woods, who formerly worked for Arvest Bank.

As it has done for several years, the Arkansas Democrat-Gazette reviewed records provided by the Bureau of Legislative Research, the Legislative Audit Division, the House of Representatives and the Senate to calculate the amounts of the state expenses payments to lawmakers.

Legislators who live within 50 miles of the state Capitol are paid $61 per day and for mileage for attending meetings in Little Rock.

Last year, lawmakers were reimbursed for mileage at a rate of 56 cents per mile, Davis said. The mileage rate increased to 57.5 cents per mile on Jan. 1.

Lawmakers usually have more expenses in odd-numbered years, when the Legislature meets in regular session. Generally, the longer the session, the higher the costs. In 2008, voters amended the state constitution to provide for fiscal sessions in even-numbered years.

Along with state Rep. Warwick Sabin, D-Little Rock, Woods proposed a constitutional amendment that voters approved in November that is now known as Amendment 94.

The amendment increased the amount of years that lawmakers can serve in the state House, Senate or in both chambers, barred lawmakers from accepting certain gifts such as meals in one-on-one meetings with lobbyists, and created a citizens commission to set elected state officials' salaries.

The resulting Independent Citizens Commission -- whose members were appointed in December by the governor, chief justice and legislative leaders -- has proposed raising the annual salaries of state lawmakers from $15,869 to $39,400. Pay for the House speaker and Senate president pro tempore would increase from $17,771 to $45,000.

The commission also is recommending that the Legislature eliminate office-related expense reimbursements of up to $14,400 a year that lawmakers are eligible to collect under state law. More information about the commission's recommendations is available at www.citizenscommission.ar.gov.

A public hearing on the proposed salary increases is to be held Monday at 10 a.m. in the University of Arkansas Administrative Office at 2404 N. University Ave. in Little Rock.

Representatives' total salaries would increase from $1.58 million to $3.94 million a year, and office reimbursements of $1.16 million a year -- based on a three-year average -- would be eliminated.

Bell said the salary commission's proposals wouldn't affect him much.

"If you take into account the tax implications, what you are doing ... is you are taking a reimbursable expense and turning that into income. For most of us, that actually makes the net out of that exchange maybe a $2,000 or $2,500 raise at best," he said.

Bell said he pays Liberty Strategies LLC of Mena -- a company sold by his wife to a longtime family friend Tina Lehman last year -- for various office-related expenses. For instance, he paid the company $1,142 in December for "social media monitoring/maintenance, local news monitoring/events, mail processing, phone calls/messaging/emails and thank you notes," according to House records.

"You are not dealing with a situation where you can just hire anybody off the street to go do this. If you do, you run the risk of not only political exposure in ways you may not want, but you also run the risk of someone's sensitive information, somebody's identity, something that people would be very embarrassed by being out in public [being released]," he said.

"From my personal standpoint and my personal tax situation, in all likelihood, it's such a minor change that it really makes no difference at the end of the year what happens with it. It is about a net neutral for me," he said.

But Woods said the commission's proposals "would be better for me."

He said he has office-related expenses of about $1,400 a month, including $500 a month each for his administrative assistants Elizabeth Moore and Stephanie Vaughn, and $400 a month for office space from Mountainback LLC.

"Not a dime comes back to me either directly or indirectly or to a family member," Woods said.

A $39,400 annual salary "will help" offset his expenses, such as $5,400 a year that he pays for rent to the secretary of state for an apartment in the state-owned Capitol Hill Apartments, he said.