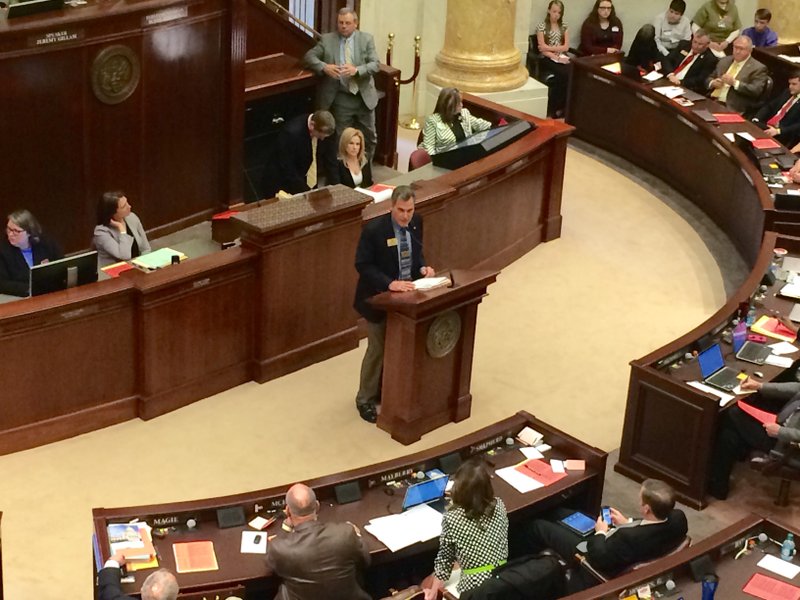 Rep. Charlie Collins, R-Fayetteville, presents House Bill 1077 that will now head to the Senate for approval.

A bill that would allow public college faculty and staff members with concealed-carry permits to carry weapons on campus was approved by the state House of Representatives on Monday.

Several representatives spoke against the bill, citing concerns about taking away local control from colleges and universities.

"I love guns, but are we for local control?" Rep. Mark D. McElroy, D-Tillar, asked. "We say we are until we're not. These colleges have pleaded with us, just let us tend to our own affairs.

Rep. Kim Hendren, R-Gravette, said he thought legislatures should leave the law as it is, where colleges and universities can now opt to allow faculty and staff with concealed-carry permits to have weapons on campus, and voiced concern about where this bill would lead.

"Is the next step from this to [allowing weapons in] the public schools in the state of Arkansas?" Hendren asked. "I hope not."

Rep. Bob Ballinger, R-Hindsville, was the only one to speak in favor of the bill.

"There's a bit of a culture that has permeated higher education, where they treat a gun like a rattle snake," Ballinger said. "Frankly, some people in higher education need an education to realize [a gun is] just a tool."

The bill failed once in a House committee and passed after being amended to include that universities and colleges could require faculty and staff with concealed-carry permits to complete active shooter training, as well as ban weapons in daycares on campus.