Ex-Hogs show out for scouts 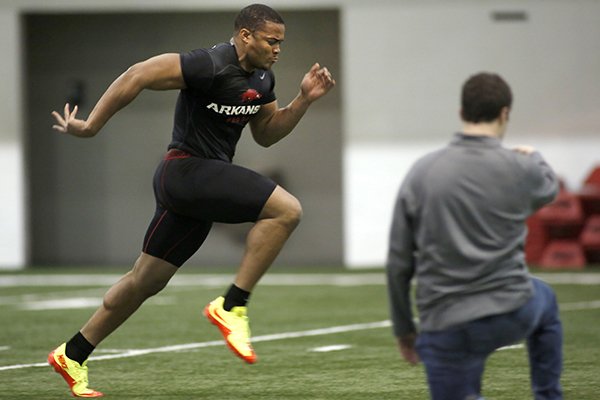 FAYETTEVILLE -- There was no shortage of highlights Wednesday during Arkansas' annual pro day at the Walker Pavilion.

Defensive players Trey Flowers and Martrell Spaight improved upon their test scores at the NFL scouting combine, tight end AJ Derby showed where he's at as he prepares for foot surgery, offensive lineman Brey Cook turned in an impressive display of strength on the bench press and cornerback Tevin Mitchel ran a blazing time in the 40-yard dash.

Mitchel ran somewhere between a 4.38 and a 4.41 based on the hand-timed clocking of the scouts.

Arkansas Coach Bret Bielema said Mitchel's fast 40 didn't come as a surprise and that he's been on an upward trajectory after struggling during his junior season.

"It's kind of like the scouting process never ever caught up to it because they're so locked in on guys before the season," Bielema said. "So it's a guy like him that had an outstanding senior year, comes here and throws out a really good time, has a really good performance, and literally your stock can change overnight."

Mitchel also is believed to have had the second-best best broad jump at 10 feet, 2 inches, behind receiver Demetrius Wilson's 10-4.

The University of Arkansas did not release any of the testing data from pro day.

Derby was unable to run or do on-field drills at the NFL combine in Indianapolis after medical testing showed he had a hairline fracture in his foot. He's scheduled to have surgery to insert a screw in his foot Friday, followed by a six-week rehab regimen.

A tight end for one season after playing quarterback as a junior, Derby was timed in the high 4.6s and low 4.7s in his two 40-yard sprints, Bielema said.

"It felt good to actually get out there and not get held out like what happened at the combine," Derby said. "I went back and forth with my agent trying to decide if I was going to get surgery before this or after it, but I know a lot of people wanted to see me move around, see if my knee was healthy and everything, so it was pretty important."

Derby said he is being represented by Neil Cornrich, who also is the agent for Bielema and Flowers.

Spaight and Derby did a little extra work with a scout from the Philadelphia Eagles to conclude the workout.

"A lot of my numbers were way better than what I did at the combine, so I'm pleased with that," Spaight said.

Spaight said he dropped his 40 time from the combine and that his other drills and position work went better than expected.

Flowers improved on his 4.93 time in the 40 from the combine, saying he was told he was around 4.8

"I feel like I definitely improved on my 40 and my three-cone drill, and I just broke even with my vertical jump," Flowers said.

Flowers did position drill work as a defensive lineman with Philon and Tenarius Wright, the 2012 senior who is now a strength and conditioning assistant, and did skills work with linebackers Spaight, Daunte Carr and Braylon Mitchell.

"It was just to show that I'm more versatile and I'm able to move my hips," Flowers said. "It's good for me to get the experience and to show the scouts I can drop back as well."

Cook led the way on the bench press with 32 repetitions with the 225-pound barbell, while Wright had 24, fullback Patrick Arinze had 23 and Carr had 22.