Cabot twins push each other to new heights 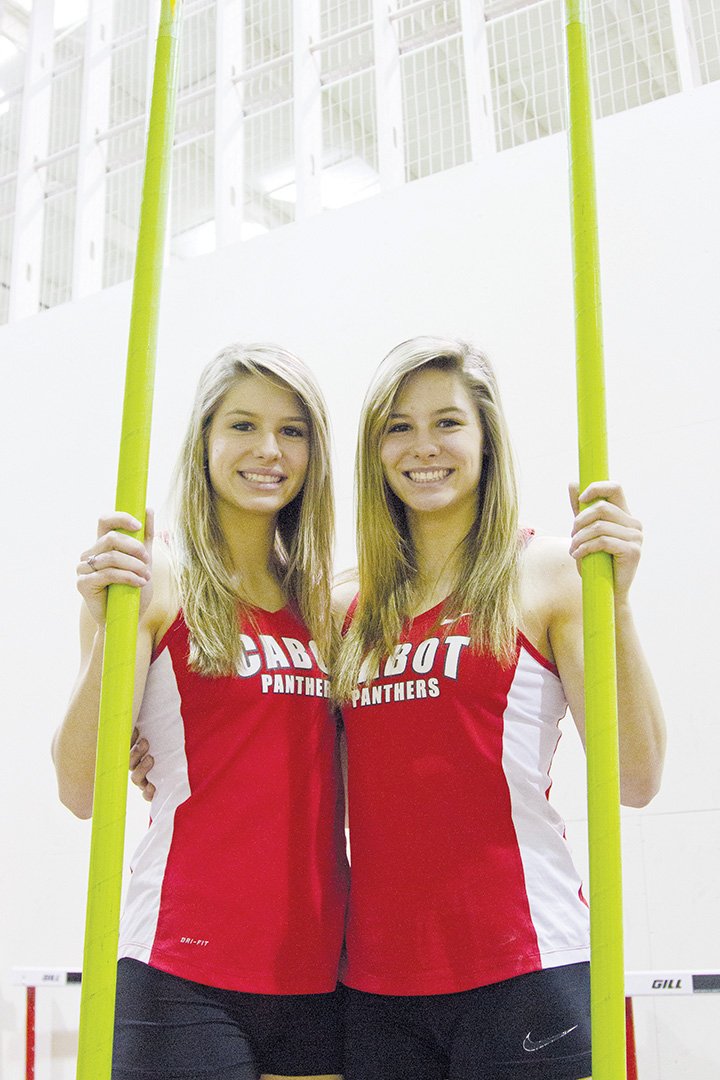 Being a twin can mean having a lifelong friend and source of encouragement. Two Cabot twins have continuously leaned on each other for such sisterly support as they have shattered records and vaulted toward excellence in their sports, education and everyday lives.

Lexi and Tori Weeks are seniors at Cabot High School, and it is obvious to the people around them how close they are to one another. The two are identical in both looks and interests, and it seems like they stay on the same train of thought as they often provide uniform answers in what sounds like surround sound.

“Jinx,” Tori said after she and Lexi said the same thing at the same time.

Do they do that a lot?

“We do,” they answered in unison, which led to a fit of laughter.

The two have been involved in a variety of sports throughout their lives, and they have been pole vaulting for five years. Lexi recently broke the national indoor record for high school pole vaulting by clearing 14 feet, 3 1/4 inches. Tori was the first to reach her with a hug and congratulations.

“We’re always encouraging,” Tori said of the sisters’ relationship. “When she wins, I’m always excited for her, and she’s always excited for me when I do well. It’s good to have that person always pushing you but also being able to encourage you as well.”

Lexi agreed, saying that encouragement goes back and forth between the twins as they continue to excel.

“Whenever we do [personal record vaults] or when I broke the national record, Tori came and tackled me in the pit,” she said. “When we PR, we usually go and tackle each other in the pit or are the first one there to hug each other. It’s really cool to have that person there for you.”

This built-in camaraderie is unique compared to other athletes. Others may have teammates, coaches and family members on the sidelines, but the twins are able to go the distance with each other.

“A lot of people that are breaking national records are the only ones up there,” Tori said. “When they go to meets, they’re usually the only ones jumping that high, so they never really have anyone there. We’re both jumping the same heights, so we’re both there for each other.”

The previous indoor record was set less than a year ago at 14 feet, 2 3/4 inches by Desiree Freier of Justin, Texas. Lexi set the new record at the Arkansas Vault Club in Black Springs, where the twins attend meets and receive coaching from Morry Sanders.

At the beginning of this season, both Tori and Lexi cleared 14 feet, 1/2 inch, so they knew the goal to beat the record was in sight. Feb. 21 marked their fifth attempt to break the record, and Lexi cleared the bar 1 centimeter above Freier’s previous record.

Lexi and Tori started pole vaulting in the seventh grade when the track coach at the junior high school encouraged them to go to the high school to learn the sport at the indoor pole-vaulting pit.

“In seventh grade, after volleyball season, a lot of the girls do track,” Lexi said. “We started doing all the events we were interested in, and we were the only girls from the junior high doing pole vaulting. In the seventh-grade year, we placed second and third in the ninth-grade conference, so we just realized we had a knack for it.”

The next year, with encouragement from their grandfather, the twins started going to Sanders’ facility for extra coaching.

Launching over the bar provides a rush like no other, the girls said.

“Clearing the bar gives me a rush. It gets me excited,” Tori said. “It’s the best feeling ever, especially when you clear a height that you’ve been trying to clear for so long.”

The outdoor and indoor pole-vaulting records are different, and Tori said she and her sister still have a chance to break the outdoor national record of 14 feet, 7 1/4 inches when the season starts in a couple of weeks. They also have some indoor meets planned for later on in the year.

“I guess I’ll have that chance to beat Lexi’s record,” Tori said.