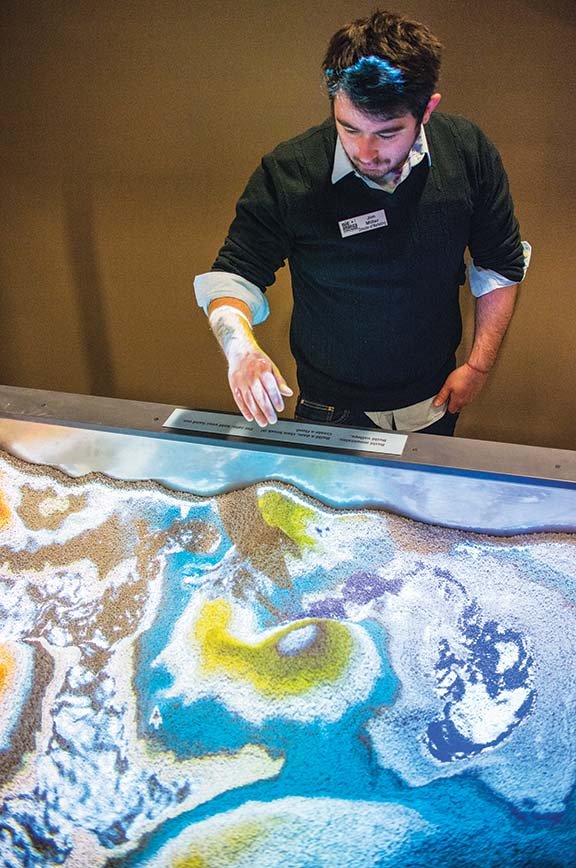 Jim Miller, director of marketing for the Mid-America Science Museum in Hot Springs, holds his hand over an interactive display that allows a person to change the terrain by moving land and water shown on the display, which is intended to illustrate how water changes course when the land is changed.

It’s a brand new day at the Mid-America Science Museum. Closed since Aug. 11 for renovations, the museum opened its doors Saturday, offering more than 60 exhibits, displays and experiment stations to visitors of all ages. Jim Miller, director of marketing for the museum, said several “pre-opening” events have been held, and among the first reactions to the renovated museum have been the exclamations “wow” and “cool.”

“Those are exactly the reactions we expected,” said Diane LaFollette, executive director of the museum. “Through the generosity of the Donald W. Reynolds Foundation and other donors, we’ve been able to do some very imaginative things here that are not available anywhere else in this part of the United States.”

Other major donors to the renovation project include the Oaklawn Foundation and the Advertising and Promotion Commission of Hot Springs.

Miller said that by working in partnership with Global Studios at the Exploratorium in San Francisco, the Mid-America Science Museum staff has developed 12 exhibits that are totally unique to the Hot Springs museum, along with another 21 displays new to Mid-America.

“You won’t find these anywhere else in the country,” Miller told visitors during a recent preview tour of the museum. “We are a ‘test run’ for some of these new exhibits. They are interested in seeing what the response will be.”

Niles Ellis is the longest-term employee at the museum.

“The museum opened in May (1979), and I came here in August,” said Ellis, who is director of exhibits and design. “This is incredible,” Ellis said of the renovated museum. “I’ve been waiting 35 years for this. It’s all bright and shiny once again. I get to experience it all over again.”

“We couldn’t be happier with the ‘new’ museum …,” said Lance Garner, chairman of the museum’s board of directors. “It exceeds our expectations, and we know that it is going to become a major tourist draw and education center for the state of Arkansas.”

Miller said the Oaklawn Foundation Digital Dome Theater, which can seat up to 50 people, “may be the highlight of the new design.

“It uses NASA satellite technology. It is state-of-the art.”

Miller said two programs are currently showing in the dome theater — Two Pieces of Glass: The Amazing Telescope and Back to the Moon for Good.

Miller said Shena Ball, director of education for the museum, believes visits to the Digital Dome “may produce a few astronomers and possibly encourage students to become astronauts.”

Another main feature of the renovated museum is the addition of the Bob Wheeler Science Skywalk, which, Miller said, literally takes the visitor’s experience into the canopy of the surrounding forest. The city’s A&P Commission sponsors the skywalk, which is named for the late Wheeler, who was a “mover and shaker” in Hot Springs, Miller said.

“Here we are backed up to Hot Springs National Park. You walk out of the museum building and into nature,” Miller said. “It lights up at night and is the perfect place for special occasions. We already have our first wedding booked here in April.”

At the end of the skywalk, which is built 32 feet above ground, is a short swinging bridge made of rope and a net into which kids can jump.

“The skywalk ties the outdoors to the museum,” Miller said.

When visitors enter the museum, they will immediately notice other changes.

“We have completely transformed the lobby area,” Miller said. An elevator has been installed near the admissions area for easier access to the museum’s lower level.

The museum’s gift shop remains in the lobby but has received a new look.

“Jamie Perisho, our guest services associate, did a really great job in setting up the gift shop, along with Noreen Bonner, our chief operating officer,” Miller said.

New and refurbished hands-on exhibits abound on both floors of the museum.

The first gallery near the entrance is the Marvelous Motion Gallery, which introduces visitors to the basic concepts of physics. Here are exhibits like the Bicycle Rope Squirter (aka, the Loopy Lasso) and the Peanut Fountain. There is also a collection of photographs by the late Berenice Abbott, whose work was often published in scientific publications during the 1950s.

Once downstairs, visitors will be drawn to the Arkansas Underfoot exhibit, which features all things Arkansas, including a large tree with a reading nook in its hollow trunk and a geology wall that highlights the various geological regions of the state.

Here, too, is the familiar mastodon that once greeted visitors to the museum. The fossilized mastodon is a replica of one that roamed the Ozark Mountains 18,000 years ago.

Other new exhibits on the lower level include the Rain and Terrain station, where with a movement of hands, visitors can “create” rain onto the “terrain,” building rivers, dams and mountains. Another hands-on exhibit is the microfossil sorting station, where visitors can classify items such as rocks and shells.

An “animation station” is also located on the lower level, where visitors can watch videos and even create their own.

“We have primarily brought the museum into the 21st century,” Miller said. “We are teaching kids with technology that they already are using.”

Along with new exhibits, the museum has some new faces, including Miller and Irene Perros, who is the volunteer coordinator.

Miller grew up in Caddo Gap near Glenwood and visited the museum many times as a young boy. He has a degree in journalism from Henderson State University in Arkadelphia.

Perros has eight years of experience working with local nonprofit organizations, including Low Key Arts, which organizes the Valley of the Vapors Independent Music Festival.

Miller said the museum, which is a Smithsonian Affiliate, depends heavily on grants, donations and volunteers. “We are a private 501(c)(3) nonprofit organization,” he said.

“We depend on volunteers to help with special events and also our day-to-day management of the museum. We also depend on our members. It is time for our existing members to renew their membership, and we are hoping to secure new members as we begin a new season.”

Miller said the museum also depends on support of the local schools that bring their students to the museum on field trips. The museum offers summer camps for students as well.