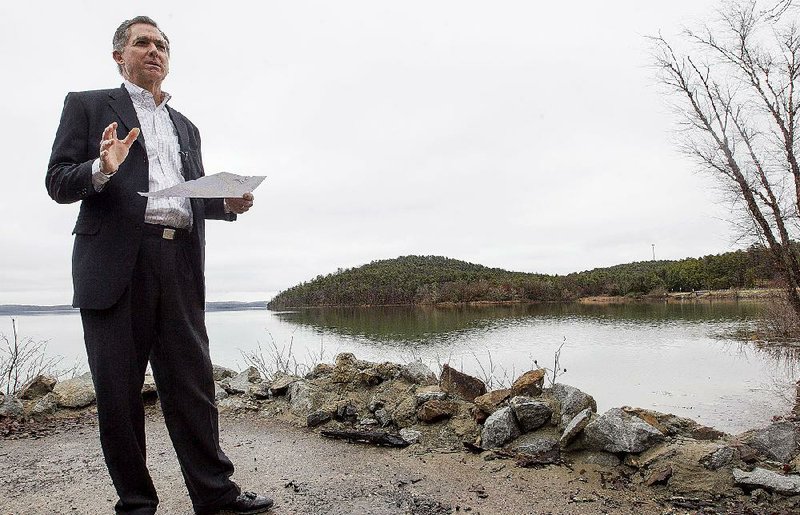 Correction: Exxon Mobil has said a laboratory determined manufacturing defects, specifically hook cracks near the seam, caused the Pegasus pipeline to rupture in a Mayflower neighborhood in March 2013. The company also has said it could not determine what sped the cracks’ growth, causing the line to rupture when it did. “The degradation mechanism of the hook crack defect to failure was undetermined,” Exxon Mobil wrote in a remedial work plan in March 2014. This article incorrectly summarized the company’s reported findings.

U.S. Rep. French Hill said Tuesday that he wasn't ready to take a position on whether to restart the Exxon Mobil pipeline that ruptured two years ago this month or move it out of the watershed of central Arkansas' largest drinking-water supply. 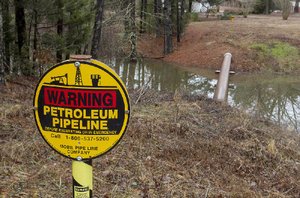 Photo by Benjamin Krain
An exposed section of Exxon Mobil’s Pegasus pipeline that runs through about 13 miles of the Lake Maumelle watershed is among the concerns Central Arkansas Water officials presented to U.S. Rep. French Hill on Tuesday.

His Republican predecessor, former Rep. Tim Griffin, had favored moving the pipeline out of the watershed.

It was Hill's first meeting with Central Arkansas Water about the Pegasus pipeline, which spilled 210,000 gallons of heavy crude into a Mayflower subdivision March 29, 2013.

While utility officials want the pipeline -- which has been shut down since the spill -- to close for good or to be moved out of the watershed, Hill said he wasn't ready to form an opinion.

Hill noted that some results of tests that Exxon Mobil is conducting on the pipeline are not yet known and that he foremost supports what's best for central Arkansas' water supply.

"I don't come at it with a preconceived notion other than that," he said.

Hill said Tuesday's tour gave him a good grounding on the pipeline issue as it relates to the watershed.

"As long as the pipe is in the watershed ... there's still some risk," Central Arkansas Water spokesman John Tynan said.

The Pegasus pipeline dates back to the late 1940s and runs through about 13 miles of the watershed.

Griffin, now lieutenant governor, said in late 2013 in a letter to the federal Pipeline and Hazardous Materials Safety Administration that he opposed restarting the pipeline until it was moved out of the watershed.

State and local governments cannot order the pipeline removed from the watershed, although several Pulaski County officials have expressed support for its removal.

Tynan said it would likely be about a year before the results of various tests on the pipeline would be known.

Additionally, the utility has concerns about the design of the hydrostatic testing being conducted by the company and the age of the pipe.

The utility has requested interagency status for inspecting the pipeline from the Pipeline and Hazardous Materials Safety Administration, as well as Exxon Mobil's complete remedial work-plan proposal from the agency. It has not received responses to either request.

Exxon Mobil identified long-existing hook-cracks and irregular pipe properties as contributing factors in the 2013 rupture, but it has not identified an official cause.

Exxon Mobil restarted the southern portion of the pipeline from Corsicana, Texas, to Beaumont, Texas, in July 2014.

Tynan said a decision on restarting the Pegasus pipeline would be far off, considering the amount of time needed for Exxon Mobil to study the pipeline.

Hill said he was glad the pipeline's fate wouldn't be decided without the testing.

"What I'm comforted by is we're not facing an imminent decision," he said.