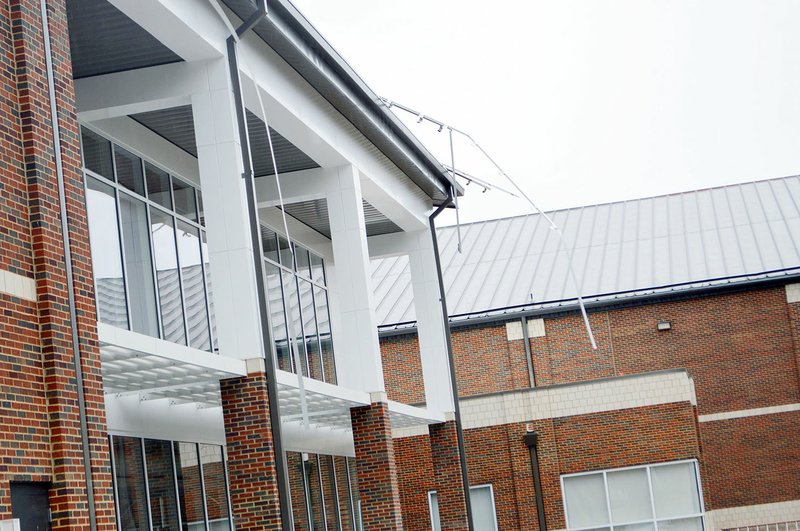 Snow-and-ice guards dangle last week on a new portion of the Health Physical Education and Recreation Center at the University of Central Arkansas in Conway. The guards, which are clamped to the roof, came off because of the weight of precipitation, said Vernon Daves, UCA’s construction manager for the project. The Cone Group is responsible for repairing and restoring the guards, Daves said. Aaron Mitchell of Little Rock, assistant construction manager for the project for The Cone Group, said Monday that the roof has been too slick for an employee to climb on it.

CONWAY — As the ice and snow melted last week, pieces on the roof of the newly renovated and expanded University of Central Arkansas Health Physical Education and Recreation Center slid off, too.

The HPER, as it’s called, underwent a $15 million renovation and addition by The Cone Group of Little Rock and held its grand opening in November.

Three ice-and-snow guards on the south side of the building, which is new construction, came unattached from the roof after last week’s round of snow and ice, said Velton Daves, associate director of the UCA Physical Plant. He said he noticed the damage Friday.

“They are coming off because the weight of the ice was more than they could handle,” Daves said. “The ones on the back of the house are new; the older ones didn’t come down at all.”

Daves, construction manager for the HPER project, said he isn’t certain how many ice-and-snow guards are on the roof of the facility, which was built in 2000.

He said the guards are “a two-piece system — the depth of it, they cut [the ice] in half; then at the bottom, they’ve got a little diamond shape, and that cuts it in half in the horizontal — in the other direction.”

Dave Dennis, director of campus recreation, said the purpose of the guards is to prevent ice and snow from falling “in big clumps.”

“This snow was so bad on the existing building, on the west side — this wasn’t just snow, this was a lot of ice – the snow guards are OK, but the gutters themselves bent because the weight of the snow-slash-ice was so heavy,” Dennis said. “That never happened before. This building was built in 2000, and that’s never happened before. What’s falling off is the new construction. This whole south side — I’m looking at it right now — it’s either hanging or falling,” he said, referring to the guards.

Dennis and Daves said The Cone Group has financial responsibility for the repairs.

“Every new building you get, you get a one-year warranty, so this is a warranty issue,” Dennis said. “We didn’t have any leaks, which is very good.”

Daves said the roof is solid. “There is nothing wrong with the roof. … It’s a stand-and-seam roof; it should last for years,” he said.

The Cone Group subcontractors will reattach the guards when weather permits, Daves said.

“They didn’t say when,” he said. “They’ll have to have a man lift on the back of the building to get up there and work on it. Of course, the ground is so muddy now, it may be a couple of days before they can get something on it.”

Aaron Mitchell of The Cone Group, assistant project manager for the UCA project, said Monday that he hasn’t inspected the damage. He also said the rainy weather has prevented the roofer from reattaching the guards.

“With all the rain, it’s dangerous for him to get up there,” Mitchell said.

“Chances are, just the weight of [the ice and snow] has pulled it off,” Mitchell said of the guards. “It’s effective material, but sometimes with the amount of ice and snow we get, if there is a weakness, or even if not, it’ll create one.”

However, Mitchell said the roofer previously “fixed some of the old [guards] that were coming off,” which may have prevented those guards from falling.

“We see this a lot; we see problems a lot where gutters will get ripped off when people don’t buy [guards],” Mitchell said.

The guards are “clamped on,” he said. “It is something that is attached afterward — it doesn’t penetrate the roof.”

Dennis said students and staff aren’t at risk because the guards fell at the back of the building, which isn’t used as an access.

“There’s no risk involved at all; there should be no students out there at all,” he said. “This doesn’t affect our operations.”

The idea for the HPER expansion came from the Student Government Association in 2010, and students researched the concept and presented it to Dennis. The project is being funded by an increase in the HPER fee. Students pay $9.12 per credit hour to fund the facility.