Cinderella and her slippers.

It might be easy to deride Disney for once again playing the Cinderella card, especially so soon after the meta-musical Into the Woods. But let's be thankful the people commissioned to retell the fairy tale didn't treat it as a moldy relic. 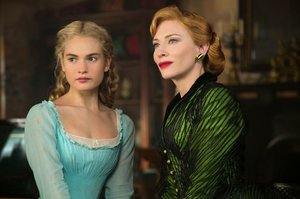 Cinderella (Lily James) must put up with her wicked stepmother (Cate Blanchett) in Kenneth Branagh’s live-action re-make of the fairy tale. 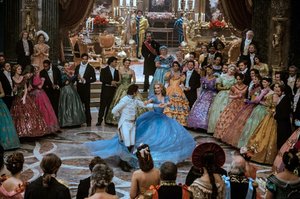 Cinderella (Lily James) and her prince (Richard Madden) take a pre-midnight twirl around the ballroom in Kenneth Branagh’s Cinderella.

Screenwriter Chris Weitz (who's partially responsible for American Pie and About a Boy) and director Kenneth Branagh manage to follow the story's template without ever giving off the stench of indifference. Branagh approaches the Grimm Brothers folklore with the same depth and panache of his better Shakespeare adaptations. If the effort seems wasted, think again. Kurt Vonnegut Jr. used Cinderella as a way to explain story structure and found plenty of room for wry observations as he recounted it.

Branagh, who demonstrated a flair for special effects with Thor, delivers the requisite eye candy. What makes this adaptation worthy of Uncle Walt's breathtaking 1950 animated version is that while he and Weitz follow the familiar tropes closely, they constantly stop to ask "Why?"

In this version of the story, the wicked stepmother (Cate Blanchett) now has a reason for resenting the warmhearted Ella (Lily James, Downton Abbey). Having married the girl's merchant father (Ben Chaplin) for the money he makes as workaholic, she resents how close the two of them are.

Quickly exhausting his earnings with his expensive and occasionally gaudy tastes, she can't afford the household staff when he literally toils to death. She tricks Cinderella into taking over the chores as a way of eliminating the younger woman's grief.

In many previous productions of Cinderella, the stepmother is merely cruel, and her daughters (Sophie McShera and Holiday Grainger) are ghoulish. Branagh instead makes Blanchett elegant but insincere, and gifted costume designer Sandy Powell decks out the shallow, selfish stepsisters in colorfully garish gowns instead of merely trying to make them ugly.

James is suitably plebeian, but she projects a warmth that makes it easy to see why the animals love her enough to help her get to the prince's ball when her stepmother forbids it. The mice don't talk or behave anthropomorphically until the delightfully goofy Fairy Godmother (who else but Helena Bonham Carter?) shows up.

Nonetheless, it's understandable why they and the other critters return Ella's kindness even after the other people in the house dub her "Cinderella" because she's always covered in soot.

Branagh and Weitz's consistent efforts to put some psychological heft into the story makes it easier for grown-ups to enjoy the film. Fortunately, the director also seems to love all the stuff kids will enjoy in the film. The simulated and real animals are remarkably expressive and steal the show, even when they aren't transformed into coachmen.

The filmmakers wait until the end of the second act to lay out the spectacle, and the kingdom's palace and surroundings are suitably impressive. Branagh understands that special effects aren't so special if they clutter the movie and slow down the narrative.

For all the sophistication Branagh imbues into the story, he reminds kids and their parents of a simple fact. Having consideration for others is what's best for royals and the common folk.

Unlike the prince in previous versions of the tale, this budding monarch (Richard Madden) falls for more than just Ella's taste in slippers. The lad actually wants to do right by his office and his heart, so Ella is due for more than nicer living quarters if she wins his hand.

Disney precedes Cinderella with Frozen Fever, a seven-minute short that answers a few questions about what happened after Elsa (Idina Menzel) and Anna (Kristen Bell) reconciled at the end of Frozen. Being a snow queen, Elsa can't admit she has caught a nasty cold even though adorable little snowmen appear every time she sneezes. The little frozen people are awfully cute, but the short lacks the power of the original Frozen or the inspired live action movie that follows it.