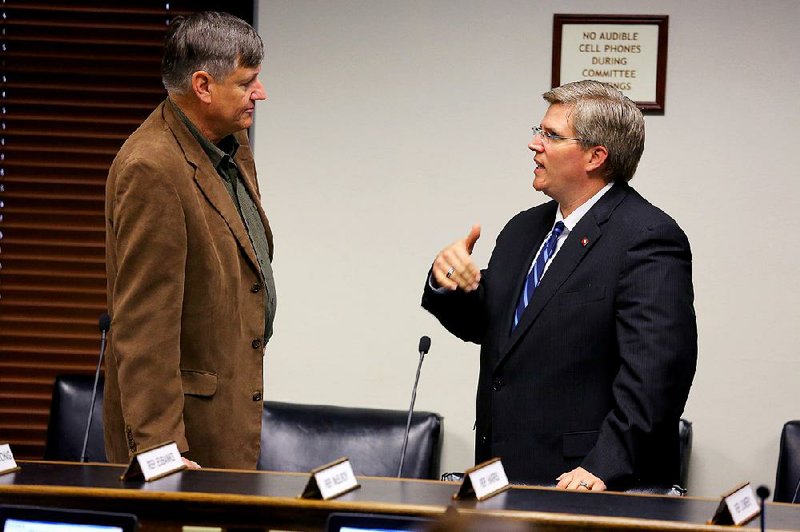 Before "re-homing" his two adopted daughters to a man who later sexually assaulted one of them, a state legislator and his wife were accused of using parenting techniques, such as isolation and corporal punishment, that are prohibited by state adoption officials, according to court documents.

In a state police interview with one of the girls -- age 3 at the time of the interview -- the girl said that Rep. Justin Harris, R-West Fork, and his wife, Marsha, had spanked her. And a former family baby sitter said the Harrises kept the older girl, about age 6, locked in a bedroom for hours at a time using surveillance cameras to monitor her.

The two girls, who Harris said came to the family so damaged that life with them became intolerable, were thought by the Harris family to be possessed by demons, according to Chelsey Goldsborough, the former baby sitter.

The belief that the girls had been overtaken by demons led the Harris family to contact religious experts to perform an exorcism, Goldsborough said.

Harris declined an interview request from the Arkansas Democrat-Gazette on Wednesday and Thursday.

But in a text message late Thursday, he denied all of the assertions, saying that he and his wife are award-winning child-care professionals and that they follow Department of Human Services guidelines on child discipline.

"We do not use corporal punishment with our children," Harris texted. "Children with [special needs] ... take special techniques."

Harris also rejected accusations that he and his wife participated in an exorcism involving their former adopted daughters and suggested that the baby sitter's comments were the result of a falling out between him and Goldsborough.

"After babysitting a few times she was told she could no longer care for the children after one of the children reported that she was instructed by [Goldsborough] to 'not tell [her] mom or dad' about an exchange between them," Harris texted. "We are saddened that she has reached the level of stating that Marsha and I perform exorcisms. We have a deeply held religious belief system and believe in the power of prayer. That does not entail performing exorcisms."

The Harris family, which runs a day-care center called Growing God's Kingdom in West Fork, sought to adopt the two girls, as well as their older sister, after being approached by the girls' mother who said the Department of Human Services was seeking custody of them after a methamphetamine fire at their home. At least one of the girls had been repeatedly raped, as well.

The oldest of the three, who had previously gone to live at the Harris home, had been diagnosed with reactive detachment disorder, Harris said, a condition that can prevent children from forming emotional bonds with others and can manifest in deceitful and even violent behavior.

Harris said that after five months of difficult behavior, including death threats against the entire Harris family, the girl was put back into DHS custody, but the Harrises eventually adopted the younger two girls in 2012.

Harris accused DHS of fighting him all the way on their adoption. He then accused DHS of withholding information that at least the middle daughter also suffered from reactive detachment disorder. He also accused DHS officials of threatening him and his wife with a child-abandonment lawsuit if they attempted to return the younger two girls to DHS.

He said he was told that DHS could even go after custody of his three biological sons.

Harris said he eventually sent the two younger girls to stay with Stacey and Eric Francis. Eric Francis at one time had taught at the Harrises' preschool. The two girls were later transferred to still another home. A child-abandonment investigation of the Harrises, in the case of the girls, began while the girls were living in the third home. During that DHS investigation, the older girl revealed that Eric Francis had sexually assaulted her, which led to a state police investigation.

Francis pleaded guilty to two sexual-assault charges in November and is serving a 40-year prison sentence.

During the state police inquiry on Francis, the youngest of the girls, then 3 years old, told investigators that Marsha and Justin Harris had both spanked her.

Marsha Harris, according to the girl, used some sort of whip several times, while Justin Harris bent her over outside and hit her with a stick, court records said.

"She said that [parents are] not supposed to spank her," state police investigators wrote. "[The girl] said it made her feel sad when Marsha [Harris] spanked her. It made her bottom hurt ... [She said she is] not [living with the Harrises] anymore because [Justin Harris] spanked her and she cried really loud."

The state police reports do not indicate when the spanking occurred.

DHS spokesman Amy Webb said corporal punishment is not condoned or permitted by DHS for children in DHS custody. She said all foster parents and foster-to-adoption parents undergo training and instruction on not using physical forms of discipline and are taught alternative disciplinary tactics.

"We feel like there are more appropriate ways to discipline and interact with children, especially children who've experienced traumatic situations," Webb said.

Webb said the agency has no say over a parent's disciplinary techniques once children are fully adopted, but she said her agency encourages adoptive parents to refrain from spanking.

The older of the two girls, who was 6 years old when she told state police that Francis had sexually assaulted her, did not mention spanking before asking to end the interview.

She did, however, tell investigators that she was often left isolated in her room while living with the Harris family.

"[She] said that they wouldn't let her out of her room. She said she had to stay in her room; she said she had her books, but when they took away her books she had nothing in there, just her bed," the investigator said. "When asked why she had to move away from Marsha's house, she said 'because I didn't like it.'"

The 6-year-old was kept in a spare bedroom furnished with a bed, a writing desk with a chair in a corner, two video cameras and a microphone attached to one of the cameras, Goldsborough said. The microphone allowed the child to call to the sitter if needed, Goldsborough said in a telephone interview Wednesday.

The child was not allowed to keep toys in the room, the sitter said. There were books, Goldsborough said, but only study books and books with writing assignments such as workbooks, not anything just to read for pleasure.

Goldsborough said she was under strict instructions not to allow contact between the 6-year-old and the child's younger sister.

Goldsborough would arrive at the Harris home after school during her senior year of high school and take over from Marsha Harris and "Marsha's mom," she said. Meals were taken to the 6-year-old, and she was allowed to leave the room only for bathroom breaks while Goldsborough was there, the sitter said.

"While she was in the room, there was Christian music blaring," Goldsborough said. "I did some praying and some crying while I was there, outside [the girl's] door. The whole thing was heart-wrenching."

"When I'd bring her a meal or a glass of water, she was like a little puppy wagging her tail, she was so happy to see somebody," Goldsborough said.

"Her face would just light up, she was so happy, and it wasn't for water. Water isn't that exciting," Goldsborough said. When the child needed to go to the bathroom, she was supposed to say so into the microphone and look into the camera to get the sitter's attention. The child also wore diaperlike training pants in case of accidents, Goldsborough said.

"When I took her to the bathroom, she'd talk all the way there and even while she was in there," Goldsborough said. "She just wanted to talk to somebody. All she really needed was some love."

The child never displayed any worse-than-normal behavior, Goldsborough said. "I never saw anything violent," she said. "They [the sisters] were both little kids. They'd have a temper tantrum if you took something away from them, but nothing that wasn't normal."

There was were some disagreements but never a falling out between her and the Harris family while she worked there, Goldsborough said. She left the job on good terms, she said.

"I followed their rules," Goldsborough said of the Harris family. "I stretched those rules as far as I could, spending more time with her [the 6-year-old] than I had to, but I obeyed the parents' rules."

Goldsborough said she talked to others about the girl's plight.

"I tried to tell people who worked at the [Harrises'] day care, the adults, but they wouldn't listen," Goldsborough said. She never tried to contact the state Department of Human Services directly, she said. "I was pretty naive," she said.

Barred by law from directly commenting on any child's case, Webb said she would expect that a child routinely confined alone and left with no stimuli would result in some action, possibly even prosecution, if the case was reported to the state's abuse hotline.

Jennifer Wells, an attorney for Justin Harris, said the child's account that was recorded by state police was taken out of context.

Wells said the girl was often put in her room alone but wasn't isolated. The girls were kept in separate rooms after their adoptive parents discovered that the two were acting inappropriately, and the Harrises installed alarms on the doors to make sure that the girls wouldn't walk in and out of each other's rooms at night.

When asked why the 6-year-old's things were taken away, Wells said that was a part of a "rebonding technique" detailed in a book about dealing with reactive detachment disorder that was recommended to the Harris family by Ozark Guidance, a regional mental-health provider.

By taking items away from children and then returning them, it can help children relearn how to form emotional bonds with family members, Wells said.