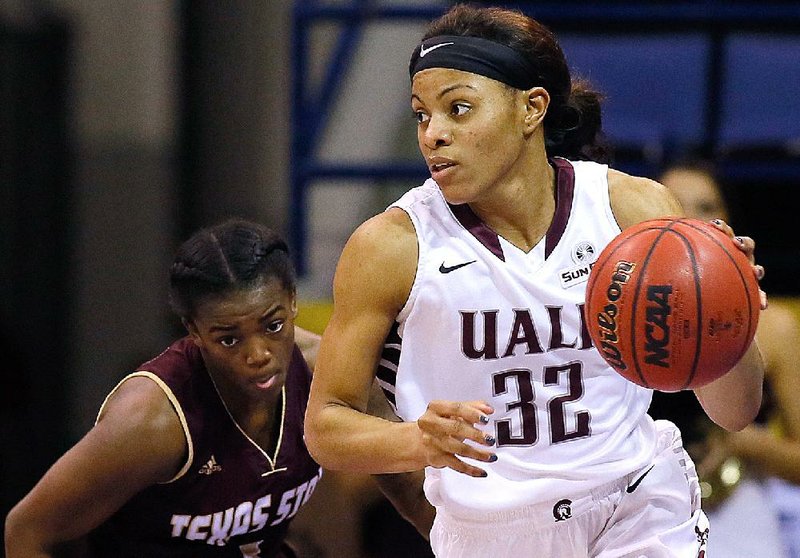 UALR guard Ka’Nesheia Cobbins (32) dribbles past Texas State guard Ayriel Anderson during the second half of the Trojans’ 87-44 victory Friday in the semifinals of the Sun Belt Tournament in New Orleans.

NEW ORLEANS -- Joe Foley says he has one request for UALR's women's basketball team at this time of year.

"Forget anything else that's going on," Foley said. "Focus just on basketball."

His Trojans have maintained a singular focus during the first two rounds of the Sun Belt Tournament, and now they are one victory away from a return to the NCAA Tournament.

Alexius Dawn made five first-half three-pointers and finished with 23 points, Taylor Gault had 18 points and the Trojans turned in one of their best performances of the season while beating Texas State 87-44 in the semifinals Friday afternoon at Lakefront Arena.

UALR tied a program record for victories in a season and set season highs for points, field goals (33), three-pointers (8) and margin of victory (43).

More importantly, it put UALR (27-4) back in the tournament final, where it will face Arkansas State (23-9) at 7 Central tonight with the winner earning the league's automatic NCAA Tournament bid.

Being back on the brink of the program's yearly goal has sparked two clean performances, Gault said.

"We just know that it's one and done," said Gault, a senior who has scored 41 points in the tournament. "We have to set the tone offensively and defensively, so that's what we're doing."

The Trojans wasted no time doing that Friday.

Texas State held Texas-Arlington to 31 percent shooting in Wednesday's quarterfinal victory, but UALR made six of its first seven shots while jumping out to a 17-2 lead just more than four minutes into the game. Dawn, who made six three-pointers in Wednesday's victory over Georgia State, made two in the first four minutes.

Dawn made 6 of 8 threes on her way to a season-high point total.

"I was just getting good looks," Dawn said.

Along with one of UALR's best offensive performances -- its 87 points were the most it's scored in five years -- it held Texas State (17-14) to 30.4 percent shooting and 1 of 11 from three-point range. Erin Peoples, the Bobcats' leading scorer, managed only six points, almost eight points below her season average.

"It's March Madness. Kids play a lot better than they do in the regular season," Foley said. "Everybody is intense, everybody is focused, and there's not a lot of distractions."

UALR gets a chance for a conference title one year after losing 66-62 to Western Kentucky in the semifinals, its earliest tournament exit since 2008.

The Trojans responded with the best regular season in school history. They have been so good that they may reach the NCAA Tournament even with a loss today.

UALR is No. 32 in the Ratings Percentage Index according to the NCAA and has three top-100 victories. When UALR earned an at-large bid in 2010, it was No. 56 in the RPI.

Foley said he believes last year's tournament loss has something to do with what his team has turned into this season.

"I hate losing," Foley said. "Losing last year, it hurts, and maybe it makes us more focused this year. That's a good thing.