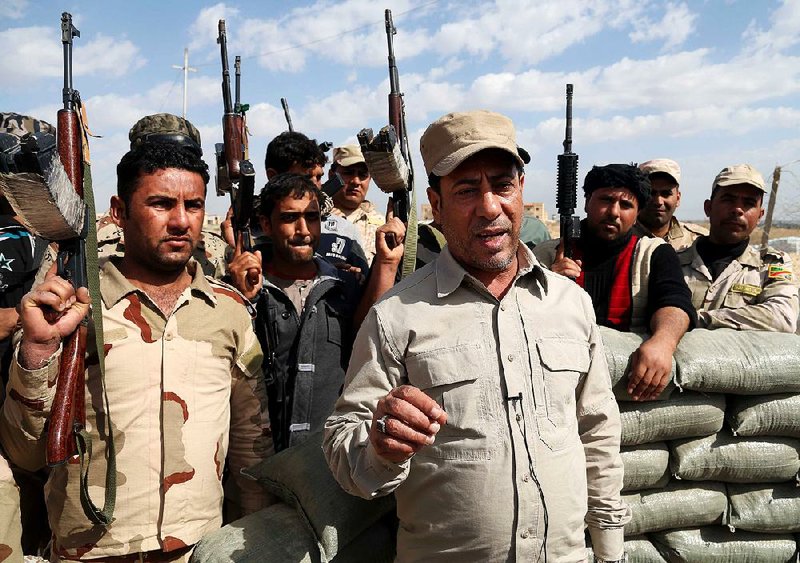 Hakim al-Zamili, a parliament member and head of Security and Defense Committee, right, visits the front line during a battle against Islamic State militants in Tikrit, 130 kilometers (80 miles) north of Baghdad, Iraq, Monday, March 16, 2015. The offensive to retake Saddam Hussein’s hometown of Tikrit began March 2. The city is one of the largest held by the Islamic State militants on the road connected Baghdad and Mosul. Iraqi Interior Minister Mohammed Salem al-Ghabban said Monday that the campaign had halted temporarily to allow civilians in the city to evacuate and to enable troops to clear roadside bombs planted by the extremists. (AP Photo/Khalid Mohammed)

BAGHDAD -- Islamic State militants Monday continued to hold parts of the city of Tikrit against a much larger pro-government force after two weeks of battle, as Iraqi officials said they were pausing their offensive to call for reinforcements and to preserve property and civilian lives.

The slowing of the operation came amid reports that the tomb of Saddam Hussein in the nearby village of Awja had been destroyed in the recent fighting. Its roof appeared to have collapsed, with rubble strewn around the area, footage from The Associated Press showed.

Iraqi officials and allied militia leaders have been saying since last week that they are in control of the battlefield. They said they had surrounded the Islamic State fighters remaining in Tikrit and that full government control would be restored there in a matter of days.

There has been international pressure to avoid civilian casualties and revenge attacks on people or property in an offensive by a mostly Shiite force in a hub of the so-called Sunni triangle. About two-thirds of the pro-government force is made up of the mostly Shiite militias now known as popular mobilization forces.

As the days pass, critics have asked why the government's 30,000-strong force has been unable to dislodge the last Islamic State fighters -- and whether the reduced pace is a bad sign for future efforts to root the militants out of their self-declared capital, the much larger city of Mosul.

"There is a minimum amount of Daesh fighters in Tikrit," said Alaa Makki, a former lawmaker and a member of the mostly Sunni Islamic Party, using an Arabic acronym for the Islamic State. "They are controlling the situation there -- wow!"

"We want to give the people of Tikrit the chance to evacuate their areas in order to save their lives, and also to try as much as possible to preserve the infrastructure of the city," he said in an interview on the state television channel Al Iraqiya.

"We don't want the city to be destroyed, and we want to try to reduce the number of casualties among the security forces," he added.

Officials said the goal was to restore surrounding villages to the control of locals, including Sunnis who have joined the militias.

The footage of Saddam's tomb showed a government fighter standing on its slanting roof, which appeared to have been knocked from its support columns. How and when the damage was done was not immediately clear. Some residents said it occurred in the fall in an Iraqi offensive, but others said that the damage done then was minor.

Saddam's rule was particularly repressive to the Shiite majority, crushing an uprising in 1991. He was jailed after being overthrown by the U.S.-led invasion in 2003 and was executed in 2006 by the Iraqi government. His memory remains a rallying point for Baathist military officers who made common cause with Sunni jihadists against the U.S. occupation and later against the Shiite-led government.

Iraqi officials have said that some of those Baathist figures are still working with the Islamic State and that the tomb had attracted a cluster of the group's fighters. Although Saddam ran a secular government, he is seen by some as a symbol of lost Sunni influence. Some Sunni residents have expressed fears that the militias would unearth the corpse or damage the mausoleum, although some residents said the body was moved to an undisclosed location months ago.

In Al Alam, north of Tikrit, people continued to return to their homes. Footage on Iraqi and other news channels showed scenes of celebration.

But few residents appeared to have returned to Albu Ajeel, to the south, where many militia members suspect residents helped the Islamic State kill more than 1,000 Shiite soldiers.

To the north, Kurdish peshmerga forces reported continued progress against the Islamic State. Miryawan Abdullah, a major general in the forces, said that Monday, the forces had taken over three villages along the road between Baghdad and Kirkuk.

Also Monday, Kurdish officials announced that they were investigating whether Islamic State militants used chlorine in two bombings, on Dec. 26 and on Jan. 28, the AP reported. During the weekend, the officials said residue from another bombing Jan. 23 had tested positive for high concentrations of the chemical in what they said was a laboratory certified by the European Union.

In October, U.S. and Iraqi officials said they were investigating whether the Islamic State used chlorine in September during clashes farther south, in Balad and Dhuluiya. There has been no independent confirmation of the Kurdish assertions.

Information for this article was contributed by Ahmad Salah and staff members of The New York Times.