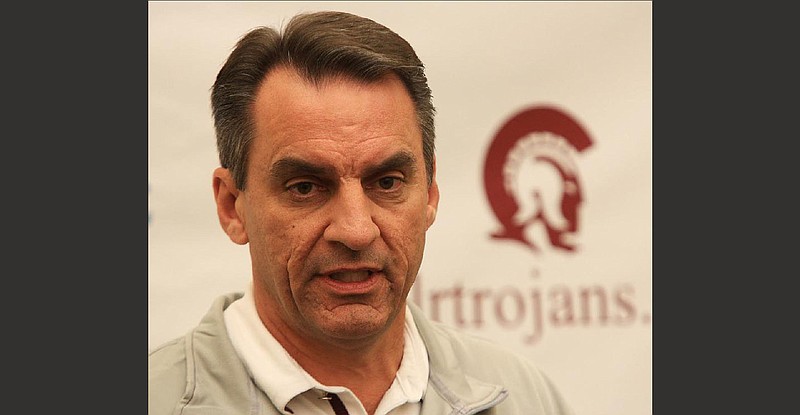 Steve Shields. is shown in this file photo.

UALR Athletic Director Chasse Conque announced Wednesday that Steve Shields will not be retained for the final year of his contract as head basketball coach at the university.

“I want to thank Steve for all he has done for this program, including being a mentor and leader to our student-athletes,” Conque said in a statement.

“He held his players accountable, and his team’s academic achievements are something we are very proud of. This was a tough decision, but one that I felt was best for our program at this time.”

Conque and Shields met Wednesday morning, six days after Shields completed his 12th season as Trojans' coach. He compiled a 192-178 record leading UALR, a stint highlighted by six winning seasons and an unexpected run to a Sun Belt Tournament title in 2011 that sent the team to the NCAA Tournament for the first time in more than two decades.

The Trojans were 13-18 this season, which ended March 12 following a 57-55 loss to South Alabama in the first round of the Sun Belt Tournament. It was the Trojans' second consecutive losing season and third in the last four seasons.

“I’ve thoroughly enjoyed my time working at UALR,” Shields said in the statement. “The relationships that I’ve developed over my 15 years here will always be cherished. I want to say a special thanks to our players and staff who have been outstanding to work with. I’ve also enjoyed working with Chancellor Anderson, and I wish him and Chasse Conque the best moving forward.”

UALR was picked to finish third in the Sun Belt this season, but lost its first four Sun Belt games and didn't get into the conference tournament until winning five of six games late in the season. The Trojans lost their final two regular-season games and then lost to South Alabama 57-55 in the first round of the Sun Belt tournament, which ended up being Shields' final game as coach.

Shields offered no comment when approached at the Jack Stephens Center on Wednesday afternoon, other than to acknowledge his meeting with Conque.

Shields, who became head coach in 2003 after three seasons as an assistant, had one year left on a contract extension he signed in August worth $228,843 per season.