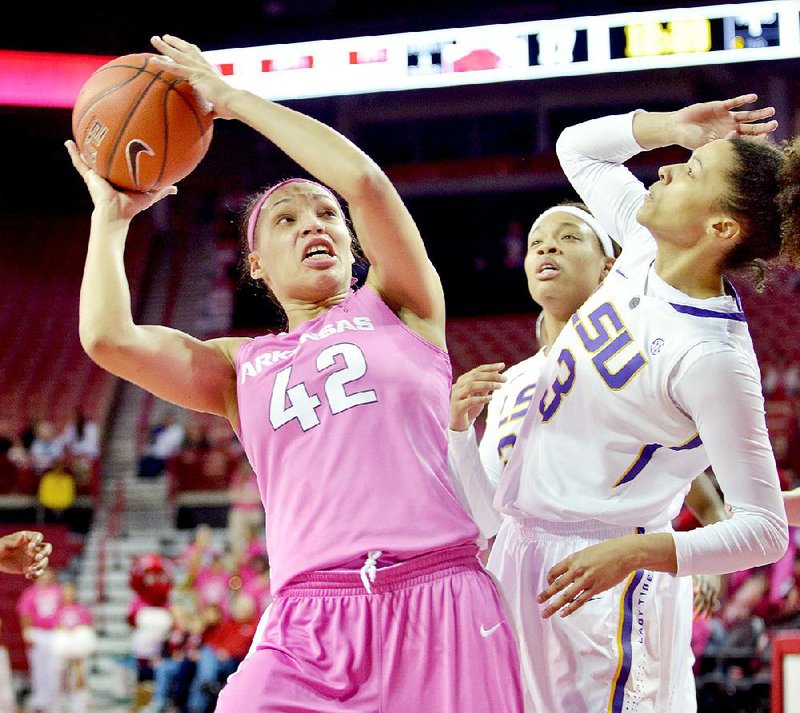 Seniors Jhasmin Bowen (42) and Calli Berna are the only players on Arkansas’ roster who have played in an NCAA Tournament game. The Razorbacks last reached the tournament in 2012, when Bowen and Berna were freshmen.

FAYETTEVILLE -- Arkansas women's basketball coach Jimmy Dykes was confident the NCAA Tournament projections were right and his Razorbacks were going to make the field.

"I just had so much trust in our strength of schedule, our nonconference performance and the fact we had beaten [six] teams that were going to be in the NCAA Tournament," said Dykes, who is in his first season as the Razorbacks' coach.

Arkansas was indeed headed back to the NCAA Tournament for the first time in three years, but Dykes and the Razorbacks still had nervous moments before seeing their name on Monday night's selection show.

"Even if you know you're in, you're going to have anxious moments ... but I know we deserved to be in," Dykes said. "I have no qualms or questions whatsoever about where we're seeded and why we're in. ... I think we were solidly in the entire time in the selection committee's eyes."

The NCAA appearance, the 10th for Arkansas, will give seniors Calli Berna and Jhasmin Bowen bookend entries to the NCAA Tournament from their first and last years as Razorbacks.

"I didn't want to send them out playing in the WNIT," Dykes said. "Had we gone that direction we would have gotten ready to play and poured ourselves into it, but that's not where Calli and Jhasmin belong. They deserve to be in the NCAA Tournament."

The Razorbacks had to wait until one of the last brackets was revealed to see that they had made the NCAA field.

Berna and Bowen said they have told their younger teammates to cherish the NCAA bid.

"I mean, for the last two years we didn't go to this tournament," said Berna, who leads the SEC with 37 minutes played per game, 2.4 minutes per game more than teammates Kelsey Brooks, who is second in the SEC. "We're making sure they know that this is a big deal."

Bowen said calming nerves will be a key element of playing well against the Wildcats at Baylor's Ferrell Center.

Berna has 37 minutes of NCAA Tournament playing time and Bowen has one. Berna had 2 points, 1 rebound and 4 assists in 15 minutes in the Razorbacks' 72-55 victory over Dayton in the first round in 2012. She had 2 rebounds, 4 assists and 2 steals in 22 minutes as Arkansas fell 61-59 to host Texas A&M in the second round. Bowen played one minute and posted no stats in the Dayton game.

"We all needed rest," said Bowen, who is recovering from an ankle sprain she suffered Feb. 26.

"I think our energy was really good in practice because they know what's at stake on Friday," Dykes said. "We have never backed off how hard we've gone, but we have backed off on the number of minutes we've gone."