Potential action, thrills in Insurgent sabotaged by plodding direction by DAN LYBARGER Special to the Democrat-Gazette | March 20, 2015 at 1:49 a.m. 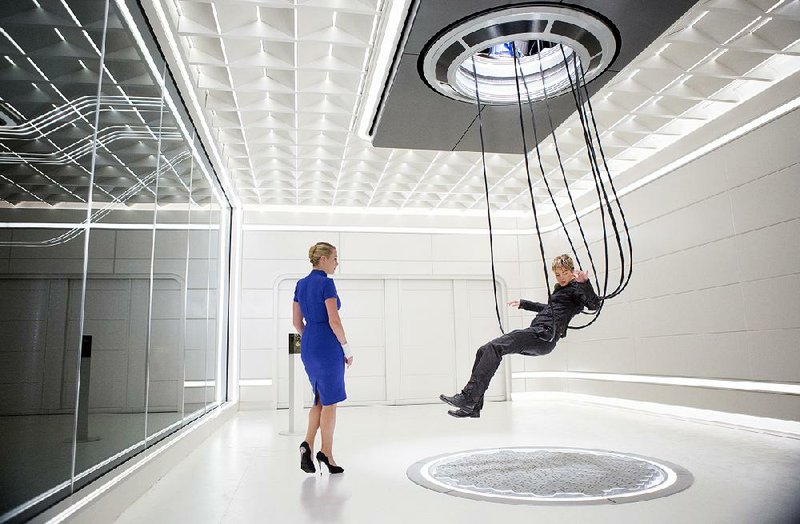 Jeanine (Kate Winslet) is a ruthless leader who means to cleanse society of misfits like the “divergent” Tris Prior (Shailene Woodley) in Robert Schwentke’s dystopian young adult thriller Insurgent.

It takes a unique movie to make Chicago dull. The City of The Big Shoulders can be scary or grim, but it has millions of residents and a vivid history. But the makers of Insurgent -- the sequel to 2014's Divergent -- have managed. German director Robert Schwentke (RIPD) takes over for original helmer Neil Burger and approaches Veronica Roth's young adult novels with the solemnity normally reserved for commemorative readings of the Gettysburg Address.

As a result, Insurgent often feels grim and pompous. Despite some bloody action and brushes with death, there's no sense of exhilaration, tension or fear. Insurgent lumbers from set pieces to exposition to set pieces and to more exposition without ever making the audience care if the misfit gang from the first movie survive a post-apocalyptic civil war.

Rating: PG-13, for intense violence and action throughout, some sensuality, thematic elements and brief language.

Roth's setup does have potential. It's usually easy to identify with outsiders, but thin, sketchy supporting characters prevent the story from coming to life. Familiar actors like Octavia Spencer and Daniel Dae Kim appear but leave little impression. Throughout the film, it's tempting to ask, "who are you and why are you here?" By the end of the film's credits, some of those questions are never answered.

In this installment Tris Prior (Shailene Woodley), her brother Caleb (Ansel Elgort), former intelligence operative Four (Theo James) and annoying loudmouth Peter (Miles Teller) are on the run from the authorities because Tris is divergent. This means that she has the abilities of any of the established factions but doesn't fit into any of them exclusively. For reasons that almost become clear after watching both films, she's a threat to social order.

The de facto dictator, Jeanine (Kate Winslet), has has led a coup that resulted in the deaths of Tris' parents (Ashley Judd and Tony Goldwyn) and their entire faction. She'd like to kill Tris and every other misfit like her. The only thing impeding Jeanine's genocidal ambitions is a glowing metal box that only strong divergents can open.

No, divergents don't have a post-apocalyptic can opener. When they're placed in a simulator, their ability to get through various scary tests will reveal a message. Of course that depends on how well Tris and others survive.

There isn't any suspense because, like Tris, the audience knows the not-so-frightening images aren't real. Schwentke's overreliance on CGIs of concrete and metal crumbling only exacerbates the predictability.

There are three screenwriters credited for Insurgent and the new film is half an hour shorter than its predecessor. It feels longer because Schwentke and the writing crew hit plot points without establishing why they're significant.

Mass murder is a key element in the story for Insurgent. It's regrettable those deaths have so little impact. The Windy City may have several shy residents but not that many boring ones.