Legislators: Not sending amendments to '16 voters 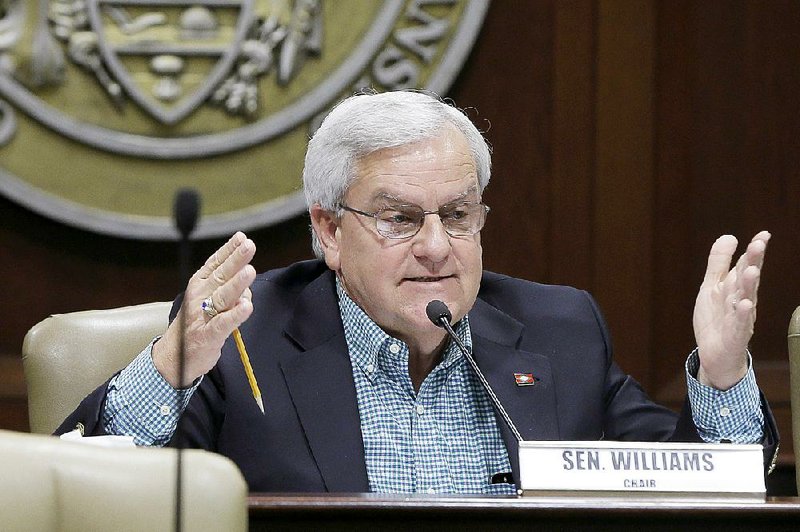 Breaking with decades of tradition, the Arkansas Legislature won't refer any proposed constitutional amendments to voters for the ballot in the 2016 general election, legislative leaders said Thursday.

That's because, they said, representatives and senators couldn't reach a consensus on which of 41 proposed constitutional amendments to refer to voters.

This would be the first time since 1971 that lawmakers meeting in regular session didn't refer any proposed amendments to voters, according to Bureau of Legislative Research records, said the bureau's Vincent Henderson II.

The Legislature meets every odd-numbered year in regular session; it has met in fiscal sessions since 2010 in even-numbered years.

The Legislature could have referred up to three nonsalary-related proposed amendments to voters in next year's general election, and a fourth if it related to salaries.

"At this point, I don't see a path to get us an agreement to a constitutional amendment," Williams told reporters.

"We both have to vote on each other's amendments and we just couldn't get there to identify what those would be," Williams said. He said the joint committee's members also didn't have the time and energy to review and winnow the 41 proposals.

"Since the beginning of this session, there was a priority that was being placed on trying to get some level of reasonable tort reform and have something that did that [would be] referred out to the people. It doesn't look like at this point in time that we are going to be able to get there this session," he said.

Some past tort-law restrictions have been struck down by the state Supreme Court.

Dismang said the majority of the proposed amendments "have merit and probably do some good or enact some change that may be needed, but I don't think it rises to the level of changing our constitution."

Last Friday, Dismang said that the Legislature shouldn't refer any of the proposed constitutional amendments to voters.

The Senate is comprised of 23 Republicans and 11 Democrats.

After four Democrats and four Republicans decided to serve on the Senate State Agencies and Governmental Affairs based on their seniority in November, increasing the likelihood of tie votes, Williams tweeted: "So much for tort."

In 2013, Williams unsuccessfully proposed an amendment to change tort laws.

The Democratic-Republican split of the Senate committee led state Sen. Bryan King, R-Green Forest, to declare in November that "I have a better chance of winning a Brad Pitt look-alike contest than [a proposed] voter-ID [constitutional amendment has of] coming out of that committee."

King sponsored the voter-ID law that the Legislature enacted over the veto of then-Gov. Mike Beebe, a Democrat, in 2013. Last year, the state Supreme Court upheld a Pulaski County circuit judge's ruling that the law was unconstitutional because it added a requirement for voting beyond those enumerated in the state constitution.

House Speaker Jeremy Gillam, R-Judsonia, said there were two or three constitutional amendments that "seemed to pique" the interest of some members.

But he said the House State Agencies and Governmental Affairs Committee might not feel the need to send any amendments to the voters this session.

"I think it looks like there is a high probability that the General Assembly will not refer any constitutional amendments to voters," Gillam said.

"It could change, but that appears to be kind of where the committees are at. And I know that I trust my committee, and if they've made the determination that none rise to the level that need to go to the voters, then I trust their judgment," Gillam said.

Committee Chairman Nate Bell, R-Mena, could not be reached for comment by telephone Thursday night.

• House Joint Resolution 1006 by Rep. David Branscum, R-Marshall, to define the term "infamous crime" in relation to disqualification of people seeking to run for elected office.

• HJR1005 by Rep. Matthew Shepherd, R-El Dorado, to change judicial elections. Rather than letting lawyers run for judge, competitive elections would end and a "merit-based" system would select who is placed on the bench, supporters say.

• HJR1007 by Rep. Mark Lowery, R-Maumelle, to require voters to produce certain forms of identification in order to cast ballots in Arkansas.

• HJR1012, by Bell, to authorize the General Assembly to enact laws that would certify an unopposed candidate for office without having his name appear on the ballot.

• HJR1027 by Rep. Jack Ladyman, R-Jonesboro, seeking to change the terms of office for a handful of county-level officials, including county judges.

Last week, Republican Lt. Gov. Tim Griffin testified before the House committee about a proposed constitutional amendment that would allow the governor to maintain his duties if he traveled out of state.

"I was very interested in eliminating the archaic [constitutional provision] of the governor losing power when he leaves the state, so that's disappointing," Griffin said.

"I feel really strongly that Arkansas taxpayers get more bang for their buck when you have a governor and lieutenant governor who work together, and I think it just makes sense," he said, adding that about 26 states have their governors choose their running mates.

"I will push them for [these ideas] again if given the opportunity down the road. They are a good idea today. I think they will be a good idea two years from now," Griffin said.

Meanwhile, Williams said he expects the Legislature will make substantial changes in how it considers future proposed constitutional amendments.

"I don't know what they will look like, but we need to include [other senators and representatives beyond those on the House and Senate state agencies committees] more," he said.

Dismang said the 2017 General Assembly will decide how it wants to handle proposed constitutional amendments and the process.

One option in the Senate would be to have the full Senate hear from proponents of the proposed constitutional amendments, bypassing the Senate State Agencies and Governmental Affairs Committee, he said.

Information for this article was contributed by Claudia Lauer of the Arkansas Democrat-Gazette.