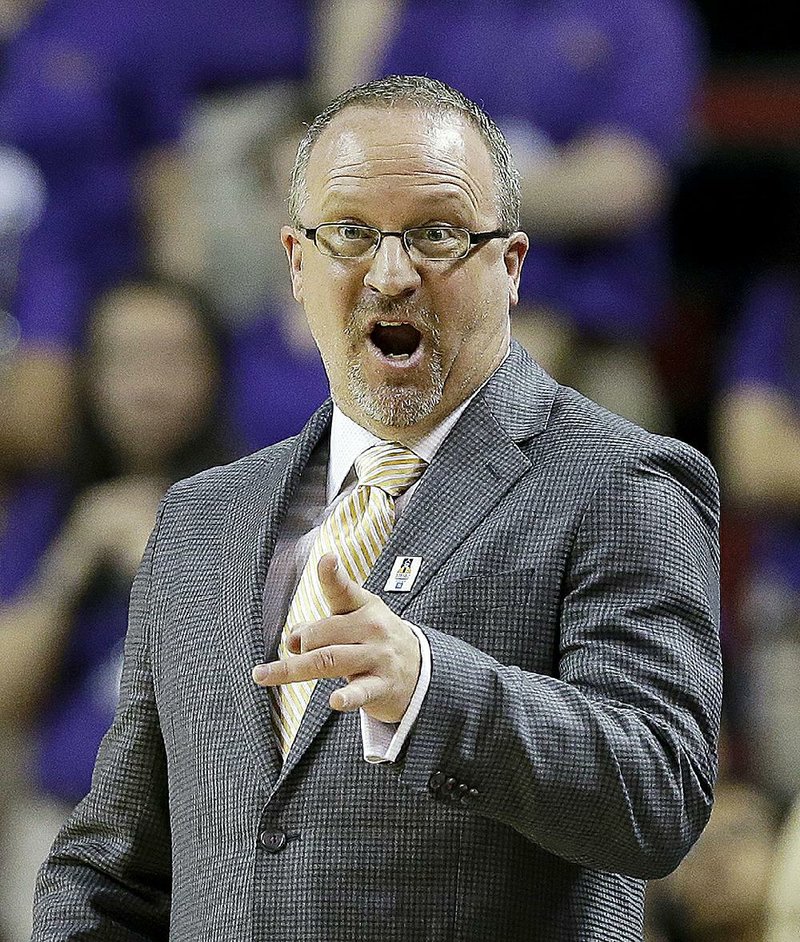 Washington head coach Mike Neighbors in action against California in an NCAA college basketball game in the quarterfinals of the Pac-12 Conference tournament Friday, March 6, 2015, in Seattle. Cal won 69-53.

Mike Neighbors' on-the-job training is paying off these days.

The Greenwood native and former Arkansas high school coach has led Washington's women's basketball team to its first NCAA Tournament since the 2007 season. Washington (23-9), the No. 6 seed in the Oklahoma City Regional, will face No. 11 seed Miami (19-12) in a first-round game at 11 a.m. Central today in Iowa City, Iowa.

The road to the NCAA Tournament has been anything but easy for Neighbors.

He got his start in Arkansas' high school ranks, then spent several years as an assistant in the college ranks before finally getting his shot as a college head coach when Washington promoted him to replace Kevin McGuff, who left to take the Ohio State job in 2013.

Neighbors, 46, said it was his experiences as a high school coach girls basketball coach at Bentonville and Cabot in the 1990s that helped shape who he is now, and during a telephone interview earlier this week he credited former Greenwood boys' basketball coach H.B. Stewart and former Bentonville coaches Boyd Shelton and Scottie Nolan for their guidance.

"I've been lucky to be around the right people," said Neighbors, a 1987 Greenwood High graduate. "I thought I knew everything the first year, but I didn't. They taught me what they knew. I got to learn on the job at a young age."

It didn't end there.

Neighbors eventually moved on to the college ranks, where he worked as an administrative assistant from 1999 to 2001 for Gary Blair at Arkansas before moving on to work as an assistant coach for Kathy McConnell-Miller at Tulsa and Colorado, Susie Gardner at Arkansas and McGuff at Xavier and Washington.

Neighbors said McGuff was the one who really prepared him to become a college head coach.

"Kevin said, 'You're at this point,' " said Neighbors, who is 43-23 in his two seasons at Washington. "In the six years with him, he certainly prepared me. I couldn't do the job I've done without the years of experience with them."

Neighbors went 20-14 last season while leading Washington to the quarterfinals of the WNIT. Washington's 23 victories this season are the school's most since the 1994-1995 season, and have included victories against nationally ranked Texas A&M and Oregon State.

"He's earned it," said Rickey Smith, the girls basketball coach at Fort Smith Northside who coached against Neighbors from 1994 to 1998 and remains friends with him. "Mike has paid his dues. Mike has been there. He's done every job out there."

Neighbors is one of three Arkansas natives coaching in the NCAA Tournament, along with UALR's Joe Foley (Alpena) and Texas' Karen Aston (Bryant). Smith said seeing Neighbors on the biggest stage in women's college basketball is gratifying.

"We all want him to succeed," Smith said.

Neighbors hasn't forgotten his Arkansas roots. He returned to the state last weekend for the high school basketball state tournament finals and said he couldn't walk too far at Bank of the Ozarks Arena in Hot Springs without recognizing a friendly face.

"I can go all the way to Seattle and still have friends in Arkansas," said Neighbors, who was on hand last Friday night when Greenwood won the Class 6A girls state championship.

Senior guard Jazmine Davis averages 15.9 points per game to lead the Huskies, who played in the WNIT the past three seasons before finally making it to the NCAA Tournament.

"I'm really excited for our kids who have been there for four years," Neighbors said. "They can see the life lesson. If you stick something out, good things happen to you. Those seniors have been recruited and have played for four different coaches. A lot of those kids could have left. They didn't. They stuck around.

"To be able to go out as seniors in the NCAA Tournament is great."