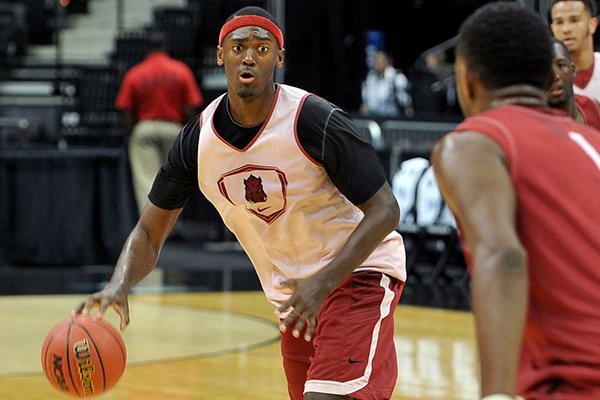 JACKSONVILLE, Fla. -- Arkansas forward Bobby Portis is shooting 54.3 percent from the field this season, but the past three games have been a struggle for the SEC's player of the year.

Portis shot a combined 9 for 36 (25 percent) against Georgia and Kentucky in the SEC Tournament and against Wofford in the Razorbacks' NCAA Tournament opener.

Despite the shooting problems, Portis has averaged 10.9 points in that three-game stretch. He had 15 points and 13 rebounds to help the Razorbacks beat Wofford 56-53 Thursday night and advance to tonight's matchup against North Carolina.

Portis is averaging 17.5 points and 8.8 rebounds this season, so maybe media and fans have unrealistically high expectations for the 6-11 sophomore from Little Rock Hall.

"I feel like people expect me to go out there and get 30 points and 20 rebounds every game, and that's not realistic," Portis said. "With how the defenses are playing me, there's always a man on me and a man in the paint.

"People that know basketball know I can't force the issue on offense. I can't force shots to try to get stats. It's not about that. It's about us winning."

"He's been playing at an unbelievable clip," Arkansas Coach Mike Anderson said. "The guy has been a double-double producing machine night in and night out. Defensively he's been active, blocking a lot of shots."

Anderson said Portis "may have hit that wall a little bit" physically.

"He's been playing a lot of minutes," Anderson said. "Hopefully, he'll have some recovery time where he can come out and put on a good performance. One thing about Bobby, it's not going to be because of a lack of effort. I think we'll see it on full display.

"When you're playing against North Carolina, that tends to give you even a little more extra energy."

"But Mike's best characteristic is his wife," Williams said, referring to Marcheita Anderson. "She's really helped him out a heck of a lot."

Williams said he and his wife have had fun with the Andersons on trips coaches and their spouses take together during the offseason.

"I tried to teach her how to shoot craps one night and she won money, so she thinks I'm a pretty good guy," Williams said with a smile.

The Andersons have been married for more than 30 years.

"I'm very fortunate, very blessed, and we have a lovely family," Mike Anderson said. "She kind of puts the air under my wings and I can fly a little bit."

Anderson said his wife is proof of his ability to recruit well.

None of the Razorbacks had played in an NCAA Tournament game before Arkansas beat Wofford on Thursday night.

"It was a new experience for everybody and some guys were kind of tense," Arkansas senior forward Alandise Harris said. "Now that we're past the first game, everyone should be relaxed and ready to play their best."

The Razorbacks have accomplished a lot of firsts the past two seasons, notably the program's first NCAA Tournament appearance since 2008, its first victory at Kentucky since 1994 and its most SEC victories since 1995.

If Arkansas beats North Carolina, the Razorbacks will advance to the Sweet 16 for the first time since 1996.

"I've never thought about that, I'm just trying to win," Arkansas forward Bobby Portis said. "I haven't thought about what happened 19 years ago."

Junior guard Michael Qualls agreed the Razorbacks aren't thinking about the past.

"I'm not too deep into the Arkansas fun facts," Qualls said. "I just know we worked for where we are right now."

After Arkansas guard Ky Madden had one of his shoes come off during the Wofford game, teammate Jacorey Williams threw it onto the court during a break in the action.

Razorbacks Coach Mike Anderson said he felt "something go right past me" and heard Williams yell, "Here's your shoe" to Madden.

"It whizzed right by me," Anderson said. "It was quite interesting."

Officials stopped the game, huddled and decided to give Arkansas a warning for delay of game.

"I've never seen anything like that," Anderson said. "My question to [Williams] was: 'You threw it to him, but what the hell was he going to do with it?'

"I've witnessed some things, man, but I've never witnessed that."