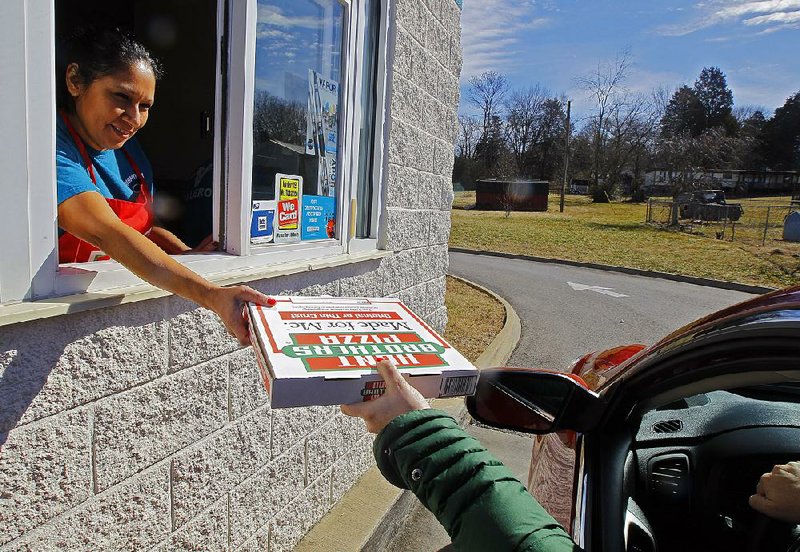 In this Feb. 6, 2015 photo, Maria Witkowski hands a Hunt Brothers Pizza from the drive-thru window to a customer at the Rightway Foodmart in Andersonville, Tenn. Hunt Brothers Pizza is quietly winning over the rural South by slipping into places big-name pizza chains probably couldn’t survive. (AP Photo/Wade Payne)

ANDERSONVILLE, Tenn. -- Hunt Brothers Pizza is quietly winning over the rural South by slipping into places big-name pizza chains probably couldn't survive. It has installed its pizza ovens at so many gas stations and convenience stores that it has more U.S. locations than either Domino's or Pizza Hut.

Sitting across from a pasture, the Rightway Foodmart in Andersonville is a little too far from the interstate to get the type of traffic that could support a free-standing fast-food outlet. But it draws plenty of customers who fish or boat on nearby Norris Lake to its pared-down pizzeria, which requires just a few feet of counter space. And the pizza inspires strong loyalty.

"It beats Pizza Hut and Domino's," said 23-year-old Brittany Bunch, who buys Hunt Brothers about once a week during breaks from her job at a water-damage company. "It's just got more flavor. It seems like, with the others, you're getting cardboard."

While Hunt Brothers may be unknown in many households, it runs television ads during NASCAR races and cable outdoors shows. For several years, it has sponsored Kevin Harvick, who won the 2014 NASCAR Sprint Cup.

On a recent morning at 10:40 a.m., Rightway owner Roy Bruce started sliding pizzas for the lunch rush into a conveyor-belt oven. Each pie starts out frozen, a crust with sauce and a layer of cheese. Employees can add fresh pepperoni, extra cheese and other toppings. The result after about 5 minutes in the 525-degree oven is a bubbling-hot pie with browned toppings that tastes comparable to the big delivery chains' pizzas.

In about an hour, Bruce sold that first pizza and another one in two-slice $2.99 "hunks" from a countertop warming display near his cash register. Nearby, sits a display of fishing hooks, bobbers and jars of bait. Pizza customers included a UPS delivery driver, a woman on her way to lunch with her daughter and a guy in camouflage who confessed he was just coming from the liquor store.

In a typical Hunt Brothers arrangement, Bruce said he paid about $10,000 for his oven, freezer, display case and other equipment and now just pays the Nashville, Tenn.-based company for the pizza ingredients. Hunt Brothers doesn't charge franchise fees or require a contract.

The privately owned company fine-tuned this approach starting in the early 1990s when four brothers who'd worked separately in the restaurant industry joined forces to sell pizzas to convenience stores. Hunt Brothers had 750 locations by 1994, said Keith Solsvig, its vice president for marketing.

"Convenience stores in rural areas were the hub," Solsvig said. "A lot of people coming and going. And a lot of these smaller towns, they didn't really have a lot of other restaurants or other places to eat."

Hunt Brothers now has 7,300 locations in 28 states, with some sites the only dining options for miles. Alabama, Georgia, Tennessee and Texas each have more than 700 locations, Solsvig said. The Hunt Brothers sign is also a common site on the rural roads of West Virginia, eastern Kentucky and other states in Appalachia.

Not all locations are isolated, with Hunt Brothers found at busy highway interchanges. And it's moved into some urban areas, such as Memphis.

The convenience-store model is different from a free-standing restaurant, and a Hunt Brothers outlet is likely to bring in far less than the more than $700,000 an average Domino's makes a year, said Darren Tristano, a restaurant industry analyst with Technomic.

Tristano noted that 7-Eleven offers pizza in some of its 7,800 U.S. locations and that Little Caesars has also had success in rural areas.

While Hunt Brothers declined to discuss company finances, Bruce said he sells about 500 pizzas a month, much of it by the hunk.

Combined with drinks and other convenience items, he estimates pizza customers spend more than $10,000 each month in his store.

Tristano said the simplicity of the setup has helped the company grow. Bruce agreed.

"In a convenience store, you're doing the register, you're doing gas. You're doing so many different things," Bruce said. "It's hard to be able to do pizza from the ground up, making the dough and the whole thing."

Fred England, a food vendor at a furniture factory about 30 miles east of Andersonville, added a Hunt Brothers to his lunch counter about a year ago to keep his customers from looking elsewhere for their pizza fix.

"The problem I had was all these other places were delivering pizza, so I had to come up with something," he said while stopping at Rightway to chat with Bruce.

Angela Moles stopped in to get three hunks of pepperoni pizza and drinks to take to lunch with her daughter. The 35-year-old Andersonville resident said she buys Hunt Brothers about twice a week.