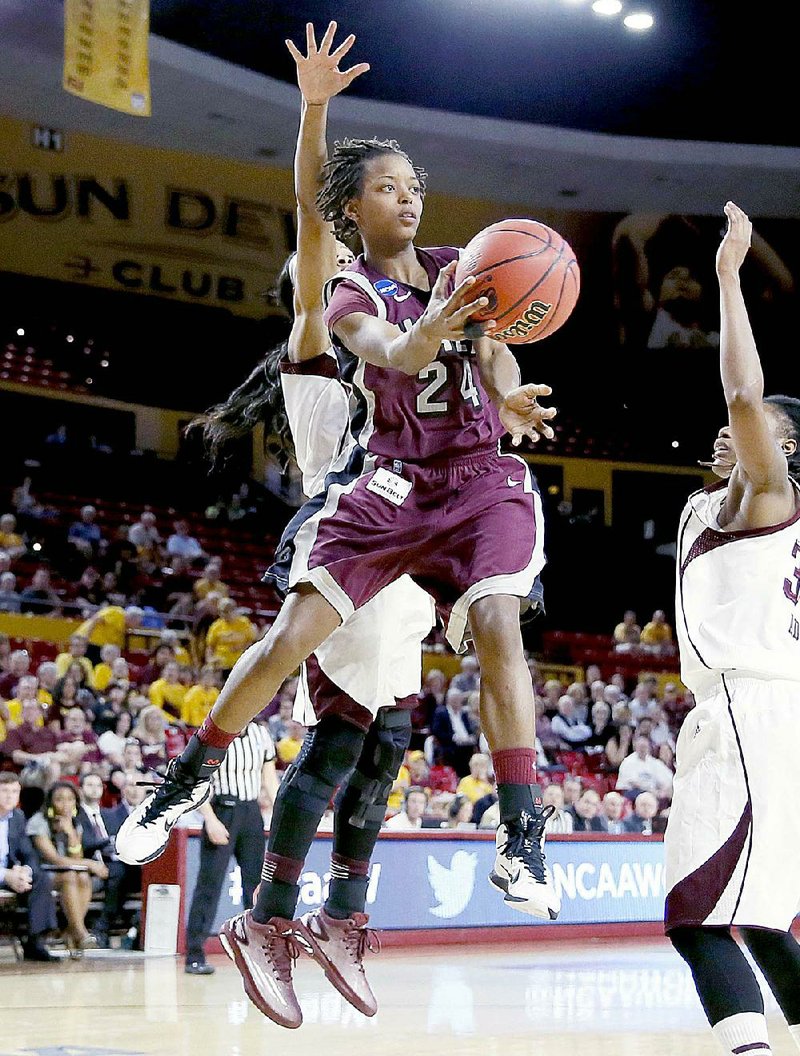 TEMPE, Ariz. -- Texas A&M had the size, the experience and the recent NCAA Tournament success.

The UALR women's basketball team hoped its three senior guards would be enough.

Gault scored a season-high 25 points and Clark had a career-high 22 as 11th-seeded UALR overcame a height disadvantage to upend the sixth-seeded Aggies.

UALR outshot the Aggies 45.5 percent to 37.9 percent while matching them in rebounds with 36. The Trojans had a 20-13 advantage in assists and committed three fewer turnovers than the Aggies, who were making their 10th consecutive tournament appearance and seeking a ninth consecutive victory in the first round.

Neither coach would call the outcome an upset, even though Texas A&M (23-10) was seeded five spots above UALR when the women's bracket was announced last Monday night.

"Not in my mind," said UALR Coach Joe Foley, whose Trojans led for more than 32 minutes. "I told them last night we were going to win. I thought we could score on them."

UALR had no trouble doing that for most of Saturday thanks to Gault, Clark and Cobbins.

Gault made 10 of 17 shots, was 5 of 7 from three-point range and had 4 assists. Cobbins had 4 points, 6 rebounds and 4 assists and didn't have a turnover while playing 38 minutes two days after turning her left ankle in practice.

Clark, who was relegated to spot duty most of this year, came off the bench two minutes into the game and remained in the lineup the rest of the way. She made her first four shots from the field, the last a jumper that gave UALR a 21-12 lead midway through the first half, and made four of her final six shots to help the Trojans pull away.

"We came into the game like this is all or nothing, this might be our last game," Clark said. "What did we have to lose? So we just locked in and had a great game."

UALR endured one offensive lull, when it missed 12 of its last 14 first-half shots as Texas A&M took a 28-27 lead. But the Trojans made 14 of 27 shots in the second half, a statistic Aggies Coach Gary Blair attributed to his team being tired from guarding UALR's motion offense.

Foley said he was a bit worried by the halftime deficit, but Gault said she wasn't.

Blair, who was 5-0 against Foley going into Saturday, didn't offer any excuses.

"I'm sorry we didn't give you an 'A' game today," Blair said. "Arkansas-Little Rock did. They were the best team on the floor. It had nothing to do with injuries or missed shots or whatever. Right now, they're playing better basketball than us."

The Aggies mounted only one serious charge Saturday. Courtney Williams scored five of her 23 points in the final 4:06 of the first half when A&M outscored UALR 9-0. Her baseline jumper with 11 seconds left gave the Aggies a 28-27 lead going into halftime, and she scored the first basket of the second half to give the Aggies a 34-31 lead.

Gault answered with a three-pointer to tie the game at 34-34 and the Trojans never trailed again, thanks in large part to three more three-pointers by Gault. One put them up 40-34, another made it 45-38 and the last one as the shot clock wound down made it 56-50 with 5:25 left in the game.

Even Foley, who has watched Gault score every one of her 1,963 career points, was impressed by her performance.

"Under this situation and the game we're in today, the pressure, I mean, she's got ice in her veins," Foley said. "She's unbelievable at what she does."

UALR was so good offensively that it almost overshadowed its defense. The Trojans didn't let anyone other than Williams and Walker (10) score more than nine points.

Now Foley gets to watch Gault, Clark and Cobbins play another game on Monday night.

The Trojans can advance to the NCAA Tournament Sweet 16 for the first time when they face No. 3 seed Arizona State (28-5) at 8 p.m. on the Sun Devils' home court. Arizona State advanced with a 74-55 victory over No. 14 seed Ohio.

"They were unbelievable today the way they played offense," Foley said of Gault, Clark and Cobbins. "It was so much fun to watch."