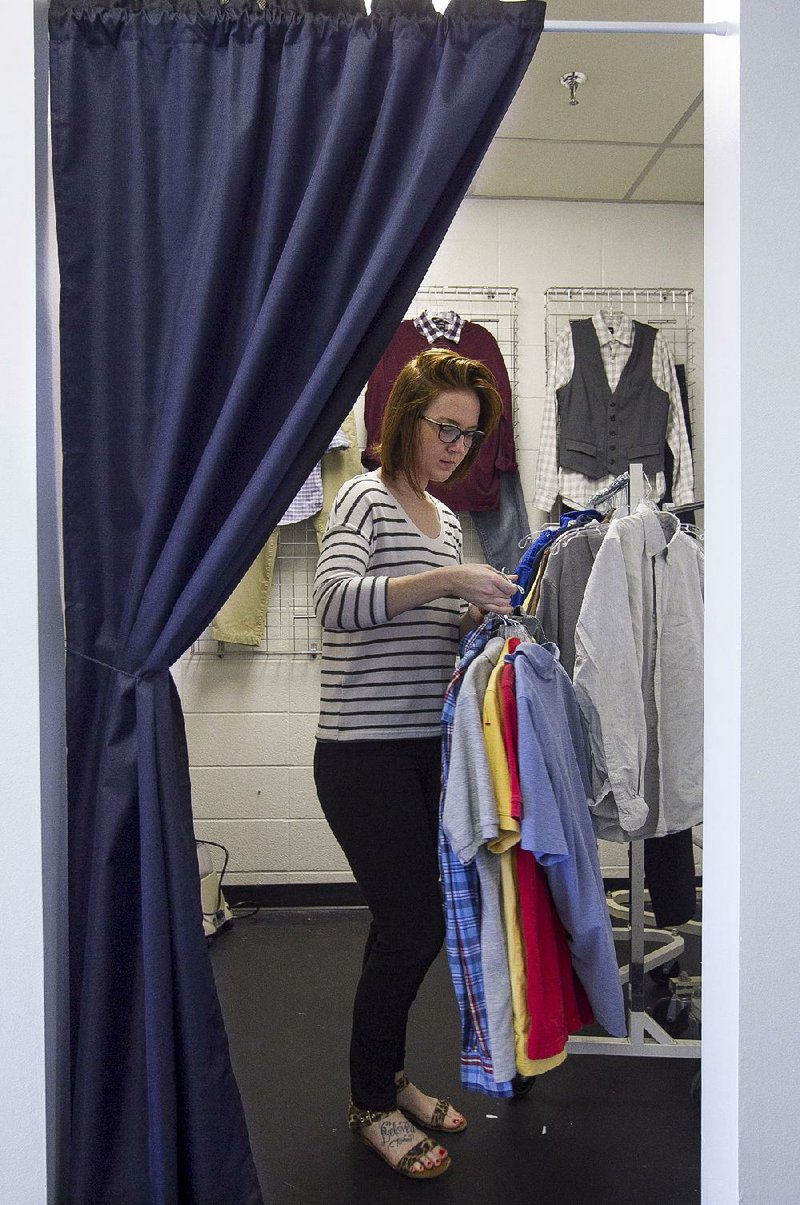 Arkansas Democrat-Gazette/BENJAMIN KRAIN --3/17/15-- Stylist Amber Taylor puts together outfits for clients of her and David Allan's internet startup Tagless Style. The company is partnering with Goodwill Industries in Little Rock to have first pick of donated clothing to offer stylized wardrobes for it's clients.

Tagless Style, a subscription men's online styling service based in Little Rock, should reach up to 5 million customers over the next two years with the help of $250,000 in seed funding from XCelerate Capital, said XCelerate founder and managing partner Rod Ford.

Started by Few, a downtown Little Rock design and development company, and Tagless picked up 60 customers after testing its concept last fall under the guidance of the ARK Challenge 4 accelerator program for technology startups. Without spending a dime, Tagless sent out a mass email and enlisted some 60 customers who were willing to give their credit-card information to try the service, Ford said.

Tagless partners with Goodwill Industries of Arkansas to buy gently worn and like-new men's clothing. The company launders and mends items to department store-like quality, then matches pieces for resale on the Tagless website, which was relaunched today with a new look and new prices.

The intent is to make buying secondhand clothing easier and more affordable, said David Allen, the company's 24-year-old CEO. The concept also reduces the environmental impact of discarded clothing and disrupts the cycle of clothing companies profiting from low-cost labor in developing countries, he said.

Tagless hopes to expand soon its work with Goodwill to surrounding states and eventually have a presence from coast to coast.

Customers are sent shirts, pants, vests, jackets and accessories based on their answers to questions about their personalities, preferences and lifestyle. A Tagless employee combs the big, blue Goodwill bins for an hour twice daily and after laundering, on-site stylists create fashionable outfits.

As for the company's name, "we like the image of clothing not having a price tag on it," said Allen, sporting a Tagless blue gingham button-down shirt and belt that were "up-cycled" from Goodwill.

Tagless Style's model was that of Trunk Club, an online marketplace that employs stylists to pick out clothes. The shopper then previews them online and customers send back any unwanted items if they're unhappy once they see them in person.

Tagless may not be looking at the prices, but it does pay attention to brands.

"It's really like J.Crew/Gap/Banana Republic -- that level is really what we're looking for. And there's a lot of those items out there," Allen said.

Tagless now offers two items for $29.99 or four items for $49.99. Customers can sign up to receive clothes monthly, quarterly or just to try the service. To further the social impact, customers can use the box the clothing arrives in for their own donations to Goodwill.

Tagless' inventory now includes some 4,000 pieces. The company's goal is to eventually include women's and children's clothing, as well.

The Goodwill Resource Center, a 500,000-square-foot building on Scott Hamilton Drive, provides floor space for Tagless' offices and operation. In return, Goodwill is a partner, along with Allen; David Hudson and Arlton Lowry from Few; and Ford. XCelerate, a capital fund, uses incubator programs such as the ARK Challenge to find emerging growth companies like Tagless.

"We're looking for businesses that are very early stage but we think have some type of innovative advantage in the market," Ford said. Seed funding for emerging companies is difficult to find in Arkansas beyond what the ARK Challenge provides, which is just $25,000 to $50,000 he said.

"That was just enough for someone to go off and market-test an idea," Ford said. Little Rock-based XCelerate's investment should help carry Tagless through the next two years. At that time, XCelerate will help get larger investors onboard who are willing to pony up another $3 million to $4 million.

"We already have a network, so we actually kind of know who's going to invest," said Ford, a self-described "serial entrepreneur."

Tagless' competitive advantage, he said, is that it's a business with a social conscience. The company's tagline is "Look Good. Feel Good. Do Good."

The company employs just eight people, including the guys at Few.

Brian Marsh, the Little Rock Goodwill's chief operating officer, said the partnership "allows us to reach individuals who may not know who Goodwill is and what we do.

Brian Itzkowitz, president and CEO of Goodwill Industries of Arkansas, said Goodwill already has an online presence at shopgoodwill.com and through the Amazon bookstore, but Tagless gives the organization a new way "to hit some folks who would not ordinarily think about shopping at a Goodwill."

A demographic to which he refers are millennials, also known as the millennial generation or generation Y, people born the early 1980s to the early 2000s. A recent article in Forbes magazine estimates there are 80 million millennials in the United States alone, representing about one-fourth of the population, with $200 billion in annual buying power.

The author noted that 75 percent of millennials said that it's either fairly or very important that a company gives back to society instead of just making a profit.

"They are sick and tired of corporate greed and are still recovering in the aftermath of the financial crisis. Millennials love brands that support their local communities and would rather purchase from them than competitors," wrote Forbes contributor Dan Schawbel.

When Tagless signed up to participate in the ARK Challenge last fall, officials with the business incubator were more confident in the Tagless management team than they were sold on the business concept.

"When it comes to entrepreneurial ventures, there's often a debate about what's more important -- the concept or the team," said Warwick Sabin, director of the fall 2014 ARK Challenge. "I lean heavily on the side of the team because I think that certain people with certain skills, creativity and determination can can make just about anything work."

Allen participated in the fall ARK Challenge with different startup, Acorn Hours (a service that helps schools track community service hours) but was snatched away by the guys at Few after the 14-week challenge was over.