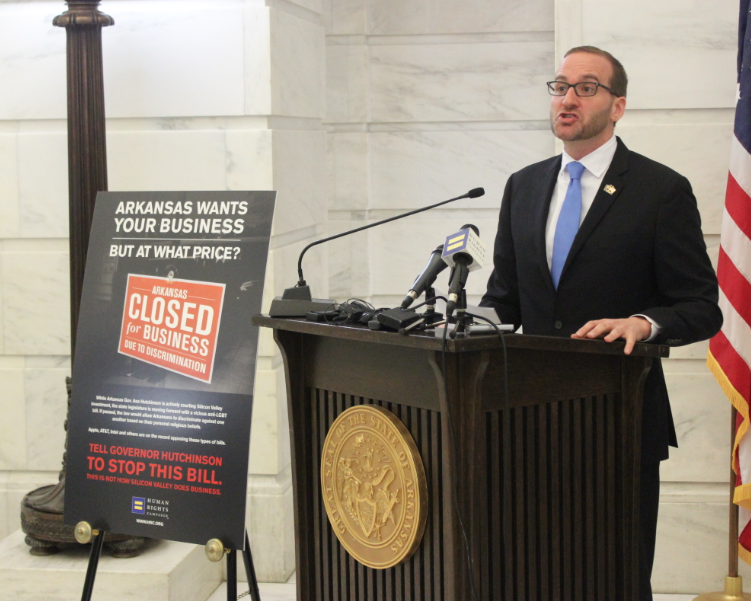 LITTLE ROCK — The nation's largest gay rights group is stepping up its opposition to a religious protection bill in Arkansas, with an ad targeting Silicon Valley while the state's Republican governor tries to lure more high tech industry.

The Human Rights Campaign on Thursday announced it was running a full-page ad in the San Jose Mercury News highlighting its opposition to a measure that would prohibit state and local government from infringing on someone's religious beliefs without a "compelling government interest." The bill could go before the state Senate as soon as Thursday afternoon.

The group argued the bill undermines Hutchinson's effort to attract more technology jobs, and noted Apple's opposition to the bill. Wal-Mart has also expressed concerns about the proposal, saying it sends the wrong message about its home state.

The group spoke out against the bill, calling it discriminatory, at a news conference at the state Capitol shortly after Gov. Asa Hutchinson addressed the media to announce new Arkansas Economic Development Commission Director Mike Preston.

Hutchinson said he intends to sign HB1228 if it makes it to his desk in the version he last saw, saying he believes it's a bill that puts a "high priority on religious freedom and recognizes that as part of the balance."

Chad Griffin, president of the Human Rights Campaign, and other supporters of the group urged Hutchinson to change his mind.

"Do what you know in your heart is right," Griffin said, addressing Hutchinson, who was not present at the event in the Capitol rotunda. "If you really care about jobs and economic development and basic decency, governor, we call on your to do the right thing and veto this hateful bill when it gets to your desk."

Rev. Maxine Allen of the United Methodist Church in Little Rock called the bill "pure and simple" discrimination while Matthew Bell, owner and head chef of the South on Main restaurant in Little Rock, said his business is "open to anyone and everyone."

"And it makes me a little sad that I live in a state where I have to tell you that," he said.