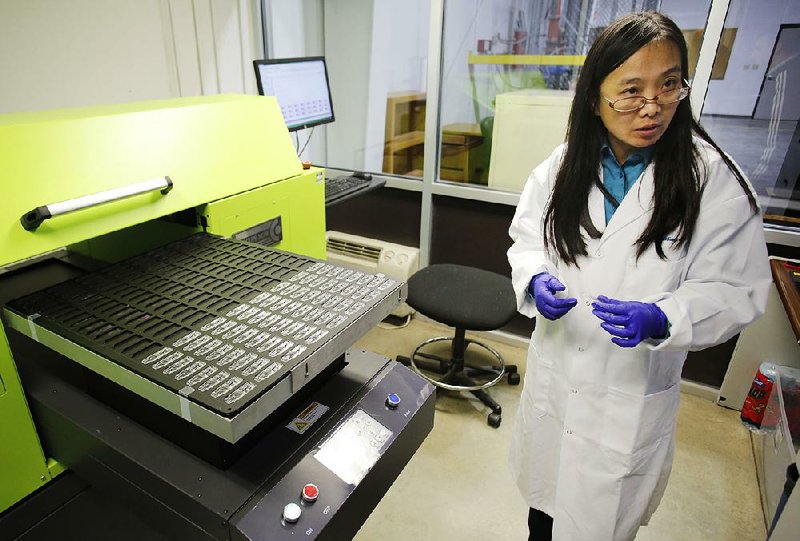 Kevin Clark routinely had 12-hour commutes to work, estimating he spent more time sleeping on jets than beds as the chief executive officer of a Miami-based diagnostic equipment manufacturer. 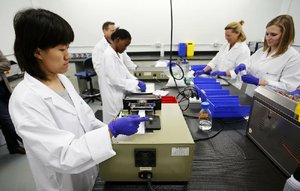 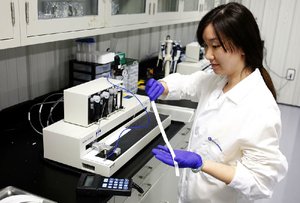 Photo by David Gottschalk
Weiwei Wang, lab technician with NOWDiagnostics Inc. of Springdale, applies a coating on a fiberglass membrane for an Adexus Dx, a device that pricks a patient’s finger, absorbs a blood sample and produces a test result in minutes. 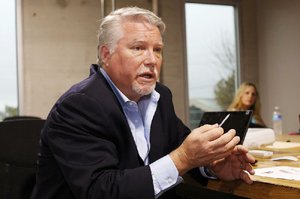 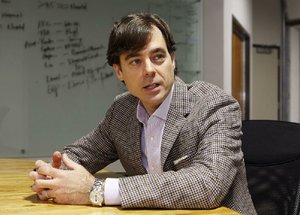 He bounced between the company's multiple facilities in the United States and abroad, working two-week stints in places such as England, Italy, France, Brazil and the Czech Republic. The constant travel presented some obvious challenges, but the reality didn't truly sink in until Clark flew home to Northwest Arkansas on Christmas Eve 2012.

His wife picked him up at the airport with an update. He had been gone for 326 days that year.

"That was kind of an awakening for me to go, 'OK, I need to do something different,'" Clark said.

It also served as an important moment for NOWDiagnostics, a Springdale-based company attempting to shake up the medical industry with technology that promises a fast, accurate and convenient method of diagnostic testing. Clark, a Springdale native and University of Arkansas alumnus, left his previous position in July 2013 and began his role as CEO at NOWDiagnostics a few weeks later, leading a company that manufactures one-step blood test devices that founder and chairman Jeremy Wilson described as a "full-scale laboratory inside a little piece of plastic."

The Exude pregnancy test recently received 510(k) clearance from the U.S. Food and Drug Administration, paving the way for NOWDiagnostics to market the product to health care professionals in the United States. It is one of six diagnostic tests produced by the company to receive a CE mark overseas as well, certifying it has met European Union health, safety and environmental requirements.

"I think it's going to be very disruptive to the current health care system," Clark said during a tour of the company's 22,000-square-foot facility. "In a really good way. We'll be able to get the results quicker, faster, to the patient, at the patient level and ultimately over-the-counter where somebody can test themselves in the privacy of their own home."

That was the goal when the idea of developing a one-step test to diagnose health issues in minutes was brought to Wilson, who is also the CEO of Bentonville-based investment fund NewRoad Ventures.

Wilson, who previously worked in financial services for Wal-Mart Stores Inc. and as the chief operating officer and chief accounting officer for digital marketing agency Rockfish, was intrigued by the possibilities. But he had no experience in medical diagnostics.

So Wilson began searching for someone familiar with the technology and was introduced to Clark, who was still in his role as the CEO at ERBA Diagnostics. Prior to that position, he had been responsible for the development and clinical trials for 18 diagnostic test kits with Immuno Vision Inc., which he founded in 1987, and its parent company IVAX Diagnostics.

Eventually, NOWDiagnostics began operations in 2013 with three people -- Clark; Vicki Thompson, director of production; and Michele Roe, director of quality -- sharing one table. It didn't take long for the company to grow and manufacture AdexusDx, a two-inch device that can prick a patient's finger, absorb a small blood sample and produce a result in five to 15 minutes.

"Everything is built into it," Clark said. "So what used to require an entire laboratory to do the test, it's all being done inside this housing. And you still get the same sensitivity, specificity, accuracy and precision as you do at the reference laboratory running the big equipment to be able to do it."

Over-the-counter availability to test common illnesses was the original concept for the device and remains the company's long-term goal, Wilson said. But NOWDiagnostics recognized the wide-ranging impact its test kits could have in professional health care settings as well, eliminating the lengthy process of drawing blood, outsourcing it to labs and waiting two or three days for results.

Clark believes one need can be immediately addressed in emergency rooms, pointing to a recent piece in Clinical Chemistry that called for "products with improved performance characteristics" in pregnancy testing. Clark said the AdexusDx blood test can detect pregnancy 24-to-36 hours post-implantation, which is from two to eight days earlier than most urine-based tests. It also can curb the number of false positives that can come with urine tests.

"The idea there is if you think you've had a cardiac event, you call the hospital," Wilson said. "When the ambulance picks you up, they give you that test on the way to the hospital. By the time you get to the emergency room they know if there was a cardiac event."

The Arkansas Economic Development Commission recognized the potential in NOWDiagnostics, which qualified for an Equity Investment Tax Credit. The incentive targets new, technology-based businesses paying wages in excess of the state or county average, allowing them to offer a tax credit to investors purchasing an equity investment in the business.

Spokesman Scott Hardin said the AEDC approved NOWDiagnostics for an equity raise of $6.6 million, which means the total amount of tax credits available is $2.2 million. Hardin added that $450,000 of the possible $2.2 million was issued in 2014 and the balance is expected to be issued this year.

"AEDC looks forward to continuing to work with NOWDiagnostics as the company grows in Arkansas," Hardin said in an email. "We appreciate the significant investment the company made in the state along with many high-paying jobs it created."

NOWDiagnostics currently has 14 employees, most of whom came on board after Clark reached out to two Arkansas professors. He said there would be 10 to 12 positions available and received 200 applicants, hiring employees with degrees that range from chemical engineers to a Ph.D. in molecular biology. NOWDiagnostics has provided each with a local laboratory to work in.

"We found a bunch of really bright kids that wanted to stay in Northwest Arkansas," Clark said.

There's plenty left to accomplish as NOWDiagnostics continues to develop products and seek clearance for additional tests in the U.S. and abroad. Clark hopes to have 11 more tests with CE marks in Europe and three more receiving FDA clearance by the end of the year.

He described the process as lengthy and challenging, especially when the time comes to demonstrate that devices are ready for over-the-counter distribution. But Wilson is confident the end result will make the health care system more efficient by giving patients and health care providers access to information faster than before through other methods of diagnostic testing.

In the long term, Wilson believes that will be accomplished with a combination of over-the-counter and point-of-care distribution for the devices. Either way, he's confident the device will be a success.